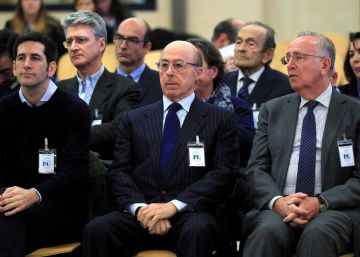 The former president of Pescanova, Manuel Fernández de Sousa, starred on Wednesday the bankruptcy lawsuit of the company, which left a capital hole of 1,667 million euros. Whoever was the almighty employer of the multinational assumed some guilt – none related to the eight crimes charged to him – tried to divert others to the auditor and the CNMV, he was warned several times by the court for not specifying his answers and defended his administration . "I am the most injured, I have lost everything," he said.

The Anticorruption prosecutor Juan Pavía had to be used thoroughly to interrogate Fernández de Sousa, who responded with circumlocutions, going back 30 or answering something other than what was required. "This is what the prosecutor asks," the president of the court who judges him at the National Court had to say more than once. The former president of Pescanova admitted having made mistakes, such as not selling the salmon business on time, or taking the company to a pre-contest to renegotiate the debt. "It must have been a contest," he said.

In spite of that he also defended his management: “Companies do not die for losing money. They die by treasury. The first thing we had to do was protect the jobs; We had an obligation to try to renegotiate the debt. ” Fernández de Sousa presumed that all Pescanova suppliers charged and not a single job was lost. "We will not have done so badly," he said. The Prosecutor's Office asks for 28 years in jail for him for eight crimes, including misrepresentation, fraud and punishable insolvency. He is considered the most responsible for designing an “unsustainable pyramid mechanism” to finance the company, which was in fact insolvent.

Fernández de Sousa said that, as president, he was ultimately responsible for all decisions and assured that, had the liquidity problems been addressed in time, the group would not have reached the point of no return. What he did not do was explain the treasury problems that surfaced in February 2013, when he summoned four shareholders, two days before a board of directors, to ask them 50 million euros to meet financial commitments that had immediate maturities. Up to three times the prosecutor repeated the question, formulated in a different way: “What were the treasury problems?”, “You don't know what treasury you had?” And “How much did Pescanova have at that time to pay?” He wanted that I will report the reaction of these shareholders to the evidence that the company had no liquidity or to pay a debt due and if they asked for confidentiality.

In that council the accounts of 2012 should have been approved, which the auditor had taken for granted without qualifications with a positive result of 36.6 million (which in reality were 791 million losses as it was learned later). The directors refused to approve them upon learning of the meeting between Fernández de Sousa and the shareholders and the company went to a pre-contest.

Despite repeating that the last person responsible for the decisions made in Pescanova, the former president told the BDO audit, which had been reviewing his accounts for 10 years: "We never received any complaints from BDO that they could not do their job." He also said that "there were errors in the BDO audit and I cannot rate them otherwise," according to Europa Press. Fernández de Sousal also recalled that the reviewer The auditor's job is the National Securities Market Commission (CNMV), which he said never received any comments: "In 10 years I was never told: you have to correct this because it is wrong. ”

The Prosecutor's Office asks for the former president of Pescanova, in addition to the 28 years in prison, a fine of more than 22 million euros for makeup the company's accounts to hide a million-dollar debt to investors and regulatory bodies and to continue accessing financing. According to the prosecution's statement, in 2010 and 2011 Pescanova had a debt three to four times higher than what it declared.

The CPI falls to 0.6% in July and adds four consecutive months in negative