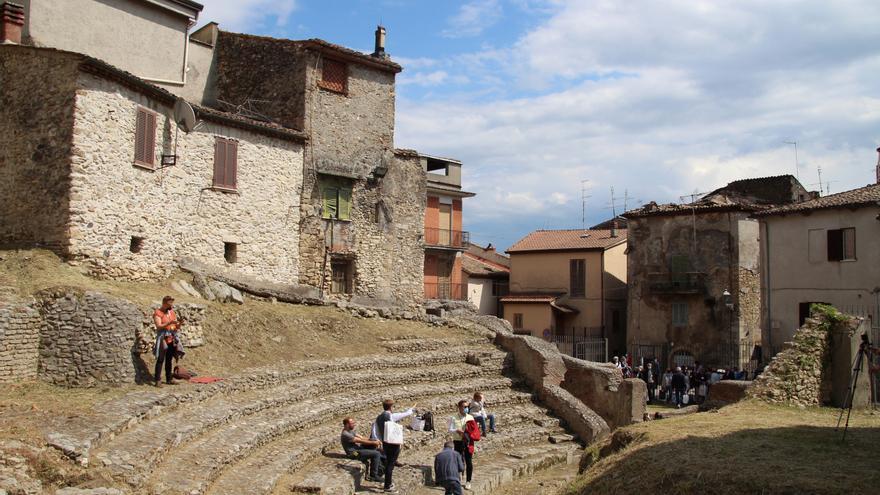 Ferentino (Italy), Jun 5 (EFE) .- Ferentino is destined to become another Italian tourist town. Just one hour from Rome, this millennial little "gem" with ruins and buildings from all eras seeks to escape from anonymity, pushed by the restoration of its Roman theater that begins next Monday, a "symbol" of Italy's "cultural renaissance. after the pandemic ".

Built by the Hernici on a hill in the valley of the river Sacco, flanked by a perfectly preserved wall, cradle of unique stories, with a cathedral and medieval churches ... Ferentino already had all the elements to be a tourist; it only lacked funds to carry out an ambitious refurbishment project.

"When you walk (through this city) you can see beautiful realities. The walls speak, they tell us a story," says Rosario Santanastasio, national president of Archeoclub d'Italia, a non-profit association in favor of conservation. cultural and historical dissemination.

Thanks to an investment of one and a half million euros from the Ministry of Culture, the Roman theater of the 2nd century AD will begin to change its appearance this Monday little by little, with the idea of ​​becoming one of the main attractions of Ferentino, in the province of Frosinone.

Among its quiet streets, this small city of barely 80 square kilometers and 22,000 inhabitants, treasures traces of all times, as Efe notes in a visit organized by Archeoclub d'Italia.

The slow operation of the Italian administration and the lack of a solid project have lengthened for years the wait for the rehabilitation of the Roman theater and its adaptation for tourism.

Discovered in 1921 in a private garden, the theater is embedded between houses that the inhabitants of the city built for centuries, oblivious to the treasure that was hidden under the foundations.

It dates from the time of the emperors Hadrian and Trajan and it is estimated that it could hold about 3,500 spectators. It is 12 meters high and 54 in diameter, although the entire area has yet to be excavated.

Now largely hidden by undergrowth, the theater will be a "symbol" of Italy's "cultural renaissance after the pandemic," explain Santanastasio and the president of the Ferentino headquarters of Archeoclub d'Italia, Antonio Ribezzo, who will give the small town the necessary boost to enter the long list of Italian towns that are well worth a visit.

Literary sources speak of the territory of Ferentino from the 6th century BC, before the birth of Ancient Rome, when the Hernic people - who inhabited the Italian region of Lazio - raised the city, narrates Ribezzo.

The oldest constructions, the wall and the acropolis, are surprising for their good conservation, but they also witnessed stories such as that of the city's patron saint, San Ambrosio Mártir, whose image is now present on balconies throughout the city as a sign of union and hope in the face of the pandemic.

This Roman centurion, called to fight the Christian religion in the 4th century AD, ended up converting to Christianity, which is why he was imprisoned on the Acropolis until his beheading.

At the most important gate in the wall, the Porta Sanguinaria - named for being the place through which those condemned to death, such as the patron Saint Ambrosio, left the city - were joined by others from different periods and styles.

From the same period as the acropolis is the Roman market, one of the first examples covered, which served as "a model to create the famous Trajan markets of Rome", in the Imperial Forums, he explains to Efe Ribezzo.

Medieval architecture also plays a fundamental role in Ferentino's heritage: the basilica-cathedral, dating from 1108, overlooks the Sacco river valley from the Acropolis square.

Other churches, like many things in Ferentino, appear at the end of some of its slopes or hide behind houses that are largely empty for being the second residence of many Romans.

Ferentino, which today has hardly any bars or tourists, does not want to be less than so many other Italian towns.

If it manages to sneak into the vast list of tourist attractions in Italy it will be thanks to its beauty and its ancient history. As their motto says, "the future (to him) comes from afar".