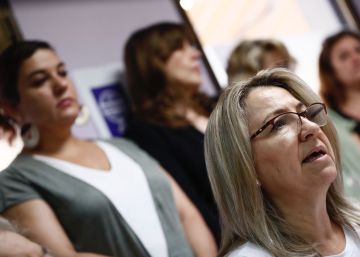 Four women killed within 48 hours. Two orphaned children after witnessing how his father killed his mother, Sandra, his aunt, Alba, and his grandmother, Elena, on Monday. in Pontevedra. Two other girls, now orphaned, were also ahead when Tuesday was killed her mother, Adaliz, in Madrid. He was killed by his partner, whom he had denounced four times in the last decade. The summer of 2019 ends among the most terrible in the count of sexist violence, with 42 women murdered, the worst figure in five years.

The rebound in cases and the “denialism” of the ultra-right-wing Vox party regarding violence against women, which the World Health Organization considers “a global health problem of specific proportions,” has led different feminist organizations to convene for this Friday afternoon the "feminist emergency". They advance the protests of November 25, international day against gender violence, and provide for concentrations in more than 200 locations. The motto is The night will be violet. The summoners ask the women to wear purple lights as a repulsion.

“This is no longer an alert. We declare the feminist emergency ", denounced last July the Feminist Platform of Alicante. This group started the call to which more than 70 organizations from all over Spain have joined." This summer has prevailed barbarism: murders, rapes, harassment, pederasty, herds, "they added in their statement.

In Madrid, 36 of these platforms have presented this Friday morning their own manifesto in which they warn "of the dangers of the macho right-wing that slipped into power and in the institutions of other similar rights." They criticize that Vox appeared Thursday in the minute of silence for the murder of Adaliz Villagra with his own banner in which he denied gender violence. The far-right party defined the act convened as an "advertising campaign on the left." There was a discussion between the councilor of Vox Javier Ortega Smith and the mayor of Madrid, José Luis Martínez Almeida, in which the latter agreed with Vox that he is also "against the gender ideology and feminism of 8-M".

"It is very serious that the PP joins the Vox postulates talking about gender ideology," says Yolanda Besteiro, of the Federation of Progressive Women. Besteiro believes that there is "a clear relationship of cause and effect" between the increase in murders and the statements and actions of Vox. "After cutting year after year the number of fatalities, we see a rebound after the denial speech of important political parties with international support."

The existence of a specific violence against women has a broad international and national consensus. The Council of Europe and the UN underline the relations of inequality and power that explain this type of violence. In Spain, it is recognized in a specific law of 2004 and the political consensus to combat it was fixed in the State Pact against Gender Violence, approved in 2017 and with many measures still to be implemented.

Besteiro denounces that the denial messages "increase the fragility of the victims". "It's one of the first things that abusers pose to victims: No one is going to believe you, where are you going to go." That idea reinforces the position of the abuser. ”

"We will give the fight, we will fight and we will silence the voice of those who lie, of those who falsify reality, of those who say that we are feminine women who fight for the lives of women and for equality," he stressed. Press conference in Madrid the president of the Federation of Associations of Separated and Divorced Women, Ana María Pérez del Campo. They call on "society and women in particular to definitely prevent further neglecting our rights, our lives and the equality we demand."