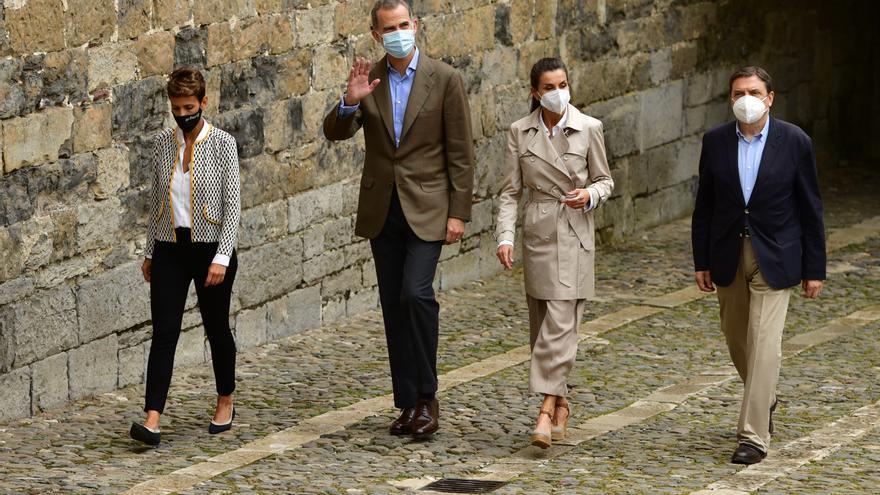 The king Philip VI has valued the Jacobean route as a symbol of union of the historical and cultural heritage of the places that mark it, and has supported institutional collaboration to promote and protect a Way that “is still alive” after centuries of pilgrimage and despite the “silence” in which until recently the pandemic.

The Kings of Spain, Don Felipe and Doña Letizia, participated this Monday in the commemoration of the Jacobean Year 2021-2022, that it has also had the presence of the President of the Government of Navarra, María Chivite; presidents and representatives of the autonomous governments of the regions through which the French Way and the Coastal Way pass; and the Minister of Agriculture, Fisheries and Food, Luis Planas, among other authorities.

Prior to the main event, which took place in the church of Santa María de Roncesvalles, Their Majesties and the authorities traveled a section of the Jacobean route, between Alto de Ibañeta and Roncesvalles. In this sense, Felipe VI has expressed that, both for him and for the Queen, it is a “immense joy to be able to share with many of those present” this small section of the Jacobean route that is “a symbol of the necessary and fruitful institutional collaboration in the protection and promotion of this very important cultural, natural and spiritual asset”.

In his speech, Felipe VI has celebrated the Jacobean Year which, exceptionally, will be biennial; a commemoration that aims, he highlighted, “to celebrate the existence of a path of encounter between people of very different origins that, in the XXI century, remains I have lived since the Middle Ages. “

Due to the pandemic, the King recalled, the Jacobean routes “have remained silent” for months and the arrival of pilgrims has also “been affected”. Thus, he considered that today will become “a day of hope thanks to the reactivation of the Camino de Santiago which, even with the prudence required by the circumstances, has been possible with the effort of the Administrations and institutions present here and associations “, has valued.

In this sense, he has expressed his appreciation to all those who help the Jacobean route “offer guarantees of care, orientation, basic services and security” and he has remarked that the pilgrims and tourists who visit the places of the Camino “will be well cared for and will enjoy unique experiences, always extraordinary and indelible”.

The King has stressed that “Every step and every kilometer of the Jacobean route is truly magical and energizing.” And he stressed that the Camino is “a true transforming element and has a special relevance for all the territories through which it passes”. In this regard, it has highlighted its “economic impact on the environment, exchanges and prosperity” as well as the “constant search for a balance that today we identify with sustainability.”

As an example of the “prosperity” of the Camino de Santiago, he has put more than 350,000 pilgrims in 2019 by Santiago de Compostela, 60% of which “came from outside our borders, from countries on five continents.”

“The Way has always united the historical and cultural heritage of the countries, regions and regions that pilgrims travel on their route to Santiago”, remarked Felipe VI, who has indicated that “to resume the Jacobean activity, with current recommendations” allows you to retrieve the function of this path from “structuring the territory”.

“It will help to overcome this crisis”

In this act of official inauguration of the Jacobean Year, the King stressed that “no doubt at this time we need to find everything that accompanies and generates the Camino de Santiago in all its routes: its deep and spiritual meaning, the recovery of social relationships, the exchange of experiences and an attitude, a behavior that is always constructive and respectful of nature. “” All of this will enrich us and help us overcome this crisis in the present and with a hopeful outlook in the future, “he emphasized.

Felipe VI stressed that pilgrimages “have contributed to developing a fundamental part of European history, culture and art”, and stressed that “intercultural dialogue between pilgrims and local populations” through which the Camino passes have been always “a symbol of brotherhood” and “a true backbone”. Likewise, it has influenced the “values ​​of the Jacobean tradition, which reinforce our society on inclusive pillars, very present on the Camino, such as solidarity and hospitality.”

Eleven years after the last Jacobean Year, the King of Spain has celebrated the more than ten centuries of history of the Camino de Santiago and has trusted that “the pilgrims’ walk will not be interrupted again” who, he has valued, are the ones who make this route “an international, universal reference.”

“Today, ladies and gentlemen, the Camino is still alive, it keeps its projection and its reason for being intact” and it is “a powerful magnet that never ceases to attract pilgrims from all over the world,” said Felipe VI. The Jacobean route “offers a deep spiritual and social experience and encourages contact with other people at a slow, more human pace,” he stressed.

For all this, he has concluded that the Way is “the one that transforms pilgrims into protagonists of history” and with them, he indicated, “many other people live together who watch over their path and are also part of this experience that is renewed. permanently for more than a thousand years “. “This is the Way that lives and that beats in us“, the King concluded, wishing” a good road to all “.