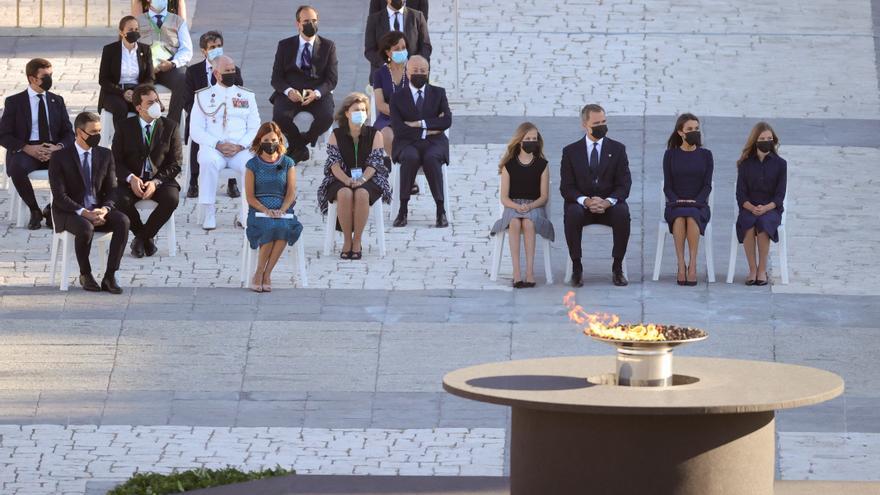 King Felipe VI has claimed this Thursday “unity” to “be able to look to the future with confidence and hope, from respect and understanding.” This is how the monarch expressed himself during the State tribute to the victims of the coronavirus that took place in the Royal Palace of Madrid. In his opinion, “the responsibility and moral strength” of the public representatives will be “the best renewed tribute” to the victims of the pandemic.

“We pay homage with all respect and the solemnity of the state to the thousands of citizens who have lost their lives,” he said, a pain that “will leave a mark on consciences” by recognizing and extolling “thousands of citizens whose behaviors have been the best example and best reason for collective hope. ” To the relatives he has said: “They are not alone in their pain. It is a pain that we share. Their grief is ours, which is present here before all Spaniards.”

“This act cannot repair the pain of many families or mitigate the sadness due to their absence, but it can do justice for their lives to their contribution to society and to their memory. This crisis has put us to the test as a country and society but has allowed us check effort and work at the service of the common good, “he added. He has also reminded health workers and other essential workers, whose “behaviors have been full of dedication to others without reservation, even putting their lives at risk.” They are an example, in his opinion, “of bravery and generosity”.

Before the king, Hernando Calleja, brother of the journalist and collaborator of elDiario.es, José María Calleja, who died of the coronavirus, has intervened. He has remembered some of the dead personalities in recent months such as Lucía Bosé, Enrique Múgica, Luis Sepúlveda, Josep María Benet, Alfonso Cortina, José Luis Capón, José María Calleja. However, he wanted to make it clear that the tribute is not “to honor the glories of anyone but to honor the naked memory of those who left brutally, those anonymous and silent dead.” “I know that when I talk about my brother I am talking about all of them,” he said during his speech. Calleja recalled that “COVID never distinguished between human beings. It has been and continues to be a cold, cruel and destructive executor.”

For all of them, he has assured that “memory is a must”. “We say goodbye to mothers, fathers, children, friends, brothers, we take their hands, we caress their cheeks, we kiss their foreheads. Rest in peace and remain in the memory of all, in the memory of Spain,” she concluded. .

About 500 people attended the event. Two thirds of them were victims and relatives of those killed by COVID-19 and essential workers such as health workers, or even ‘riders’, have also been present. In addition, the highest State institutions have been represented: the Prime Minister and the full Government, Presidents of Congress, Senate, Constitutional Court, General Council of the Judiciary, Presidents of the Autonomous Communities, Former Presidents of the Government, Head of the opposition, president of the Spanish Federation of Municipalities and Provinces, mayor of Madrid, along with parliamentary forces and a broad representation of the families of the victims and civil society.

The act had a cost of about 20,000 euros, mainly due to the displacement of relatives of the pandemic, according to government sources.