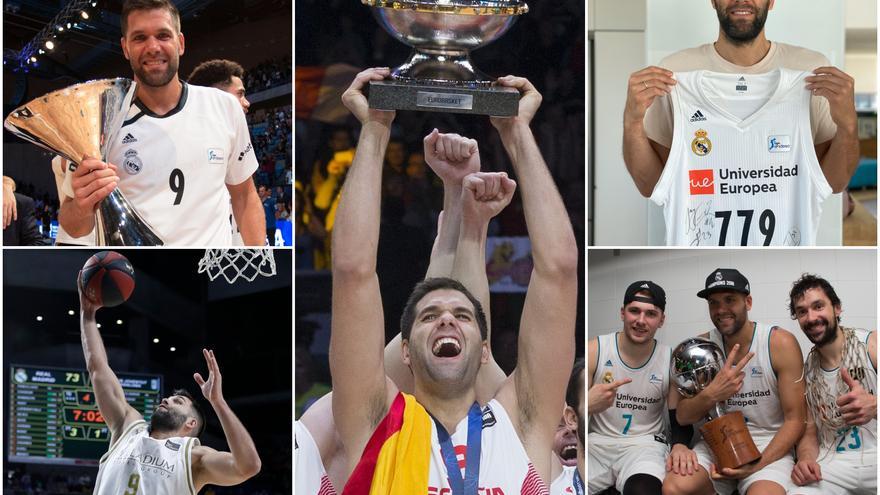 The ‘Espartaco’ of Spanish basketball retires. At 41 years old, Felipe Reyes Cabanas (Córdoba, 1980), captain of the Real Madrid and member of the best generation in the history of Spanish basketball, the ‘golden juniors’, will announce his retirement from the courts this Thursday, as confirmed by the white team.

Baptized as ‘Spartacus’ for his character and fighting for the rebound In the matches with the Spanish team by the journalist Andrés Montes, who died in 2009, a nickname that Reyes himself admitted was the one he liked the most of those received during his career, that of the Cordovan pivot is one of the success stories of the most successful generation of Spanish basketball.

A trajectory of 824 games in the ACB League and 236 in the Spanish team That did not start at the club that will fire him this Thursday, but in the capital’s neighbor: Estudiantes. Formed in the quarry of the Ramiro de Maeztu Institute, he turned professional in the ‘Estu’, with which he made his debut in the ACB League on October 4, 1998, against Baskonia in Vitoria. He scored two points and grabbed two rebounds in nine minutes in the first of his four starts that season.

The importance in the collegiate group of the then youngest of the Reyes brothers – his brother Alfonso, current president of the ABP players association, had a fruitful career in Estudiantes, Málaga, Paris, Real Madrid and Breogán de Lugo, with 140 caps and three European medals- he grew gradually, being part of the team led by his brother who was champion of the 2000 Cup and until becoming schoolboy inner game key, with which he was league runner-up in 2004.

He soon caught the attention of Real Madrid, who made the Estudiantes a first offer for Felipe Reyes in 2001, matched by the collegiate team, but which ended up getting the signing three years later. He paid 1.2 million euros to formalize the most expensive signing in its history so far and the longest contract, for five seasons with one more optional. The initial link ended up falling short and widening on several occasions.

In his first campaign in white, Reyes added the league title that Barcelona denied him as a collegiate, the beginning of a career that would be followed by a ULEB Cup and another ACB League with the Madrid team, but also several lost finals until the arrival of Pablo Laso as coach, whose virtuous cycle in the Whites coincided with the fullness of the pivot as a player.

From the hand of the Vitorian coach, Reyes has been in charge of lifting the most significant titles of the last stage of Madrid, especially the Euroleague of the year 2015, won against the Greek Olympiacos at the Palacio de los Deportes in Madrid, twenty years after the previous title European of the white team and only one after the disappointment of the final lost the previous year in Milan (Italy) against the Israeli Maccabi Tel Aviv.

Fundamental from the rebound and his ability to cause personal fouls by opposing defenders, his role has diminished in the last two seasons, in which since 2019 he has been renewing year after year, until the end of this campaign, in which he has only played eleven games in the Endesa League and five in the Euroleague.

One of the last ‘golden juniors’

If Felipe Reyes’ numbers are impressive in the ACB League, they are no less so in the Spanish team, in which he is the third player with the most international matches played in its history with 236 participations in official matches. only behind Juan Carlos Navarro (253) and Epi (239).

Member of the generation known as the ‘Juniors de Oro’, the team that won the 1999 Junior World Cup in Lisbon (Portugal) and that was the germ of the last successes of Spanish basketball with players such as Pau Gasol, Juan Carlos Navarro, Raúl López, Berni Rodríguez and Carlos Cabezas, the Cordovan center made his senior debut in a friendly against Israel prior to the 2001 Eurobasket in Turkey, in which Spain won bronze.

The 2002 World Cup in Indianapolis (USA), the silver of the Eurobasket 2003 in Sweden and the 2004 Athens Games were the steps prior to the explosion of this group in the 2006 World Cup in Japan, in which they became world champion with Reyes among their components. He was also a heavyweight in the two Olympic silver in Beijing 2008 and London 2012, after falling in the final with the United States, and was in the group that was bronze in Rio 2016.

With ten medals in his record (one world gold, three European golds, two Olympic silver and two European silver, one Olympic bronze and one European), Reyes confirmed his withdrawal from the national team after the 2017 Eurobasket, in which he had decided to rest.

Of all those triumphs with the national team, undoubtedly the most emotional was the Eurobasket 2011 in Lithuania, a tournament during which the death of Felipe Reyes’ father took place. The warmth of his companions -which They covered a trendy song that summer to cheer on ‘Felipón’– He kept Reyes in the team, which ended up lifting the European champion trophy, given by the then captain, Juan Carlos Navarro.

The path of the Cordovan center in professional basketball concluded this season and will be closed definitively this Thursday, in which Real Madrid will stage its gratitude to the one who until now has been its captain in an act led by its president Florentino Pérez, after which Reyes will address the media in a telematic press conference.