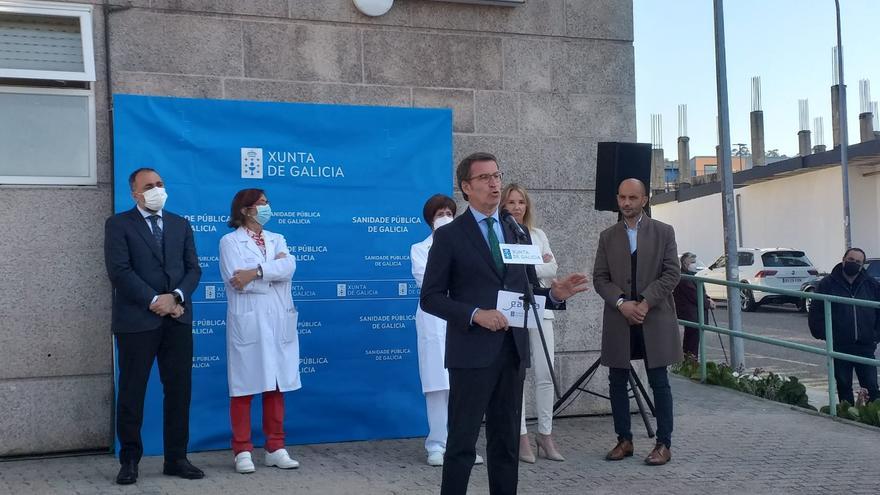 The leader of the PP, Alberto Núñez Feijóo, has expressed his "unconditional support" for Alfonso Fernández Mañueco and has justified the fact that he will not travel to Valladolid to attend his inauguration as president of Castilla y León on Tuesday for his “double” agenda as president of the party and of the Xunta de Galicia.

This has been pronounced in statements to journalists after visiting a health center in O Porriño (Pontevedra), the day before the inauguration of Mañueco, which will be attended by the general secretary of the PP, Cuca Gamarra. This Tuesday, Feijóo's agenda includes meetings with representatives of unions and employers (UGT, CCOO, Cepyme and CEOE) at the party's national headquarters.

When asked why he cannot attend that inauguration act and if he tries to send a message of distancing after the PP-Vox agreement, Feijóo explained that he has "a double commitment" because at the moment he is president of the Xunta and national president of the PP.

"And that means that I have to reconcile an institutional agenda with a party agenda and these things are obviously not easy," said Feijóo, who stressed that his "priority" at this time is to combat inflation of almost 10% that Spain is experiencing.

Remember that he did not attend the previous inauguration either

That said, the president of the PP has expressed his "unconditional support" for Mañueco, starting with a "fundamental reason: he has cleanly won the elections" in Castilla y León held on February 13.

“For me there are two types of politicians, those who win elections and those who lose them. And Mr. Mañueco has won the elections and, therefore, the unconditional support for Mr. Mañueco, whether or not he is in his inauguration, has nothing to do with it”, he emphasized.

In addition, he has alluded to the "background" because in the previous regional elections he did not attend the inauguration of Mañueco as president of Castilla y León. Then the PP reached an agreement with Cs after the PSOE won the elections in that autonomy.

Faced with criticism from the Chief Executive for the PP agreement with Vox in CyL, Feijóo has indicated that Pedro Sánchez wants to be President of the Government at all "costs" because he governs with the "populism" of Podemos and with the support of "independence". Basque and Catalan” after its agreements with ERC and Bildu.

"He is the first president of the Government of Spain in more than 40 years of democracy that governs with the Basque and Catalan independence movement," he stated, to contrast Sánchez's "methodology" of pacts with that of the PP because he is not going to "govern with independentists.

Retake the proposal to let the most voted list govern

In this sense, he stressed that he will not be "subjected to political parties that what they want is for Spain to do badly" and for the country to "fracture". As he has emphasized, that is not his "formula" but rather he defends allowing the most voted list in the elections to govern.

According to Feijóo, his proposal to let the most voted govern "endorse and protect the State" but "unfortunately President Sánchez has signed up for a formula that weakens and fragments the State."

“I am convinced that this formula will sooner or later be modified at the polls because citizens are already a little fed up with the fact that minorities and those who do not believe in Spain rule in Spain. This in no EU country has occurred or is occurring”, he concluded.