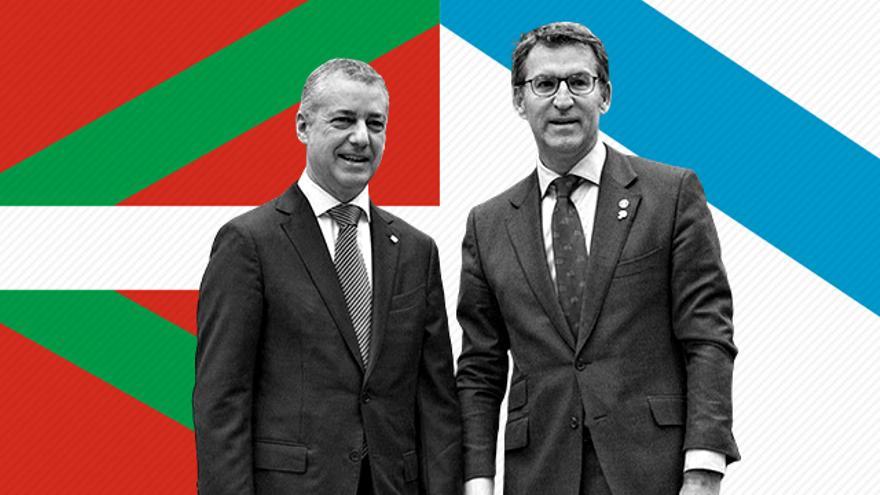 The president of the Xunta de Galicia and candidate for reelection, Alberto Núñez Feijóo, has managed this Sunday to endorse its absolute majority with the data scrutinized at 90%. This is the fourth consecutive for the PP in Galicia. In Euskadi, meanwhile, –with 94% counted– the PNV has won the elections again with a more solid support than that achieved in 2016 and that, according to the first data, is approaching the historical ceiling of his candidate for reelection, Iñigo Urkullu. Added the seats of the Basque nationalists to the slight growth of the PSE will allow the current Lehendakari to return to govern in coalition with the Socialists.

The Basque and Galician elections of 12J, however, show a collapse of United We Can, which goes from third to fourth political force in the Basque Parliament and which, with the first scrutinized data, would not be able to enter Galician. Another of the defeated of the day is the leader of the PP, Pablo Casado, whose great personal commitment, the sum of PP and Citizens in Euskadi, sinks and loses at least three of the 9 representatives that until now had the popular soloists in the Basque Parliament.

The BNG, for its part, is one of the winners of the night since it has achieved the long-awaited ‘sorpasso’ to the PSOE in Galicia, where the socialists go from second to third force. Vox will also take a positive reading, which would get him into the Basque Parliament with a seat.

The configuration of the arch of the Galician Parliament for the next four years shows a PP settled in its fourth absolute majority. The main change that the vote count is advancing at the moment is the result of the BNG, which with 19 seats would be the second force in the Galician Chamber and would overtake Gonzalo Caballero’s PSdeG. Another surprise of the night, with less than half the scrutiny, would be the absence of the Galicia en Común – Anova Mareas coalition from Parliament, which would stay out of Parliament. Until now, the majority of the PP of Alberto Núñez Feijóo would be configured with 42 seats.

In the Basque Country, with 94% counted, the PNV obtained 31 seats. This is an excellent result that brings it closer to its all-time high of 1984, when EA’s split had not yet taken place, a party now integrated into EH Bildu. They are two more seats than in 2016 and a vote percentage close to 40%, almost at the level of the Juan José Ibarretxe of 2001 when the ex-lehendakari concurred in a coalition with EA. The PNV wins in all three territories and grows in all three territories.

The EH Bildu coalition is the other great winner in Euskadi. It also experiences a strong rise and reaches 23 seats, which are five more than the current 18 in the Abertzale formation. Maddalen Iriarte improves the emergence of 2012, with Laura Mintegi, who obtained 21. Both formations add 54 out of 75 seats, above the cap of 52 Basque nationalist representatives elected in 1986.

The PSE-EE, which aspired to a rise driven by the presence of Pedro Sánchez in the central government, would keep 10 seats, not far from the 9 that in 2016 were its worst historical result. The Idoia Mendia of 2020 has not improved excessively to the Idoia Mendia of 2016. Its seats, however, are key to giving an absolute majority to the Urkullu Government if the coalition is reissued, in which it has had little role after a legislature in the one that has managed three minor portfolios -4% of the budget-.

Meanwhile, Elkarrekin Podemos-IU would stay in only 6 seats, very far from the 11 obtained by Pili Zabala in his premiere in Euskadi. Equo, cut off from the coalition and alone, would not get representation. PP + Cs would also collapse to 6 seats compared to the previous 9, which were only from the PP. Both coalitions changed leadership at the last minute: Miren Gorrotxategi and Carlos Iturgaiz appeared on the scene after a strong internal convulsion. On the other hand, Vox’s ultaderecha right will have a first institutional representative in Euskadi for Álava, Amaya Martínez Grisaleña.