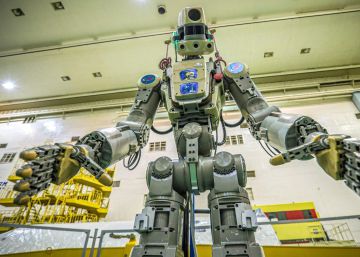 Russia has sent Fedor, its first humanoid robot, into space. The android will arrive to the International Space Station (ISS) Saturday. It will remain there for 10 days, until September 7.

"Let's go! Let's go!", The robot exclaimed in Russian at the time of takeoff, evoking the famous phrase of Yuri Gagarin during the first space trip in 1961. Fedor, which carries the Skybot F850 identification number, has split the Thursday at 06:38 hours in Moscow (05:38 Spanish time) aboard a Soyouz rocket. The humanoid was launched from the Russian Baikonur Cosmodrome in Kazakhstan.

The robot, with a silver anthropomorphic body, measures 1.80 meters and weighs 160 kilos. Fedor is a Russian name and also an acronym in English that means Final Experimental Demonstration Object Research. The rocket used in the launch is equipped with a new digital control system and latest generation engines.

On board the ISS, the robot will carry out different tasks under the supervision of Russian cosmonaut Alexander Skvortsov, who joined the International Space Station team last month.

In 2011, NASA launched a humanoid robot called Robonaut 2 with the aim of putting it to work in a high-risk environment. He returned to Earth in 2018 due to technical problems. And in 2013, Japan launched a small robot, Kirobo, into space, coinciding with the arrival of the first Japanese commander of the IEE, Koichi Wakata

Fedor will test its capabilities under conditions of very low severity. One of his main skills is to imitate human movements, so you can help astronauts do their homework. "He must carry out five or six secret tasks," explains Evgueni Dudorov, head of the company that created Fedor.

But Fedor is not the first robot that visits space. In 2011, NASA launched a humanoid robot called Robonaut 2, developed in cooperation with General Motors, with the aim of putting it to work in a high-risk environment. He returned to Earth in 2018 due to technical problems. And in 2013, Japan launched a small robot, Kirobo, into space, coinciding with the arrival of the first Japanese EEI commander, Koichi Wakata. Kirobo was able to speak, but only in Japanese.

The conquest of space It is an immense source of pride since Soviet times, but Russia has had great difficulties since the fall of the USSR. The director of the Russian Federal Space Agency, known as Roscosmos, Dmitri Rogozin, showed photos of Fedor to Russian President Vladimir Putin a few days ago and assured him that the robot is an assistant to the ISS crew. "In the future, we will have this machine to conquer space," Rogozin said.

Fedor has accounts on the social networks Instagram and Twitter, in which his daily life and his feats are narrated, such as learning to open a bottle of water.

How Vacation Rental Managers Will Prepare for 2023

This application allows you to visit pyramids from your home

The most common passwords that will not protect you