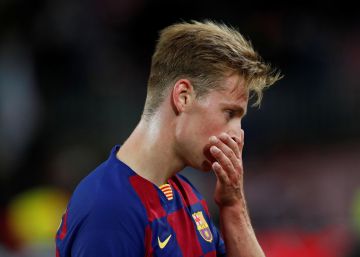 The example was given before him Prague Slavia, when Jordi Alba stayed in the dressing room during the intermission because he relapsed from his left biceps femoris injury. Moment in which Valverde took Sergi Roberto and converted Semedo as he did before Levante, among other things because Junior, left-handed and signed to take over in the lane, was in the stands. Nothing strange in this Barça, which either does not have the new ones or puts them out of place, no matter how much when the summer market closed all the owners and compliments fell on the sports area, capable of signing Griezmann and De Jong.

Some incorporations that were not so expensive because the technical secretariat also squared as it could the accounts, to the point that the economic balance between the ups and downs was at 100 million expense (255 in purchases; 156 in sales with Malcom, Cillessen, Alcácer, Denis, André Gomes and the transfer of Coutinho). A whole ordeal to LaLiga and Europe, determined as the Barca team is in winning back the Champions League – "my dream is to win it again," Messi granted this week to World soccer– once and for all. “Barça is one of the best teams in the world and is always a favorite. But I don't care if we are or not. What I want is to win the Champions League ”, he reflected From Jong from Camp Nou, after drawing with Slavia in a new encounter in which the team made water, determined to hurry to the rival area, far from grouping around the ball and without the foot or the necessary circulation to submit to a rival who assumed more risks than anyone because he planted the defensive line on the spinal cord. Another game in which the new ones stayed in the twilight and that evidenced that this Barça is neither what it was nor does it know how to reformulate itself.

Of all those who have reached the team this season, only De Jong combines the praise of the stands, even though he often plays midfielder when his body asks him to be a flyer. “It needs space to move. When he plays as a midfielder his physical display will make him go to many places and we must compensate that movement with other players ”, he agreed Valverde. But he insisted on putting him midfielder against Slavia, no matter how much he shared the line with Busquets. A disillusioned because the Dutchman received in construction but was lost in the next step, without open ends or frills that were offered because Arturo Vidal played hitch and that is already a contradiction in itself. In addition to Frenkie De Jong, he also played Griezmann. And he said that between the coach and the sports area they do not share the criteria too much. "Antoine can act in any position of the front of the attack and will be key to give relief to Suarez in some game," they explained from the technical secretariat. Valverde does not have the same idea, which he prefers to put Messi de ariete before the Frenchman, no matter how much Suárez remains in the reboot. Although while De Jong and Griezmann act out of place, the rest do not even dress short.

“I always leave a side on the bench, left-handed or right-handed, and against the Slavia was Sergi Roberto. But we have Junior, he has played matches and will continue to play, ”the coach said on his side forgotten, who has only given 234 minutes for more than Alba has missed six games of 15. A trend that is already fashionable. Case of Todibo, signed during last winter and that has remained in 77 minutes divided into two meetings, against Getafe and Sevilla. Case of Wagué, promoted to oxygenate Semedo, since it was assumed that Sergi Roberto would act in the core. Intention that lasted very little and has not allowed to see the Senegalese side. And case of Net, still to be released from azulgrana in an official duel waiting for the Cup to start.

Wenger: "They play as if they were in crisis"

Barça has also lost its way with the ball at his feet, because he does not know how to touch up his style or recover what made him great. “They are first in the league and first in their group and play as if they were in crisis. The game is too slow, there is no dynamism, in the last 30 meters it is too individual and every time they lose the ball it seems that they will fit a goal against the backlash because they cannot slow the opponent's speed, ”he said. BeIN Sports Arsène Wenger, an Arsenal technician. A criticism of the most expressive that from Barcelona do not want to hear. "For the questions, I see that there are reasons for concern, but I have heard here that we are still leaders, so we are going to worry a little, but not so much," said Valverde. "I would ask for a little patience," Piqué added; "I remember Luis Enrique's first year when things didn't work in the first months and then we ended up winning the triplet." But it is not the first year of Valverde nor the fan is patient because the team has failed to regenerate and has lost style, also its hallmarks and football in general.