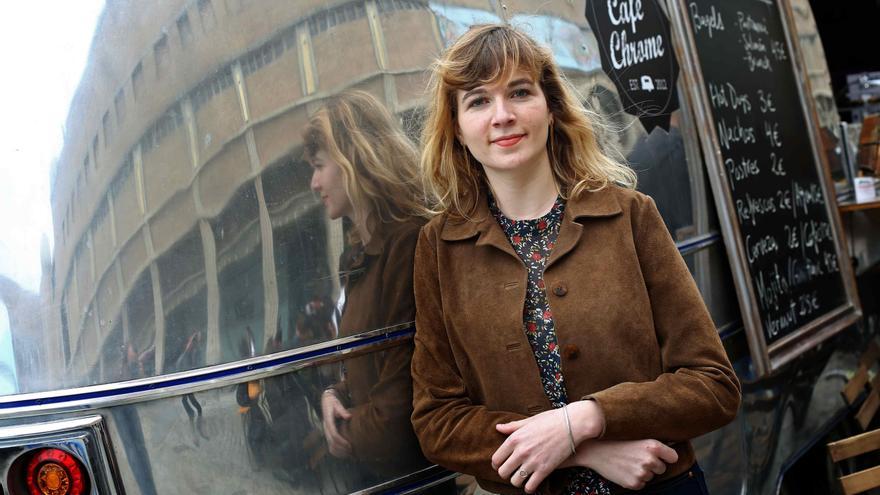 Barcelona, ​​Mar 13 (EFE) .- A giant sleeping baby hugs some tiny parents as if they were a stuffed animal on the cover of “The little ones”, the new book by Marion Fayolle, where this French woman, artist of poetic metaphors, wonders about the metamorphosis that motherhood entails, after becoming a new mother herself.

“The little ones” (Nordic) is a silent book, without text, although the words would be redundant in this work with a high load of visual symbolism, which forces us to stop at each illustration, at each of the interpretations with which Fayolle (Ardèche , 1988) transfers to paper the sensory whirlwind caused by the birth of her son, in February 2018.

Abandoning the unique biological status of being a daughter, to become a mother in turn, disrupts life, the author acknowledges to Efe, accustomed to introducing her own experiences in her books, although with the aim, always, of going beyond personal testimony , as he already did in “The tenderness of the stones”, the book he dedicated to his father’s death from cancer.

“Motherhood is necessarily accompanied by a great metamorphosis. It is difficult to express in words how my life has changed, but I do know that I felt the need to draw in order to approach my new role from a certain distance, question myself about it and question my feelings and emotions “, reveals.

For example, the surprise of the effort made to detach from the baby, after two years of breastfeeding, to resume her travels for work reasons, or the emptiness that childbirth can cause and that Fayolle draws as a woman with a large hole in your abdomen.

Did she feel like this? He answers: “for several months I felt the baby inside me, I noticed how it moved, I perceived when I had hiccups. Childbirth is an unforgettable moment, but you have to learn to have an empty belly again. I did not experience it as suffering, but as something amazing. Then the breasts are filled and emptied, that is to say, there also arises a question of full and emptiness, of fusion and of separation “.

Because breastfeeding, the bond between the breast as a connection between mother and child, is another recurring element in the work, but not as a representation of animality, but as a gesture of love.

“An immense power that has been given to us women. During that stage I felt fully fulfilled when I saw that I could fill my son with milk and love, make him grow, calm him without having to buy anything, simply sharing with him something that my body created “, he describes.

The yearning for protection overflows the pages of “The little ones”, that fear that something might happen to the newborn, and Fayolle expresses it in her simple and direct drawings: a mother turned into a glass bell, a life preserver, a cave, or in a “nest chest”.

In the pages of “The little ones”, mothers also seem -literally- to want to design, photocopy, cut out, sculpt their children, a desire, deep down, to project and control their future, a complicated task if you don’t want to tamp down the material that comes from the factory.

“Educating a child is a very complex task, because we always wonder how to accompany without spoiling. Because a child has a freedom, an intuition, an open and innocent attitude that is losing with development. Thus, it is not easy to help growing up a child trying to preserve, at the same time, all that raw material that is inside “, argues the author.

And furthermore, he adds, it is a two-way road, because “it would be a shame to believe that only parents teach their children; on the contrary, children teach us many things. Living with a child is exhausting, but it is living with poetry, to contemplate everyday life with a new look, to rediscover the pleasure of the game, to learn to feel the world again “.

And, of course, the non-trivial issue of how this newcomer affects the adult relationship cannot be missed: “Going from two to three is not easy! The relationship changes and you have to find a new balance, rebuild the bond in a different way, but it is not about something negative, but about an imbalance. Life is much richer and more interesting when there are imbalances, “the cartoonist contends.

Any feelings about motherhood that you have left in the pipeline out of modesty or fear of reprisals in the face of a certain maternal fundamentalism? Apparently not.

“I could have drawn different things. I don’t usually censor myself, but there came a time when I stopped because I thought I had already finished that book. However, now I know that it will have a continuation, perhaps as a second part, perhaps in other books. Before, as I had no children, in my works there were no children, now, being a mother, I’m sure there will be a baby next time “, Fayolle tells her readers.