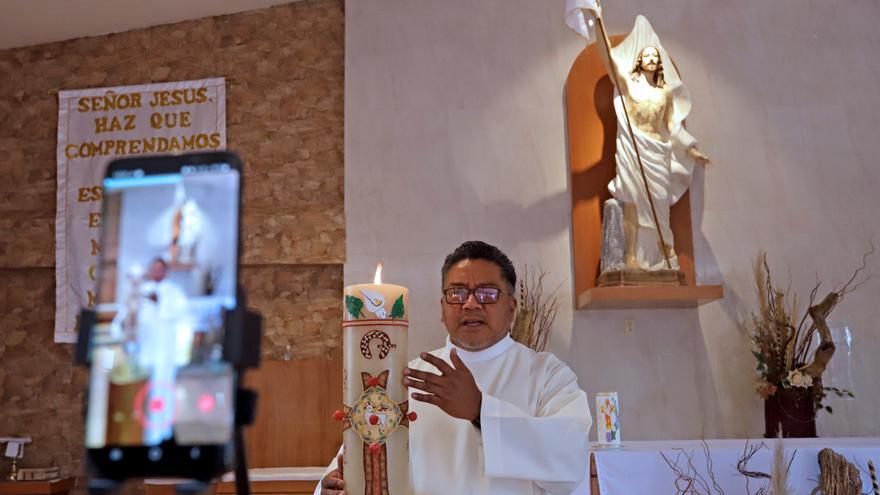 In the Mexican city of Puebla, Father Cheke emerged, a priest who evangelizes and maintains closeness with Catholics and non-Catholics through social networks.

The favorite platform of Ezequiel Padilla, rector of the Chapel of the Sacred Heart and San Cayetano, is TikTok, where today it accumulates 675,000 followers and 3.1 million “likes”.

And it is not very common to see a religious dance with a cassock or make funny videos -and sometimes highly criticized as well- where his followers have known the word of God, the meaning of Holy Week or prayer.

THE PANDEMIC, THE DETONATING

“My curiosity about this social network began in March a year ago because I returned to Mexico from a training meeting that I took in Italy, when the covid-19 pandemic began,” the religious explained this Sunday to Efe.

He pointed out that in Italy the situation was “very serious” and when he was able to return to his homeland he realized that “there was no health protocol”, referring to the fact that quarantine was never mandatory in Mexico.

But he, because of “responsibility” and at 48 years old, decided to lock himself up at home. “Being at home I couldn’t find many activities,” he recalled, and began to watch TikTok videos.

Finally, they were encouraged to download the application and experiment with the platform.

Father Cheke shared that he remembers that his first video was a blessing on the altar of the chapel where he is rector and wore his cassock.

He uploaded it to the digital platform without knowing that it was the beginning of something special. “From having 20 followers multiplied I got to have 10,000 in a few hours,” he stressed.

Today, the father dances, sings, and interprets with a self-confidence that many “influencers” would like.

With the sole purpose, he said, of drawing smiles on people’s faces in these times of uncertainty due to covid-19, which adds more than 2.3 million infections in Mexico and about 215,000 deaths, being the third nation in the world. world with the most deaths from coronavirus after the United States and Brazil.

In one of his most recent videos, the priest turns around on himself and then, dubbing a dialogue taken from another scene, he says:

“My mother says that for all those who once closed their doors for me, they forgot that while they closed a door for me, God opened the entire universe for me,” she says while extending her hands to the sky.

For the religious, his greatest “desire” is to show a “young Christ and a living Christ.”

Ezequiel emphasized that religion is not at odds with daily life, so he shared that he is very strict in his role as a vocational religious, but he is also cheerful because he has always liked being close to people and looking for ways to do it.

Without seeking fame, he only wants to bring the young and not so young to God in a healthy, joyful way, and without obligations or ties, he stressed.

For this reason, he shared that a few days ago he visited a church in his native Tlaxco, Guerrero municipality, and a young man who saw him at the door told him “Father Cheke, I follow you on TikTok.”

And his reaction was of surprise, due to the great impact that social networks have. He has become such a viral character that he now has his own tag on networks, #ChekeTokers, which has become a trend.

With 97.8 million believers, Mexico is the second country in the world with the most Catholics, after Brazil.