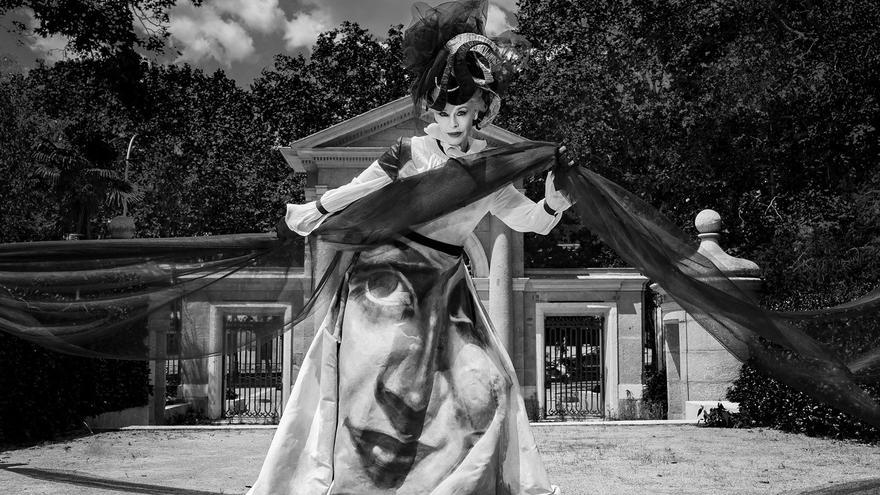 Madrid, Feb 12 (EFE) – Under the name “N5”, photographer Omar Ayyashi presents his new exhibition at the Royal Botanical Garden, a project that “works for gender equality” in which he collaborates with the designer Manuel Fernández. whose inauguration was attended by the vice president of the Community of Madrid, Ignacio Aguado, as well as Cayetana Guillén Cuervo, Juana Acosta and Paz Vega.

“Culture has to be a matter of State”, said during the presentation of the sample Ignacio Aguado, vice president of the Community of Madrid, who stressed the importance of this sector “not only at an economic level but at a mental level”, stressing that “culture has been a lifeline for millions of people in this pandemic,” he said, alluding to this new solidarity project, which unites photography, fashion and gender equality.

The Villanueva Pavilion of the Real Jardín Botánico de Madrid of the Higher Council for Scientific Research of Madrid (RJB-CSIC), has hosted this morning the presentation of the exhibition, which will be available until March 14 and is part of the Madrid Design framework Festival 2021.

The actresses Paz Vega, Belén Rueda, Juana Acosta, Mina El Hammani, Anna Castillo or Cayetana Guillén Cuervo as well as Ester Expósito, Rossy de Palma, Jedet, Elena Furiase and Bárbara Lennie have been involved in the project, of which they are protagonists through of sixteen photographs taken by Omar Ayyashi, showing designs by Manuel Fernández, made exclusively for the “Fashion Art Institute”.

The solidarity project is based on the fifth Sustainable Development Goal set by the United Nations in its Agenda for 2030; gender equality, and its benefits will go to different NGOs that collaborate with this cause.

The Madrid vice president, who has defined the exhibition as an example of “what culture should be in the Community of Madrid”, stressed that achieving gender equality “is a common goal for all”, in which still “There is much to move forward.”

The photographer Omar Ayyashi has agreed with this message, who despite emphasizing that carrying out the work has been “complicated” due to the restrictions, has expressed “excited” by the reception of the project, in which he assures that it has been pursued ” a common goal ”by serving as an artistic platform to fight for gender equality.

“Each image is a dream world that we have created out of nothing, we have been at 40 degrees and also below zero, and we have fought hard to create something that was special,” he explained about the development of the Ayyashi project, who has already organized several solidarity exhibitions, such as “#ReciclaFuturo”, which earned him the award for “Best Social Communication” in 2018.

Artists such as Luis Gordillo, Jesús Zurita, Grimanesa Amorós, Olga Sinclair, or Okuda San Miguel, who was present at the inauguration, have participated in the “canvas-suits” worn by the actresses in the portraits, whose designs belong to Manuel Fernández .

“This is the first time that my dresses have gone out of their normal situation, which is to be suits on mannequins, to dress actresses in this project,” reflected Manuel Fernández, whose career merging fashion and art began 23 years ago, with the creation of the “Fashion Art” platform, to join this project this time.

“We had to join this initiative because it is a very clear project of gender equality, and from the Academy of Performing Arts we vindicate this equality,” said its president Jesús Cimarro, with whom Esteban Manrique, director of the Royal Botanical Garden of Madrid, ensuring that “it is a project in which we must all get involved”.

In addition, the Minister of Social Policies, Families, Equality and Natality of the CAM Javier Luengo, the regional secretary of the Spanish Red Cross Francisco G. Sánchez, the general director of Equality of the CAM Cristina López-Cobo have also been present supporting the initiative and the director of Madrid Design Festival, Álvaro Matías.