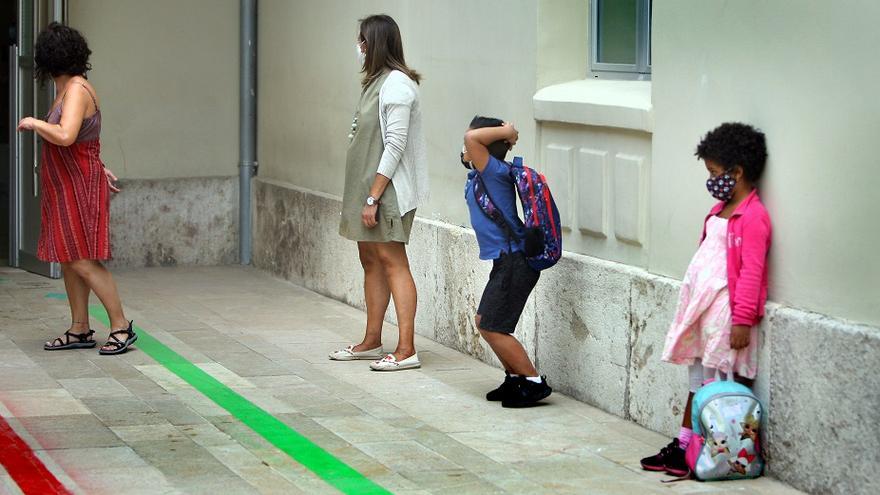 Some urban families have found something new that they did not have at the beginning of the year. Their autonomous communities have given permission to schools – at their own choice – to create what are called “mixed groups” (multi-grade classrooms, in a somewhat more technical term), classes in which children of different ages mix. It has not liked much, they explain from the FAPA Giner de los Ríos, to the point that in some centers, for example, in the Loranca de Fuenlabrada, in Madrid, these groups have been disbanded due to family complaints. The fingers of the hand have become scarce to count the requests that accumulate thousands of signatures at this beginning of the year so that these groups disappear and become standard unfolds.

The problem, some center managers explain, is that it is not as simple as wanting to do it. The first evidence is that teachers are needed: at least one for each new group that is created. The next essential requirement is the physical space. The first aspect is complicated, although the administrations are putting the batteries at the last minute with the hiring; the second is a physical impossibility.

Madrid was one of the first regions to allow this measure, but not the only one. At least in Aragon, Asturias, Catalonia, the Valencian Community, Castilla-La Mancha, the Balearic Islands, Asturias, the Canary Islands and Andalusia, the centers have also been given permission to do so if they deem it necessary, according to CCOO sources. In some it was already allowed in an ordinary way. In their instructions, the communities have asked the schools to maintain a certain order in the regrouping: those of the second cycle of Infant (3-6 years) can be mixed with each other; in Primary it is limited to cycles within the stage. Those of 1º with those of 2º, 3º with 4º and 5º with 6º.

“I knew since June that we were going to have to do them,” explains Daniel Flórez, director of a school in San Fernando, Madrid. “We have no choice because I have no space to put more groups.” In its center there are nine levels (three for Infant and six for Primary) with two lines per level. To reduce the ratios to 20 students per classroom – as agreed by the Ministry of Education and the autonomous communities in their last meeting, at the end of August – and not to mix ages, it would need nine more spaces as classrooms (one for each level), which in its center does not exist. In fact, explains Flórez, they have created five extra groups compared to last year and four of them have had to move them to municipal spaces more or less close to the school. “In my case, it would not have mattered the teachers who were in charge,” he explains.

The families protest this situation on a double plane. On the one hand, they believe that educationally it is a step backwards for their children. “The creation of mixed groups is detrimental to the quality of public education”; “The right of children to follow an education similar to that of the rest of their peers is violated”; “It is a patch that does not meet the needs of our children,” the arguments are repeated. “We are collecting many concerns from families,” confirms Carmen Morillas, president of the Federation of Associations of Fathers and Mothers Giner de los Ríos in Madrid. “From the uncertainty and the lack of information we have gone to anger.” Dolores Álvarez, director of the Asturias school in Gijón, has also received these complaints. “When they come, I explain to them that it is usually done in rural schools,” he says.

On the other hand, the parents regret that everything was done with so much improvisation, at the last minute. “We are finding this situation in schools, warned at the last minute and with no room for maneuver to demand a reasonable solution,” they tell from the AMPA of the Antonio Machado de Colmenar Viejo school in Madrid. This complaint is shared by teachers, extendable to the rest of the situations that they are encountering. After spending the summer preparing the school for a protocol, the sectoral conference at the end of August changed the rules of the game: everything they had done in the centers was almost in vain.

This proposal has surprised some families. However, it is a reality that works successfully in rural schools. In the Agrupados Rural Centers (CRA), mixed groups have always been a – forced – reality, one might say. If you have 15 students of 7 different levels, you cannot create seven classes of two people. There, a virtue is made of necessity, explain the teachers who have passed through one of these classrooms. Catalunya, Aragon and Andalusia, due to their geographic and demographic characteristics, are some of the regions where there is more rural school.

“Before this was normal,” says Elena Martín, professor of Educational Psychology of Education at the Autonomous University of Madrid, “but as society was stratified, we went to the simple, which is to group by age. But that rigidity does not have Justification, unifying people by age is artificial in society, “he argues.

Among education professionals there are opinions for all tastes regarding the convenience or not of forming these groups. Martín assures that it is a positive measure and explains that “what the theories of human development reveal is that having a person who has a little more development than you is the key to development”, and explains the concept of “proximal development” : “A person who knows something more than you contributes what you lack, but without stepping on yours; you do your part”.

Stuck on the classroom ground, Flórez disagrees. “It is not desirable and I do not see any sense in it. The maturational and developmental difference is very large in the smallest stages,” he says. And he adds another element that is not strictly educational: “The most worrying thing, what has cost us the most, has been to break up the group, separate some”.

In a perhaps intermediate position is Dolores Álvarez, director of the Asturias de Gijón school. There they have created two mixed groups (one in Infant, 4 and 5 years old, others in Primary for 5º and 6º), which has not enchanted the families, according to the local press. Álvarez understands parents’ reluctance, he explains on the other side of the phone: “They have reluctance because they believe that some will not arrive or others will fall short,” he explains. But it does not coincide: “I understand that it is a solution that is being adopted out of necessity and that it is being done in many places. I speak to parents with doubts about the rural school, where it is a common practice, and they all benefit from everything by the mixture of ages. I do not see it harmful, the little ones are like sponges. Having a 4-year-old and a 5-year-old mixed together I think it benefits the 4-year-old, but does not harm the 5 “. And she closes: “I wouldn’t choose it, I like age groups, but it doesn’t seem negative to me.”

The problem of choosing students who were to leave their home group is not confined to multigrade groups, but it occurs in them with greater force, some teachers explain, because to the confusion over having been removed from their classes, students add seeing others smaller or older. Flórez says that in his case, as he already saw it coming, he prepared the ground. “We have made these new groups with pedagogical and emotional criteria. We have formed heterogeneous groups, which were the least troublesome possible (consolidated students, without special educational needs, for example) and taking care of the emotional aspect, moving together best friends or siblings, “he explains. It has worked.” 90% have welcomed it well, although I think it also influences that we come from years of previous work, families know that this is a participatory and democratic school, “he says.

Multigrade classrooms are not just a novelty for students. For some teachers, the majority, it will be their first experience and it can be a problem, although they also tend to understand the situation. “They have all assumed it,” confirms Álvarez, the director of CEIP Asturias. “Just as we have been doing solidarity work since day 1, which would not correspond to us, before our pedagogical work. It is our turn”. In general, except for some experiences in universities associated with the rural world, such as the University of Zaragoza, where specific programs have been developed, it is not usual for Faculties of Teacher Training to teach to work in a multigrade classroom.

The advantage they have is that they will not land in a reality like that of the rural school, which mixes ages in class without restriction. Here there will be no more difference than one year in Primary and two in Secondary. “It is true that it is more difficult to teach like this, it requires a time to adapt the first time,” explains a teacher from a CRA. “When you explain something to some you have to have activities for others, you need to have a very organized agenda,” he gives as an example.

Perhaps for this reason, Flórez has chosen the teachers with the most experience at the center, with whom the students are most familiar, for these groups. You think it will make them feel more comfortable. There will also be a backup teacher in their classrooms, a role to which he has lent himself. It’s working, count. “The kids are survivors. They just wanted to go back to school, we see them happy. We have put them [a los que han tenido que cambiar de grupo] the psychomotrocity teacher, who they like a lot. They come to the teacher Irene and they are happy, “he closes.

fire consumes thousands of hectares in different parts of Spain