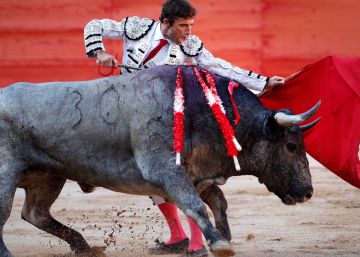 From the outset, the name of José Escolar imposes respect; later, the bulls leave and it is understood that there is reason for it. Of beautiful picture, crimson coat, open of pythons, excels in all of them his fixed and penetrating gaze, of those that you do not know if the animal is surprised before the suit of lights, scans the bullfighter or studies the way to throw it through the air. Serious all of them, ready, pending the flight of a fly, dangerous when they express difficulty, and dull in their nobility.

Of all the bullfighters, the only one that really triumphed was the Portuguese banderillero Joao Ferreira, under the command of Javier Castaño, who nailed outstanding pairs in the two bulls, -asomándose the balcony of very astifino horns, for which he had to greet between the cheers of the lines. It's not demerit for the killers, but that's how it happened.

Fernando Robleño had to rely on his seniority to resolve his commitment. The first bull had the face of a man with all the beard, so circumspect him that the rocks kept a spectacular silence during the fight to see what happened; because his behavior – that of the bull – was harsh, difficult and dangerous in excess. A bull, in short, to make his leader suffer; in this case a skilled right-hander, with plenty of trade and enough knowledge to emerge unscathed from such a compromised set. Robleño analyzed it, verified the short trip of the bull, its meager delivery, its growing orientation and its roughness, and did well to passport it quickly before finishing it in the infirmary. Grandón was the fourth, but without fixity, without delivery, with much reluctance.

One ear cut Javier Castaño, wounded in this square last year by a bull of this same iron and that, since then, suffers in his flesh the oblivion of the companies. Serious, also, the second of the afternoon, before which Castaño showed that the departure from the squares takes its toll. He rammed and repeated the animal with nobility on the crutch, although with poor quality, but the torero muleteó without grace and vulgarity. But he killed with a lunge of fulminating effects and they granted him an inexplicable and affectionate ear. Very dangerous the fifth, so much that the bullfighter was saved by miracle.

Pepe Moral, for his part, made it clear, again, that he is a bullfighter with an extraordinary background, but that he does not go through the best moment. Precious was the remove by tight chicuelinas in the first bull of Castaño, and category three verónicas and the average with which he received the third. It was expected, therefore, a work of crutch to the height of his high concept and before a bull that rammed with nobility. It could not be. There was a long chest pass, a detail with the right hand, but little, very little, for what the bull deserved. A Moral lacked commitment and decision to uncover his jar, which contains essence. But if it kills the first one, safely walk a trophy. The same could happen to the sixth, noble and bland, who stole a batch of very tempered right hands. That is, he could cut two ears and leave on the shoulders-it would not have been fair-and did not walk any and walked out.