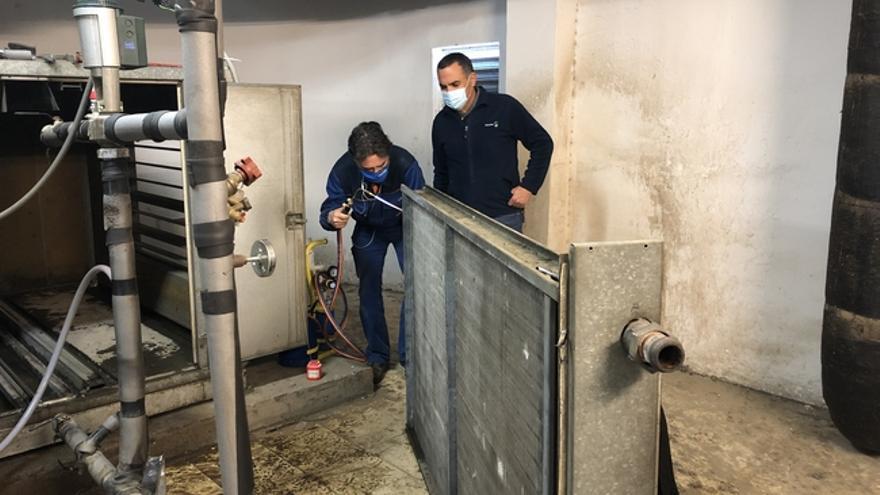 The Maintenance staff of the Toledo University Hospital Complex, dependent on the Castilla-La Mancha Health Service, has been working “without rest” since last Monday to solve the problems that are occurring in the air conditioning system of the Virgen de Hospital. Health of the city. Various breakdowns have been registered in the hot water circuits that air condition the hospital, and which especially affect the northern area of ​​the Hospital.

As explained by the Minister of Finance and Public Administrations, Juan Alfonso Ruiz Molina, “the electricity supply has not failed, the heating has failed due to low temperatures and only in the northern area of ​​the hospital and at this time an attempt is being made to solve the fault “.

The different areas of the hospital centers are heated by exchanging hot water with the outside air in batteries, which is heated and distributed to the different areas of the hospital for air conditioning. Low temperatures, minus 15 degrees, cause the water circulating through the batteries to freeze, causing them to break and spilling the water through the lower floors.

From the Maintenance area they point out that their repair is “complex and slow” given that the large batteries are made up of dozens of copper tubes that have to be welded where the break has occurred. The center’s staff, together with external technical personnel, work “without rest” to recover the circuits, predictably during this Thursday.

While the repair is taking place, the management of the Toledo Hospital Complex has distributed portable heaters in those areas of the health center that are being most affected and has a remnant of these devices in case their installation in more areas is necessary.

In addition, in order to guarantee the electricity supply throughout the hospital complex, due to the increase in consumption derived from the connection to the network of all these portable devices, an external generator set has been installed to prevent any type of overload in the network .

The Toledo Hospital Complex Management has issued a statement in which “it wants to thank both professionals and patients for understanding this situation given the discomfort caused by the cold and snowy storm that the central area of ​​the country suffers these days. I would like to extend my gratitude to all the cleaning staff who work quickly to recover the affected rooms “.

The breakdown adds to the problems of these days in the building derived from the accumulation of snow and that It has produced authentic waterfalls in the center.

We can ask Page to “debug responsibilities”

Podemos Castilla-La Mancha has formally requested Emiliano García-Page to carry out “an urgent investigation and clarify the necessary political and administrative responsibilities” necessary to the Ministry of Health of Castilla-La Mancha and to SESCAM after a new failure in the facilities of the Hospital Virgen de la Salud de Toledo that disables the heating of the building.

The notice of the breakdown, which appeared on social media after the complaint from the hospital staff, indicated that the heating system of the Virgen de la Salud Hospital in Toledo suffered a “definitive” breakdown while people were being asked to go to the hospital to wear “warm clothes”.

They demand an immediate solution to “the catastrophic management of the Virgen de la Salud Hospital in the midst of a health emergency due to the COVID-19 pandemic,” and indicate that “the precarious state of conservation that has been allowed in the hospital has given rise to problems of leaks and, ultimately, the failure of the heating system ”, which they have described as“ objectively dangerous for the health of personnel and patients, as well as deeply embarrassing for our public health system ”.

“It is not an earthquake, we are talking about a cold wave that was expected for weeks in the middle of the pandemic and there has been no minimum contingency plan to respond to a hospital that until it is closed must comply with all the guarantees quality of the public health service ”, they have argued.

As they have denounced from the purple formation, the failure of the heating system of what is “the main hospital at the moment in the Castilian-Manchegan capital” has been “the straw that broke the camel’s back”, which comes after “a management of the pandemic chaotic, a significant delay in the vaccination campaign in which Castilla-La Mancha is the seventh autonomous community in the queue and a shameful inauguration of the new hospital when it was not even ready to fulfill its function ”.

They also point out that the “laziness” on the part of the autonomous government and its “abuse” of health personnel is causing situations that “are leaving them on the brink of saturation after two previous waves of infections that have been exhausting in themselves”, something that also has returned to denounce today UGT Castilla-La Mancha.