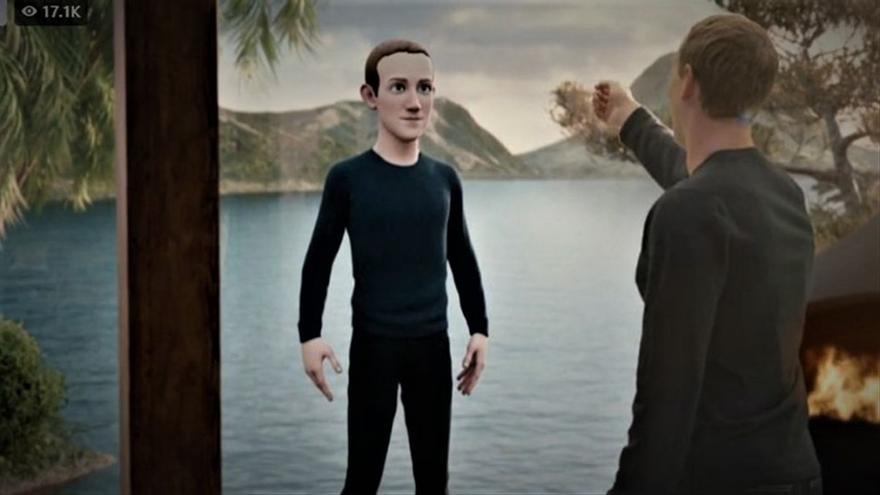 Every time you do a search, use the GPS, gossip photos of your friends or write a publication (even if you delete it later) you are generating a series of data that are stored in the profile that giants like Google or Facebook they have of you to know in detail your interests and concerns. Access to that information is what leads third parties, from shoe stores to political parties, to pay large sums of money to these platforms to send you personalized advertising. A gold mine that, with the construction of the so-called metaverseraises great fears about how it can violate privacy.

The metaverse is, at the moment, a buzzword in which the technology industry lays down his projections of what he wants the future of the Internet to be: a virtual reality immersive in which to connect to live a second parallel life. Since Facebook announced in October that it was betting on it, investment in these environments has skyrocketed, giving rise to a race between large companies – such as microsoft, Manzana or Google— who want to get to this promised land before anyone else to squeeze their flourishing digital economy.

the giants of Silicon Valley They see in this idea of ​​the metaverse an opportunity to amass more personal data, the main raw material of their business. Up to 85% of Facebook's profits in 2020 (about 84.2 billion euros) came from the personalized advertising. In your virtual world, still in the first phase of its construction, advertising and trading of digital goods will also be the key to your business.

Can you imagine a world where physical, virtual and augmented reality intermingle? This dystopia is Silicon Valley's new wet dream. pic.twitter.com/Mw7HMiYG7V

If the current digital environment is already nourished by the data you leave with your activity on the internet, in virtual reality that could be even more invasive. And it is that Meta is patenting technologies that would serve to track facial and body expressions of users such as the movement of their pupils or the gestures of their nose, according to revealed the 'Financial Times'. "This data collection lays the groundwork for an unprecedented invasion of our lives, homes and thoughts," has denounced Electronic Frontier Foundation, the leading organization defending civil liberties in the digital world.

That Meta is applying for patents for those systems of face id It does not mean that they end up adapting, but they do make their initial intentions clear. Those technologies are sold as necessary to improve the user experience. If he smiles, the cameras and sensors installed in his virtual reality headset will be able to detect it and translate it into his avatar. If you look at a specific point, the sensors will allow you to focus on it with more light and clarity.

Among the other patents pointed out by the 'Financial Times' there is a system of magnetic sensors that would be placed on the user's torso to transfer their movements in the digital environment, an 'engine' that creates 3D avatars of users through photographs theirs and a technology to expose the ads in Augmented Reality, as holograms that are superimposed on the physical world.

Beyond their potential practical utility, these technologies can bring significant risks for the user privacy. In addition to everything you say or do, your facial or body gestures will also be exploited for an economic purpose. Detecting the movement of our pupils can reveal what interests, excites or worries us the most, information that will be sold to thirsty advertisers to reach the public. Cameras built into virtual reality goggles could also detect if the TV in your home is old and prompt an interested company to announce a new one.

Our exposure can go beyond advertisers. "These devices could allow governments, companies and security forces illegitimate access to our lives (...) and create new avenues for online harassment and abuse," says the EFF report. That they make the virtual experience more comfortable and immersive does not mean that it is safer.

Although European law limits the collection of biometric data, the regulation of virtual environments is still a major challenge. And, until it arrives, the massive extraction of data exposes more than ever the Privacy of users, threatening to undermine their autonomy. “Tracking the movement of your eyes or the way you walk can infer a lot of information about you, including your thoughts. What happens to privacy when not even these are protected? ”, warned Kavya Pearlman, founder of the non-profit for technological ethics XRSI, in Venture Beat.

Facebook is leading the promotion of the metaverse because it wants to profit from it. His intention to capitalize on this new strategic market and dominate it as he has done with the social networks adds another concern about the impact of virtual reality on the privacy of users. And it is that the giant of mark zuckerberg announced its commitment – ​​changing the name of the company to Meta – in the midst of the crisis due to the revelations of the engineer Frances Hagen, which uncovered how the platform accentuates the mental problems of adolescents or makes the most incendiary speeches go viral, among other scandals. Many saw his decision as a diversionary maneuver to re-set the agenda.

That Facebook's first ad for Horizon tried SO hard to make it seem like The Good Place is indisputable proof that it's The Bad Place pic.twitter.com/SSd9EJFrbC

It is also worrying that the company that most advocates the benefits of the metaverse missed the fact that the firm Cambridge Analytics illegally collect the data of 87 million of its users to torpedo propaganda favorable to the presidential campaign of donald trump. Thus, up to 87% of Americans are concerned that Facebook could create this virtual space, according to a study from the cybersecurity company NordVPN.

Although the metaverse that is being sold is still a marketing nebula, the possibility that Meta takes over this emerging sector is real. Do it or not, virtual reality aims to be a new era of internet commerce in which the privacy problems that the industry has been dragging for 20 years will be amplified.