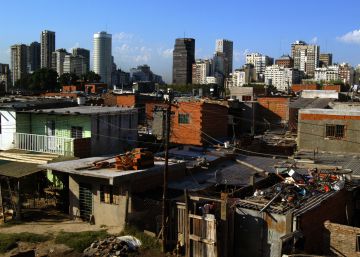 Turns changed in 2015. After a sharp decline in poverty in Latin America and the Caribbean in the first part of the current decade, the advance went backwards. Far from being interrupted, this dynamic continues: the extreme shortage will rebound again this year and will now add a five-year period by linking backward movements in one of the key indicators to understand the reduction in the well-being of the layers with less resources of the Latin American population, for which Social mobility is very limited. The region will close 2019 with a rise of seven tenths in the general poverty index - which goes from affecting 30.1% of the population to 30.8%, according to figures published Thursday by ECLAC, the United Nations arm for development in the subcontinent - and eight tenths in its extreme variable - the most pressing, rising from 10.7% to 11.5% -.

"It is very worrying and ignites strong warning signs, especially in a regional context marked by low growth, climatic emergency, increase and greater complexity of migration, and profound transformations in demography and the labor market," they underline from the agency based in Santiago, Chile. Statistics, which sees the light in full wave of protests in several Latin American countries - among them, Chile itself - to demand social measures and a frontal fight against inequality, translates into even more shocking figures when moving to the field of absolute numbers: six million people will swell the ranks of extreme poverty This year, a group that will grow to 72 million. General poverty increases by the same amount: 191 million, compared to 185 last year. The severity of the data increases if the calculation period is increased: if the estimates are met, the region will close 2019 with 27 million poor people more than in 2014. Almost all of them - 26 million -, in a situation of extreme shortage.

The changing trend in the evolution of poverty and extreme poverty has been blamed, from many areas and almost exclusively, at the end of the boom of commodities, at the dawn of the decade that now ends. A only partial truth, as stressed by the technicians of the agency based in Santiago, Chile, which introduce a complementary narrative. “The end of the boom in exports of raw materials and the consequent [economic] deceleration changed the trend as of 2015. [But] the process was exacerbated by the decrease in fiscal space and the adjustment policies that affected coverage and the continuity of the policies to combat poverty and social and labor inclusion ”, slide in its last Social Panorama of Latin America. The “important” advances of the beginning of the decade took place, in addition to a more favorable economic context, in a political environment “in which the eradication of poverty, the reduction of inequality, the inclusion and the extension of protection social won an unpublished space in the public agenda ”of the region.

The still image fluctuates markedly between countries. An important part of the rebound in extreme poverty in the last five years is attributable to two: Brazil, by far the largest in the region, with a population already riding above 210 million people; and Venezuela, a nation plunged into a deep political and economic crisis that - according to the figures of Nicolás Maduro's own regime - He has eaten at least half of his GDP. The trend in the rest of the subcontinent was towards a very slight cut in the percentage of population with insufficient income to cover basic needs, "although [the reduction] was at a slower pace than between 2008 and 2014".

Inequality down, but without active fiscal policies

In a dynamic somewhat better than that drawn by poverty indices, Gini's - the most common for measuring inequality in the world - has continued a clearly bearish line, although at a noticeably lower rate than in the first tranche of the present decade: if between 2002 and 2014 the gap between the lower income and higher income strata narrowed at an annual rate of 1%, since 2014 it has done so at a rate of 0.6%. In the end, inequality continues to spread freely in Latin America, by far the most unequal region of the globe and in which the development of the welfare state is not, by far, among the main priorities of most governments.

ECLAC recovers one of its classic slogans - "grow to match and match to grow" - to remember, in the words of its executive secretary, Alice Barcena, that "overcoming poverty does not only require economic growth: it must be accompanied by redistributive policies and active fiscal policies". The greatest improvements in inequality - measured by the Gini index - occur in Bolivia, El Salvador and Paraguay and, to a lesser extent, in Colombia. On the opposite side, Brazil sees how the dispersion of income increases remarkably, with the worst income distribution among the richest 1% - which obtains almost a third of the wealth generated in a year - and the remaining 99%.

More middle class, but with a pyramidal and vulnerable structure

The best news of the report, one of the worst news brings from how many publishes ECLAC, is the progressive strengthening of the middle income strata: if in 2002 less than 27% of Latin Americans were framed in that group and six years later they were just over 36%, in 2017 - the last year for which data is available - this figure had grown to 41%. In parallel, in those 15 years, the lowest strata of the scale went from assuming 71% to lowering of 56% and the high ones - with incomes over 10 poverty lines - increased from 2.2% to 3% .

"Accessing the middle class," the agency warns, does not "automatically" entail exceeding the monetary poverty limit of each of the countries in the region. "It is essential to recognize that there is a segment of the population in the region that, despite having exceeded this threshold, is in a situation of high vulnerability and risk of returning to this situation." Above all, it closes, if it falls into unemployment, a threat that grows in gloomy economic times like those experienced by Latin America and the Caribbean today.

Protect against inflation with measures that feed it

Spanish technology for the industrial development of green hydrogen