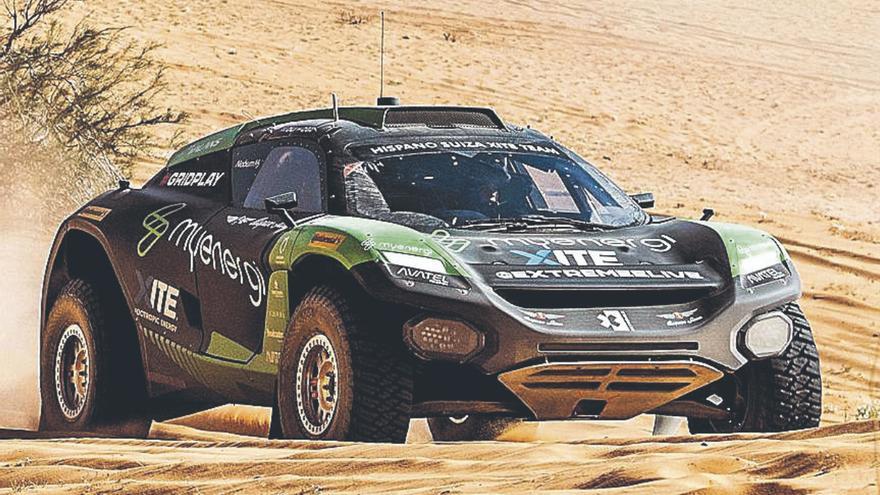 Taking into account that a third of the CO2 emissions that are generated in the world come from transport with fossil fuels that are committed to the activity, Extreme-E has been created with the aim of demonstrating the importance of electric vehicles to reduce the impact of pollution on the planet. And it is that the organization itself has committed to this that at the end of the five tests that make up the competition calendar, the net carbon footprint has a zero value. Zero pollution at full speed.

Because the show is insured with a list of motorsport legends, along with a list of promising four-wheelers who are going to roll through landscapes “yet to be seen”, as the organization assures. Aboard the Odyssey 21, the SUV designed by Spark Racing Technology, are competing greats of the sport such as nine-time World Rally Champion (WRC) Sebastian Loeb, joining forces with seven-time Formula 1 world champion Lewis Hamilton to form the team X44; the three-time Dakar champion, –and countless milestones– Carlos Sainz, along with his co-driver, Laia Sanz, defending Acciona; or the champions of F1, Jenson Button – also participates – and Nico Rosberg, who has his own teams.

The racing cars to which these crazy people with the aroma of gasoline will climb and now they will have to get used to the silence of the electric cars consist of wild performance. 545 horses in his hands, more than a WRC can offer, and an acceleration from 0 to 100 km / h in less than 4.5 seconds. All this capable of doing it in the dunes of Saudi Arabia, where the competition started on April 3 and 4; in the wildest cold of the Russell Glacier in Greenland; in the Amazon rainforest in Brazil; or in the southernmost point of South America, in Tierra del Fuego, in Patagonia.

It should be taken into account that Extreme E is a signatory of the United Nations Framework on Sports for Climate Action, which ensures five principles and objectives: the promotion of environmental responsibility; reducing the climatic impact of sports; the use of the platform to educate; promote sustainable consumption; and advocate for climate action through communications.

Synergies in favor of the planet

And how will the effectiveness of this project be recorded? Well, this global odyssey is possible thanks to the existence of a floating paddock that goes on board the RMS Saint Helena boat, which is responsible for transporting the cargo and infrastructure of the championship, minimizing the carbon footprint of Extreme E and in which it also A group of scientists travel on the ship to study the development of the competition and how it behaves in areas affected by climate change.

Extreme E has appointed an independent Scientific Committee, led by Cambridge University Professor Peter Wadhams, who will advise on the championship’s research and education programs, event logistics and impact, as well as recommend positive initiatives that support local communities at each championship location.

All this bearing in mind that the awareness of the world population must be strengthened for a sustainable future without dispensing with means of transport. In this regard, in a local key, as revealed by a survey carried out by the Cabildo de Gran Canaria recently (within the framework of the Mac-Clima project), 70% of the island’s population shows a “high concern” for change climate and up to 60% of those surveyed said they would be willing to pay more taxes to combat the consequences of global warming.

That is why the Council of Sports of the Cabildo, together with the Tourist Board, have appreciated the enormous importance and sporting repercussion and tourist projection that being present in this revolutionary competition represents for the name of the Island and of which a documentary will be produced. which will be broadcast on platforms such as Amazon, Netflix, HBO; in addition to distributing and promoting itself on other channels such as National Geographic, ESPN, Fox or Movistar +.

The name of Gran Canaria will be projected throughout the planet thanks to the Hispano Suiza team and specifically the Italian-Canary pilot Christine Giampaoli. On the helmet, in the overalls or on the chassis of the SUV of the wayward motoring engineer, the Island will look like “her home”, as she herself is in charge of transmitting to anyone who asks her about her feelings with her land.

Giamapoli, in addition to highlighting all the benefits that Extreme E promises, also puts the icing on an aspect that is essential for her in this championship: the mixed system of drivers that make up the team. “Promoting equality and showing that women are as fast as men is something that I love,” says the Canarian. And in it there is a good example, since in Saudi Arabia she was the only driver who rode faster than her partner, the British. Oliver Bennett.

The extraordinary performance of the goalkeepers prevents goals in Arona