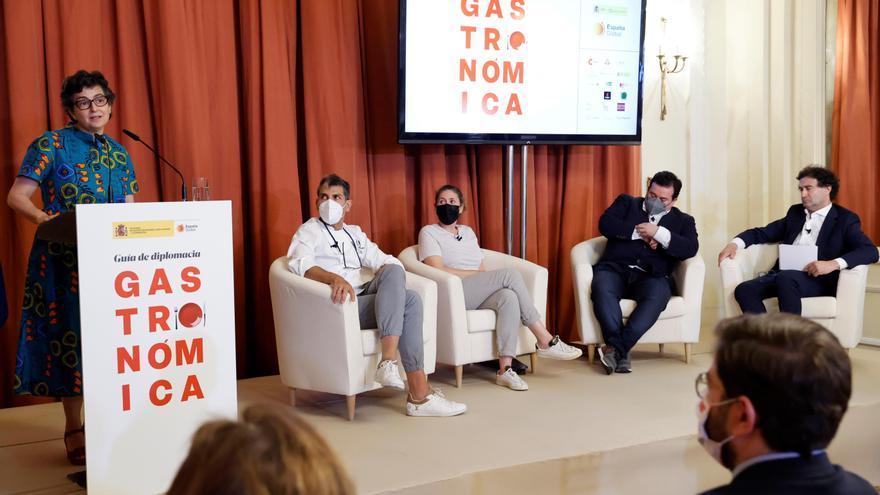 Madrid, Jun 30 (EFE) .- Exteriors today presented the first Gastronomic Diplomacy Guide, an impulse that seeks to “raise the centrality of our gastronomy” and reinforce Spain’s international projection, since this is key in sectors such as exports and tourism and that “more foreigners bring to Spain”

“Spanish gastronomy is a source of great excellence, but we also have a long way to go. We therefore want it to be a way to value what our country has to offer to the world ”, said the Minister of Foreign Affairs, European Union and Cooperation, Arancha González Laya, during the presentation.

With this first Guide to Gastronomic Diplomacy, Spain joins countries such as “Thailand, France, Peru or Japan”, which use “similar strategies”, the minister pointed out at the event, which took place at the Real Casino de Madrid and It has been led by the chef and Master Chef jury Pepe Rodríguez.

“Gastronomy is an essential part of what Spain is”, highlighted the minister, who has claimed that in addition to being “culture and lifestyle” it is “also a very important part of our economy”, in addition to “one of the things that most attract foreigners to Spain ”.

González Laya has defined Spanish gastronomy as “the result of thousands of years of evolution”, from the Greeks and Romans, who “left olive oil and wine, the first and third most exported products in the country”, to the Arabs and Jews, with “techniques such as pickling”, and also the American lands, which left “the tomato for our much appreciated gazpacho”.

The Secretary of State for Spain Global, Manuel Muñiz, has made known some of the points and lines of action present in the guide, with which it is intended to “reinforce the use of Spanish gastronomy in the ordinary activity of the representations of Spain abroad, and its visibility in events and formal acts ”.

“In essence, these lines of action and this guide involve raising the centrality of our gastronomy,” said Muñiz, who highlighted the importance of institutions within and outside of Spain “rowing in the same direction” to promote an asset that it is becoming increasingly important in international relations.

The president of the Royal Academy of Gastronomy, Lourdes Plana, has recognized that “there is no better way to win over guests than by indulging their stomachs” and has proposed “the establishment of an international day of Spanish cuisine” to add visibility, as well as meetings, workshops, activities or internships for cooking students outside of Spain.

Chef Paco Roncero also took part in the event, who stressed that “in Spain we have a unique product that we have to take advantage of much more than what we do” and pointed out that “if there are Spanish restaurants around the world, there will be Spanish product around the world”.

His partner Macarena de Castro has coincided with Paco Roncero, who has highlighted the importance of “the brand being known abroad”, in order to be able to make Spanish dishes abroad with Spanish products.

Chef Marcos Morán, at the head of Hispania in Brussels and also London, has stressed that his clientele in these countries are “citizens of the world who first of all seek quality” and has said that it is essential to consolidate Spanish gastronomy outside of Spain.