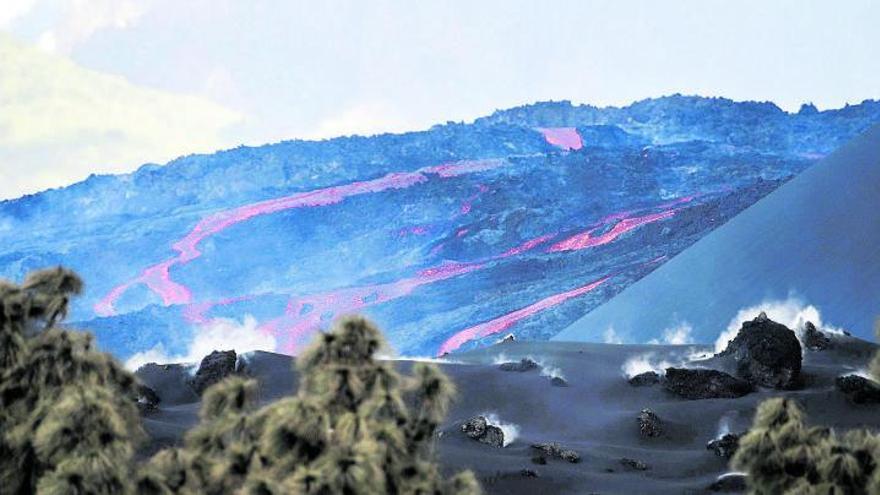 López also commented that the wind, from the South and West component, was pushing the ash cloud towards the East and Northeast of La Palma, thus affecting the operation of the airport yesterday, located in the municipality of Mazo. In fact, the Binter company announced on Twitter that it was suspending its flights with the aforementioned Island temporarily until the optimal conditions for the arrival and departure of aircraft return. According to the spokesperson for the Scientific Committee, this orientation of the wind that pushes the ash cloud will continue for the next 24 or 48 hours, at least in principle.

During the daily press conference, Carmen López pointed out that seismicity remains at levels similar to those of recent days, more than 20 kilometers deep. Until noon yesterday, the most important earthquake had a value of 4.6, it was registered at 10:19 am at a depth of 37 kilometers and was “widely felt”. Between Friday and Saturday, the three lava flow fronts continued to be active.

The spokesman for the Technical Committee of the Canary Islands Volcanic Emergency Plan, Rubén Fernández, pointed out that the only area in which the lava occupies new ground is between the flows called 4 and 7. In that sector, it has advanced 130 meters and the greatest affection It has been produced on land for agricultural use.

Within this area, the global surface affected by lava flows has grown by about three hectares. That means that, in total, since September 19, the material expelled by the volcano has devastated some 1,050.9 hectares. The delta generated by the lava in space reclaimed from the sea already occupies about 43 hectares in total, said Fernández in his speech, where he also clarified that the global width of the lava on its way to the coast is already three kilometers and two hundred meters.

Air quality is generally good or reasonably good. And it is expected to continue like this in the coming hours, depending on the fact that there is hardly any thermal inversion and that leads to a dispersion of gases, Rubén Fernández told the media.

Carmen López stated that the tremor has low values. In the field of terrain deformation on the west side of the island, according to the expert, the only relevant data occurred in a station located north of Jedey, where a ground rise of about six centimeters was detected. The emission of sulfur dioxide from the volcano continues at high levels, but, even so, lower than those of previous days, with between 10,000 and 17,000 tons per day. In the words of López, these are good or reasonably good levels, with the exception of some samples appreciated in the municipality of Tazacorte.

Rubén Fernández added that “air quality” is good or reasonably good in the Aridane Valley. The members of the Pevolca also study the arrival of strong winds and moderate, occasionally strong rainfall, which are expected from Sunday night. In fact, in the words of the spokesman for the Emergency Plan Technical Committee, a storm could also come next week.

Rubén Fernández said that, at noon yesterday, a total of 489 people remain displaced outside their homes or the homes of relatives or friends. Of that global amount, 418 are in Fuencaliente and 71 in Los Llanos de Aridane. In addition, as in previous days, 43 dependents continue to be housed in social health centers of the Cabildo de La Palma. Regarding the infrastructures affected by the lava flows, both completely and partially, the Cadastre data shows that there are already 1,467, including homes, industrial buildings, agricultural facilities or public or religious centers. Based on the information provided by the Copernicus system, the damaged buildings amount to 2,731. And the devastated agricultural area reaches 314 hectares, said Rubén Fernández.