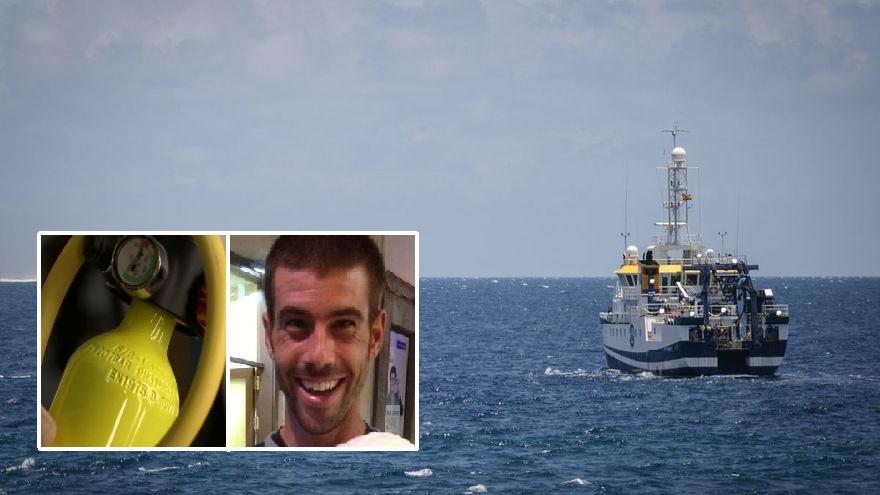 Diving experts have ruled out that Thomas Gimeno, the father of Anna and Olivia, the girls of Tenerife, have been able to commit suicide using the so-called sweet death method to lessen suffering. “The simplest method is to jump with the leads and that’s it, with or without a bottle,” says one of them, Ismael Mateos, from Buceo Madrid. “Sweet death would be the most difficult”.

In addition, regarding oxygen bottles, the criminologist Nacho Abad explains that, “From what the experts explained, you have a bottle that you put on your back and cover it whole, but these two would be like putting two side bottles on your waist, which are no more than one inch in size”, clarifies. “These bottles are used so that, if you are doing spearfishing, if you get trapped, you have a few shots of air that helps you to be disappointed”, according to the COPE Network.

“Sweet death is a death from carbon monoxide, which has nothing to do with this”. “Every ten meters of depth the pressure increases by one atmosphere. At about 50 meters this man began to have tremendous pain, I doubt that death was especially sweet “, stresses.

“The finding is fundamental, the possibility that he had thrown the girls and left the island has always hung by a thread, the finding takes away a lot of credibility to this”, Add.

The ‘Ángeles Alvariño’, close to turning a month since the search began

The oceanographic vessel ‘Ángeles Alvariño’ is only three days away from completing a month since he began the work of search for Anna, Olivia and Tomás Gimeno in the waters of Tenerife, thirty days in which he has achieved what many consider a “miracle”, such as the discovery of the oldest of the girls at a depth of 1,000 meters.

The possibility that this ship joined the search device occurred for the first time on May 17, twenty days after the disappearance of the girls and their father. It was the general director of the Civil Guard, María Gámez, who announced that they were in talks with the Spanish Institute of Oceanography (IEO) in order to have their tracking means.

In this sense, the ‘Ángeles Alvariño’ featured side scan sonar, a device that uses the propagation of sound underwater to obtain digital images of the surface of the seabed, and the ROV robot Liropus 2000, capable of recovering objects in the sea up to 2,000 meters deep; two technological elements used for the first time for the search of people and that have turned out to be vital in the course of the investigation.

Finally, The ship left the port of Vigo, bound for Tenerife, on May 23. After stopping off in the bay of Cádiz, he finally arrived on the island six days later, on Saturday 29, making the first sweeps of the seabed to try to find any clue about the whereabouts of the girls and their father on Monday 31.

The search area It ranged from the Marina Deportiva, where Tomás Gimeno had his boat docked, to the coast of Añaza, always following the tracking of Anna and Olivia’s father’s mobile phone; a wide area where depths of over 1,000 meters are reached and with great difficulty due to the orography of the islands’ seabed.

In spite of everything, when a little more than a week of the tracking work was completed, the ‘Ángeles Alvariño’ works for the first time what was believed impossible. Find a duvet cover and a scuba tank that turned out to be the property of Thomas Gimeno, as confirmed then by the general director of the Civil Guard. Two days later he achieves what many believed to be a “miracle”; find at 1,000 meters depth, about three miles from the coast, the lifeless body of Olivia, six years old.

Since then, ship of the Spanish Institute of Oceanography (IEO) has extended their stay on the island up to three times, thanks to the efforts made by the Government Delegation in the Canary Islands and the pleas of Beatriz, mother of the girls, who obtained the response of President Pedro Sánchez himself, who put all the ministries of the Government at your disposal.

Despite suffering two breakdowns and several technical stops, the oceanographic vessel continue this Saturday searching the seabed trying to find Anna and Tomás, especially after finding this week at 1,500 meters deep, about five miles from the coast, two small oxygen bottles, also owned by Tomás Gimeno, which according to the hypotheses managed by the Civil Guard could be used to remove the lifetime.

While the ‘Ángeles Alvariño’ continues to develop his work, The Civil Guard tries to find other technological means that can replace the ship once it resumes the work of the Spanish Institute of Oceanography, as can be a submarine. In fact, the Cabildo de Tenerife has already proposed using the private submarine ‘Piscis VI’, which is the one with the greatest depth capable of descending in the world, reaching 2,180 meters, and which was installed on the island last February. .