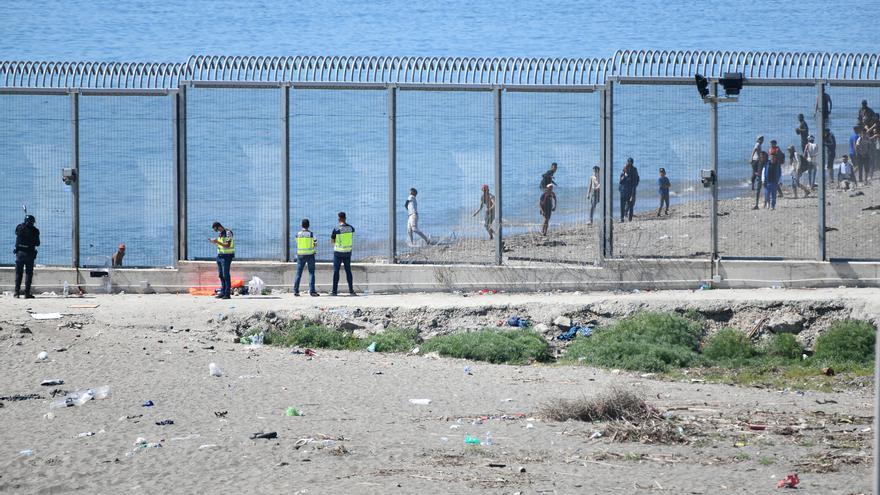 The government from Spain has been working for months in the construction of a "smart border"That endows the border posts that separate the autonomous cities from Ceuta Y Melilla of Morocco with cameras facial recognition. Although the executive's plan follows the guidelines set by Brussels, a network of humanitarian and social organizations denounced this Thursday that the use of security systems Artificial intelligence (IA) can violate the Fundamental rights of those who try to set foot on European territory.

Until now, to non-EU citizens who want to enter Spain their personal information and a document that proves their identity is collected. The plan agreed in 2017 by the European Comission complements that model with the use of cameras facial recognition devices that detect the faces of travelers, collect four fingerprints, record the dates and places of entries and exits and also cases of denial.

At the end of 2019, the Ministry of Interior advanced that the deployment of this new border computing tool would cost 4.1 million euros. The works were to be completed in a 24-month period that has not been completed.

This system is viewed with concern by more than 40 civil organizations specialized in the defense of digital rights and in the protection of vulnerable groups such as the migrants. “The 'smart border' poses a danger of discrimination and criminalization and turns it into a new racist device within the Spanish State ”, denounces the joint letter published this Thursday.

And it is that, far from being perfect, AI systems incur more identification errors with racialized people and with minors, as they train the precision of their algorithms with data mostly from Caucasian and adult people. As seen in the Netherlands, such mistakes can take the lives of thousands of people. “In London facial recognition has led the police to detain racialized people rather than whites. The same thing will happen at the borders ”, he explains to EL PERIÓDICO, a newspaper that belongs to this same group, Prensa Ibérica, Ana Valdivia, Associate Researcher in Computer Science at King's College London and one of the promoters of the statement.

That is why the more than 40 organizations that denounce this measure ask that they be allowed external audits to detect algorithm flaws and systematically recruit human rights observers at border posts where these cameras are applied. "Until now they have rejected the audits because they say that it is sensitive information, but it is not true, you can analyze the error rate according to gender, ethnicity or demographics without exposing the privacy of the algorithm," adds Valdivia, doctor in AI.

The main argument put forward to implement the “smart border” is its supposed efficiency by streamlining border controls. All the stored data would be crossed with those registered in the identity controls that exist in Spanish ports and airports in order to verify the coincidence between entries and exits. In other words, this AI system seeks to automatically detect who enters and leaves the country and launch alerts if a foreigner is in the country. Schengen area European free movement with your visa expired. That data would be kept for three to five years and then should be erased. Despite this promise, government sources told 'El País' that the border will be safer "but with less agile flow."

The European Union (EU) works in a regulation that prohibits facial recognition systems on the understanding that they have a "high risk" but allows them in exceptional cases for security, crimes or prevention of terrorism, which opens the door to their use at borders. “Since the 9/11 attacks, the pretext of terrorism to avoid the inspection of this type of measures ”, denounces Valdivia. The signatory organizations ask to eliminate this exceptionality.

The statement also notes that the compilation of the biometric data of vulnerable people violates their privacy and can have “unintended consequences”, such as expediting the transfer of asylum seekers from one EU member state to another against their will. The Dublin Convention establishes that migrants must request asylum in the first European country they enter, even if their families reside in another.

Morocco closed its border on March 14, 2020 forced by the irruption of the crisis of the coronavirus. After almost two years of closure, it is expected to reopen it during the first half of this year, although there is still no specific date. The complex situation of Ceuta and Melilla - over which Rabat claims its sovereignty - led the government of Pedro Sanchez to create last December a commission to study the plan to reopen the borders, as advanced 'The country'. The departments of the Presidency, Territorial Policy, Interior, Foreign Affairs, Finance, Health and the secret service (CNI) participate in this commission.

In addition to the so-called “smart border”, the reopening of the Moroccan borders poses other major challenges for the Spanish Government such as the commercial and economic situation of Ceuta and Melilla, the possibility of including them in the Schengen area, the compatibility of vaccines against him covid-19 between territories or requests for asylum and refuge.