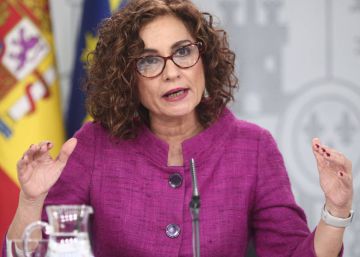 Article 49 of Royal Decree Law 11/2020 was yesterday in the hands of not a few State attorneys looking for a correct interpretation. Approved on Tuesday and published the next day in the BOE, in just 20 lines the Ministry of Finance opens the door to a eventual intervention of all or part of the “liquid availabilities” of “autonomous organizations and other member entities of the state public sector”. Uncertainty spread among large public companies, as they are part of the state public sector.

This exceptional measure seeks to generate credit in the Contingency Fund to have budgetary items for the expenses generated by the coronavirus. One of the largest state references, Aena, He consulted the ministry itself to find out if his box was safe.. Yesterday, concern also spread among various port authorities. “Some are going to defend essential investments and they are clear that their cash will be made available to work to tackle the crisis,” a source close to the ports quoted.

The airport operator stated before the CNMV that “article 49 of the aforementioned Royal Decree Law 11/2020 does not apply to Aena”. The group, 51% controlled by the State, listed and subject to public law, argued that “the non-applicability of this article to our company has been confirmed by the majority partner, the General State Administration, through the Ministry of Estate”.

Lawyers are affected by Royal Decree Law 11/2020 to Aena, which has been exempted by the Treasury, or Adif and Renfe, among others.

The department of María Jesús Montero tried to reassure yesterday regarding a hypothetical intervention of the liquidity of large public entities, ensuring that those affected by the royal decree-law are organizations and entities “with limiting budgets”, although the rule was not stated. In this way, references such as Aena and other public companies would be left out.

Article 49 of Royal Decree Law 11/2020 “authorizes the Minister of Finance to require the entry into the Public Treasury of all or part of the liquid assets” of “autonomous bodies and other entities that are members of the state public sector, of in accordance with the provisions of article 45 of the General Budgetary Law ”.

The Treasury interprets that by the chapter where that article 45 is inserted, it refers only to entities with limiting budgets and not to public companies such as Aena, Adif or Renfe. Legal sources, however, maintain that now the door has been opened to intervene the public company fund because the mere situation of the aforementioned article 45 is not enough to limit the scope of the new decree if it does not differentiate between some entities and others.

However, the Treasury transmitted to Aena that it does not intend to intervene its cash and that, although the decree does not say so, will only use the liquidity of entities with a “limiting budget”. The ministry justifies it in that the decree refers to article 45 of the LGP, which is integrated in chapter IV of said law (“Of the credits and their modifications”) and not in reference to commercial companies. The lawyers’ doubts arose because in the recently approved decree the “entities that make up the state public sector” are mentioned without distinction.

What do the lawyers say?

Up to three specialists in public law, consulted by Five days, guarantee that the Treasury has been given access to the liquidity of the entire public sector with Royal Decree Law 11/2020, of March 31. “The term state public sector is very broad and, therefore, it includes both autonomous bodies and public business entities and state mercantile companies. Therefore, this measure [por el artículo 49] it applies to all entities that depend on the State Administration, regardless of their form of personification, “declares José Ignacio Monedero, of counsel at DLA Piper.

Head of the public law department at the Madrid office of the firm, Monedero states that, in his view, “Aena, Adif, Renfe, Correos, Loterías, Paradores, among others, and the companies of the Patrimonio group or the SEPI, where the State has more than 51% of the capital ”, have been indicated by the royal decree law. Of course, qualifies that “the transfer is limited to the liquid amounts that these entities have, not necessary for the exercise of their budgeted activity.”

With this opinion agrees Eduardo Gamero, director of Montero Aramburu Abogados, who sees the “scope of this provision [artículo 49 del RDL 11/2020] determined in article 2 of General Budget Law 47/2003, of November 6 ”. In other words, the entire public sector.

A third voice, that of Iria Calviño, of counsel by Herbert Smith Freehills, argues that “article 49 of RDL 11/2020 provides for the transfer to the account of the Public Treasury that is determined of the liquid availabilities of the autonomous organizations and other entities that are part of the state public sector (within the limits of the General Budget Law) “

After framing the controversial article 49, Calviño stresses that “for these purposes, in accordance with the provisions of the regulations governing the legal regime of the public and budgetary sector, which delimit the scope of the state public sector, not only the Territorial administrations, but also public bodies and other entities governed by public law, such as public business entities, independent administrative authorities and state trading companies. For example Aena or Adif ”.