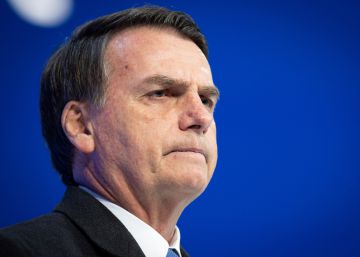 The ministers of all the democratic governments that preceded in the last decades to which Jair Bolsonaro presides are being erected in the closest thing to a political opposition in Brazil. If first they were the former owners of Environment, Education and Justice, this Tuesday five ex-Ministers of Culture have made a joint appeal in the Public University of São Paulo (the USP) against the devaluation of the sector and hostility towards artists promoted by the head of state. "It is necessary that we face this apocalyptic discourse against everything we build in the democratic period," said Juca Ferreira, who led the portfolio with the now incarcerated Lula da Silva.

Ferreira has appeared with ministers of the governments of the last 35 years, since the end of the dictatorship and the entire political spectrum. What has united them for the first time, they have stressed, is President Bolsonaro's decision to eliminate the Ministry of Culture and a speech that was already exhibited in the campaign and that has not been tempered by the arrival to power that portrays culture as an enemy. "The growing antagonistic discourse against the arts and culture seeks to weaken the achievements made by Brazil in these years of democracy," according to the manifesto they have signed. Beginning, for the threatened freedom of expression.

Brazil has been a great cultural power for decades, especially in music but also in film and plastic arts. The Brazilians consume it and export it. As the manifesto and recalls Marta Suplicy (who was with Dilma Rousseff), culture is undoubtedly part of the soft power (of the soft power) of Brazilian diplomacy. An asset and a legacy that Bolsonaro despises.

If there is a symbol of that demonization of culture, it is the Rouanet Law. This norm approved in 1991 to facilitate access to the culture of all Brazilians in all corners of the vast territory allows companies to subsidize cultural initiatives in exchange for tax exemptions. The controversies and reforms have accompanied his evolution.

With these words the president described it when announcing his reform to his followers on Facebook. "This misfortune of the Rouanet Law began with good intention but then ended with that party that everyone knows, co-opting the artistic class, famous people to support the Government. How many times did they see celebrities shout 'Lula Libre', 'Viva el Che' or 'Socialism is what matters', "he said, announcing that the maximum subsidy per project falls from 13 million euros to 230,000 euros. , this law has injected almost 50,000 million reais (11,000 million euros) through more than 50,000 cultural projects, according to a recent study by the Getulio Vargas Foundation cited by Nexo.

The consequence of the hostile speech of the president, of his active followers in networks, and of the cut of the public money for the arts is, explained the former ministers, that is suffocating the sector and that it is increasingly evident the fear of companies to support economically cultural activities in the face of the virulence of polarization.

The ultra-rightist has managed to eliminate the ministry (which his predecessor tried unsuccessfully) but has also dramatically reduced public money for the cultural sector. The manifesto of the Ministers of Culture arrives when Bolsonaro has been in the Presidency for six months. But before it was preceded by similar pronouncements from former owners of the Environment, Education and Justice, who, for their portfolios, have united and raised their voices to express their concern about the decisions of the new Government and their attempts to dismantle the legacy of the previous ones.

Marcelo Calero (minister with Michel Temer) has stressed that "the Government must understand that it represents us all, not only its voters, and must contribute to concord." Ferreira, Suplicy, Calero, Luiz Norberto Nascimento Silva (minister with Itamar Franco) and Francisco Weffort (with Fernando Henrique Cardoso) have emphasized the importance of culture "as an expression of our identity and diversity, as a fundamental right and as a sector of economic development , contributing decisively to the generation of employment ".

Maluma joins the megaconcert of the reopening of New York

Peruvian Pía León, chosen as the best cook in the world by “50 Best”