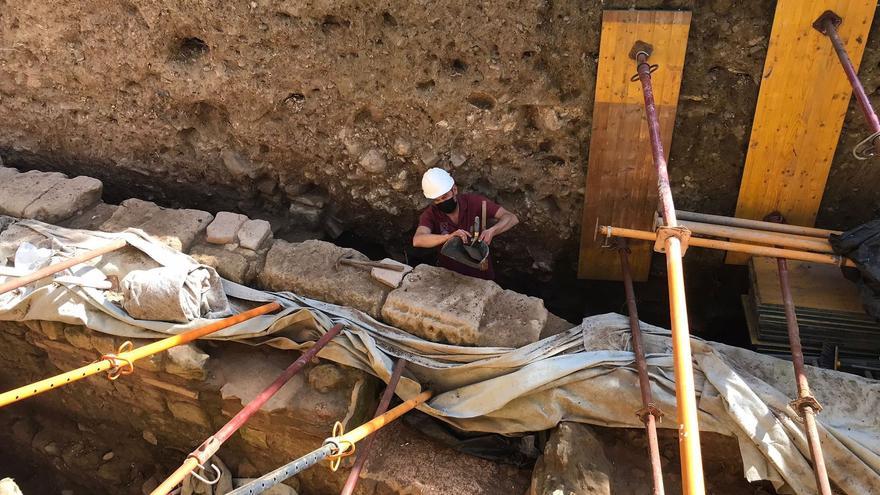 The excavations currently being carried out by the Council and the University of Cordoba (UCO) in the Courtyard of the Orange trees of the Mosque-Cathedral point to the existence of a great episcopal complex prior to the construction of the Aljama Mosque of Cordova. This has been indicated by the director of the excavation and professor at the UCO, Alberto León, (together with the archaeologist of the Cabildo, Raimundo Ortiz), who considers that with this hypothesis it can be “absolutely” ruled out that the Mosque was built on the church of San Vicente, a widely extended idea and part of the studies that Manuel Gómez Moreno formulated at the beginning of the 20th century.

The University and the Cabildo are currently undertaking a series of archaeological tastings in different plots of the Patio de los Naranjos and which are part of a project, started in 2015, aimed at complete, digitize and deepen the work that Félix Hernández made in the monumental complex in 1934. In other words, excavation is being carried out in the same area that Hernández already worked on, accessing, of course, points to which he did not access, and now following the current methodological basis. The temporal plan that is intended to unravel ranges from the first moments of the occupation (Roman times) to the construction of the Aljama Mosque by order of Abderramán I.

Exposed mosaic in part of the excavation. FRANCISCO GONZÁLEZ

Among the elements that have been defined are columns that define a portico or a vestibule topped by apses that would give way to a central bay with a series of rooms. To the east it would rise a monumental building defined by a large wall of more than 30 meters. As explained by León, this is dated in the 5th century and it is understood that, later, it was monumentalized.

With the current excavation, the archaeologist has detailed, they have documented at least six or seven different construction phases, not only associated with the late-ancient stage, but also with the Islamic occupation (both prior and contemporary to the construction of the Mosque).

The episcopal complex that stars in the current works hypothesis went through different stages. According to León, that building would form a closure on the northern side. This first stage is located, in principle, in the fifth century, and a mosaic which is “one of the few testimonies we have of pavements, since after the Islamic conquest” there was a process of razing and looting and reuse of materials that greatly affected the previous buildings, “said León.

Later that great building would have undergone a monumentalization. It is understood that in the 6th century it incorporates the apse which is entered through a door almost four meters wide. After the conquest, another wall is built that closes a space of a certain monumental entity, something that experts understand was an ideological movement (it was directly covered up to obviate its previous use).

Plan of the excavation being carried out in the Patio de los Naranjos. FRANCISCO GONZÁLEZ

In the Islamic occupation phase, a well was dug, León explained, where materials and construction remains were first thrown and then animal bones. among which there are no pig remains, which leads to think that it could already be fully used in Muslim times. After this, another of the documented phases is already the construction of the first minaret of the Aljama Mosque.

León has influenced the idea that “it is not necessary to obsess over the church of San Vicente”, it is probable, he added, that it was “the episcopal church”, but, in turn, it was part of a larger building. That building would be a great episcopal complex made up of three large parts: the basilica, the baptistery and the bishop’s palace (which could become a residential building, an atrium where food is distributed or a public administration space, among others).

Apart from these more defined parts, this complex would also have warehouses, chapels, even some funerary space. The hypothesis that arises is that given the great entity that the complex is presupposed extend, at least, to what is now the Puerta del Puente.

“It is not necessary to be obsessed with the church of San Vicente”, indicates Alberto León, director of the excavation and professor of the UCO

To reach this conclusion, the central piece of interpretation has been the apse, an element that could be found in churches or in official representation spaces. Taking into account that there are compartments, it can be ruled out, in part, that it was a church, so experts understand that what was found would be a bishop reception space. This indicates, León explained, that it was closed in the Islamic era because it had an ideological charge.

What does seem to be somewhat clearer is that it was not an isolated building from the city, but quite the opposite, a central space of the same during the V century that would remain until the Middle Ages.

_juno: “The effect of the pandemic has been devastating throughout the musical and cultural sphere”