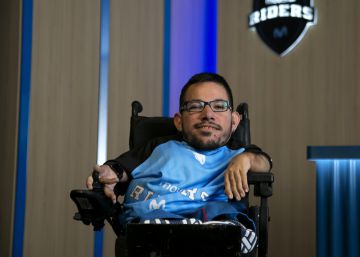 On weekends he goes out with his friends to dinner, listen to music or go for a walk. Admire the footballer Leo Messi and is culé of heart. Aritz Acevedo, 31, better known as Moyorz87 (Pamplona, ​​1987) has been generating video game content on YouTube for four years while dealing with a disease called osteogenesis imperfecta or crystal bones, which forces him to be in a wheelchair practically since he was born. In addition, it is the new signing of the eSports Movistar Riders team.

Breeder and prankster character, Moyorz87, who downplays his illness at all times, explains that he was diagnosed with only three months of life. "The doctors thought that my mother mistreated me because I had many fractures," he says. However, “video games have been a way of disconnecting from real life in a cool plan. And they have accompanied me in many moments to better take my disability, ”he explains.

Moyorz says that in a video game there are no barriers, that everyone can be whoever they want. Four years ago he began broadcasting on his YouTube channel. “At the beginning I was having a little trouble showing my face and that everyone saw me on the internet but my friends told me that if you want to stand out on YouTube you have to do something different and they told me that I am unique and different,” he explains.

Not everyone approaches Mayorz87 in good ways. “I remember one comment: if I see you in Pamplona, ​​I throw you from the wheelchair. At first I was afraid, but you have to recover and continue. Many people hide in the anonymity that gives you being behind the screen"

It is clear that there is always someone better than yourself playing video games so he believes that the key to his success comes from that “I am a joker and the pot goes away. Besides, I don't play badly, ”he says. The youtuber has almost 160,000 subscribers. With them enjoy chatting and talking about their experiences. It's on Twitch (platform that offers a video service on streaming video) for a year and feels like family. “Many things are shared. I laugh a lot with them but sometimes if you have to cry, you cry. ”

Although not everyone gets close in good manners. “I remember one of the comments: if I see you in Pamplona I throw you from the wheelchair. At first I was afraid, but you have to recover and continue. Many people hide in the anonymity that gives you being behind the screen. "

The success of his channel was not immediate. It took three months to have 200 subscribers. But when he reached 5,000 he proposed to his followers that if he doubled the number he would dye his hair the color they wanted, without imagining that months later there were more than 10,000 people enrolled in his channel and he had to dye his hair pink. "If they already look at me little in the street, that's what I was missing," he jokes. Moyorz says that the great step of 20,000 to 40,000 subscribers was produced by a video entitled "If I can you can", where he teaches the public how he takes the controls and how he plays despite his disability.

The youtuber He wants to do something very special if he reaches 200,000 subscribers: "I will ask them what they want and see what I get because they are a bit of a bastard," he laughs. The content generator admits that it is not bad playing Fortnite, Counter Strike Y FIFA. In addition, he is now starting to play with the new mode of League of Legends (LOL).

Artitz Acevedo studied at an integration center in Pamplona. Then he went to the institute and when he finished first of the ESO (with 13 years) he had to stop attending due to difficulties in his illness. Finally, he resumed his studies and finished secondary education. Moyorz learned to use new technologies in an occupational center in Navarra. “They taught the kids how to use social networks and write news but I got bored because I was quite monotonous and wanted to do other things because I didn't enjoy it at all,” he says.

The youtuber He moved to Dubai for seven months in 2018. His father found a new job and decided to accompany him. "I took my computer and my camera and I continued broadcasting from there." Moyorz says that in Dubai is ‘the most in the world’. “The biggest, the most expensive and the most ostentatious’ although the contrasts also caught my attention: there are areas of extreme poverty. ”

Always supported by his family

He now lives with his mother because his father is still in Dubai. “She stays with me for a month and a half, then leaves with my father another time. When he is away I stay or with a friend or a personal assistant who helps me, ”he says.

Moyorz is very proud of his family. He is an only child and since he created the channel, his parents supported him because he was having a good time. “Enjoying what you do is the most important thing,” he says. He wants to live on it always and knows that, now, in Spain it is not easy to find a good job "and more for a disabled person," he says. Although "I believe that everyone has a disability because nobody is capable of doing everything," he adds.

Moyorz highly appreciate that the Riders have noticed their work and believes that it is an incredible opportunity to continue learning and moving forward. "I will be as content creator on your YouTube channel and on Twitch." Moyorz demonstrates his energy and his desire to progress in each comment: “I have told you to point me to everything because I like all games. What I want is to have fun. ”