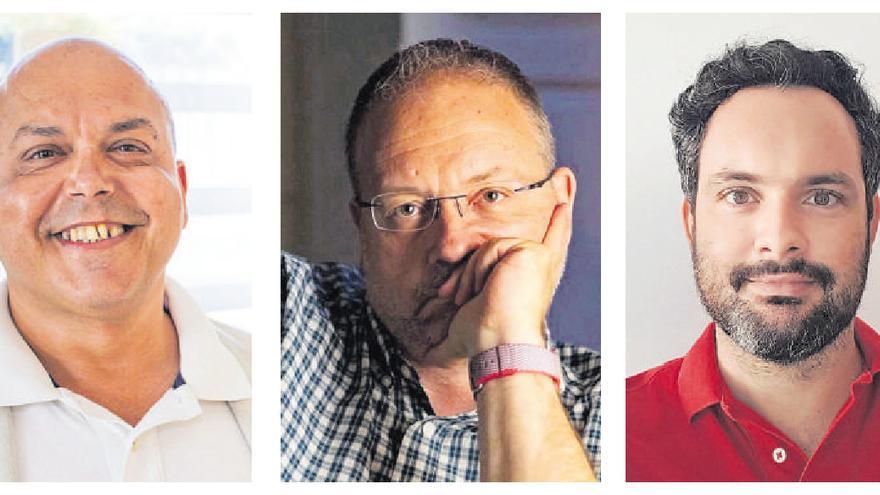 The ULL-FECAM Chair of Cultural Management and Policies has just been created. How did it come about?

Tomás Afonso: A group of public and private professionals in cultural management, experts and university researchers have been trying for some time to find a space in which to update agendas according to problems that affect cultural and management policies. The analysis of the evolution of the sector, especially in the Islands, is closely related to a much broader reflection on the degree of sustainability that our cultural systems have in the face of changes in cultural life and the effects that the crisis caused by the pandemic -economic, social and cultural-. This involved the search for a space, demanding enough, to start the project.

It sounds very complex, how many professionals do you have?

Alejandro Martín Perera: He is currently in about fifteen regional, national and international professionals, but whose objective is to provide specialists linked to the chair that allows addressing the multiple facets, lines of action and work groups that are planned, generating a wide network of professionals at the service of Canarian culture and society.

So the purpose of this chair is to promote, develop and enhance culture from different areas …

José Antonio Ramos Arteaga: The chair, there is no doubt, will be a body at the disposal of the municipalities to advise the technicians, the political leaders of these local agendas. But we understand that there are two essential elements in our role as chair so that this advice does not remain a mere consultancy: preparing a set of documents of good practices that help in decision-making at the local level and connecting the work that from the The field of university research is currently developing through its research groups, study centers, other related chairs or individual initiatives in faculties and centers.

And have you already thought about what the first step of this project will be?

JARA: Yes, one of the first proposals of the chair will be the creation of a journal (with all the parameters of academic quality required by the evaluation agency) that brings together both these aspects of university research and intervention and the contributions that from The practice in the sector can help the work of reflection or the comparison with actions that can be emulated in the Islands.

How will this interdisciplinary task be carried out?

JARA: Interdisciplinarity in the field of cultural management is mandatory, since it involves many factors in its design and implementation, ranging from the merely technical to sociological and artistic considerations. That is why we insist that the local should not become a small development of macro-cultural policies in the abstract, but rather claim its specificity and differentiated creative capacity.

Among its objectives we find “To develop new formulas for cultural management with the promotion of R + D + I projects.” Perhaps it was necessary to see culture from a broader prism?

TA: In the Canary Islands, we continue to think and work from cultural management with tools and ways of understanding culture typical of the nineties of the twentieth century in the best of cases. If we carefully analyze what is happening in other territories, culture and its management have evolved in accordance with the rhythms set by society itself. It is not acceptable that culture is not understood as a transversal element, generating employment, capable of promoting citizen participation and above all, as an engine of social change.

AMP: The technological transformation of the sector and the digitization of its fabric are part of the objectives of the Chair, as a “watchdog” agent of the trends that are developing or emerging in culture.

For this reason have synergies been created between the University, Public Administrations and private entities?

AMP: Indeed, the synergy and vision that the university, the public administration and the private business sector can give on cultural management and policies are enriching, due to the very angle from which each one works and analyzes culture. . The perception, the approaches, and with it the resolution and actions are different but not exclusive, so the representation and joint and coordinated work from these three realities that are represented equally in the heads of their directors and managers is much more effective. in the human team that is gradually enriching the professional staff of the chair.

Are you not concerned that this initiative is seen as an attempt to politicize culture?

TA: On the contrary, we live in times where culture is excessively politicized. The chair aims to help lower this pressure and relax, through the work to be carried out, providing local administrations with tools, training their staff and government teams, highlighting good practices, promoting networking, developing knowledge through publications. Who better than the University and the FECAM, which encompasses the 88 municipalities of the Canary Islands, each with a different political orientation, but with a common objective, which is the defense of municipalism, to carry out this task.

It seems that it is time to understand culture as a source of economic resources (job creation, investment, new business models), don’t you think?

TA: As we have said, and although it sounds very simple, culture is an investment, not an expense. It is the result of a conquest, and today it is considered a human right.

JARA: Obviously, cultural management, from the public point of view, is not only an artistic product within what has been called “good for cultural consumption.” It involves the technical part that schedules and manages it from the Administration, those who work on its materialization, those who program, disseminate it, etc. And the municipalities know that well, since they are the administrations that invest the most in culture in the Archipelago.

AMP: Obviously, when you talk about culture you are talking about investment. Each euro invested in culture supposes a very broad economic and social return, because it has a multiplier effect due to its transversal nature.