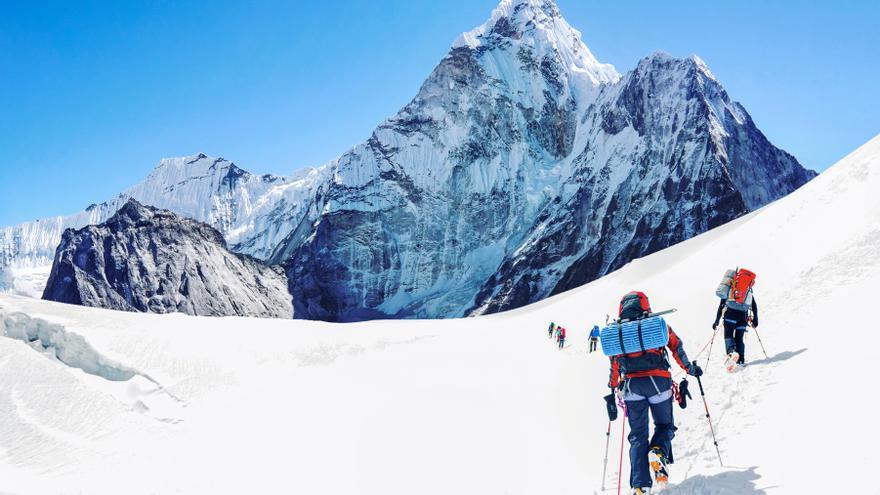 After a year out of reach of the mountaineers because of the pandemic, Nepal reached a record number of permits to climb Everest this spring this Friday, an achievement driven by the withdrawal of restrictions despite the fact that the Himalayan country is mired in a second wave of covid-19.

“These are record numbers, and they could go even higher“The director of the Department of Tourism, Mira Acharya, told Efe on Friday, explaining that professional mountaineers do not need much acclimatization time,” so they normally continue to request permits until the end of April.

Thaneshwor Guragain, the director of the largest Nepalese expedition company, Seven Summit Treks, told EFE that foreign mountaineers seem desperate to climb Everest, and “that is obviously a good sign for tourism in Nepal.” Furthermore, he added, that China did not open its side of Everest may have helped the record number of registrations.

A boost to the economy

In 2020 access to Everest was closed on both sides, both in Nepal and China, but Kathmandu has reopened its borders this year to revitalize the wounded tourism sector, so hundreds of climbers are preparing to fulfill their dream of crowning Everest this year.

The Everest region is bustling again after a painful 2020 without tourists, as yaks and ponies scramble to transport supplies from Lukla Airport to the base camp located at 5,380 meters of altitude, and porters and mountain guides are back in business.

According to a World Bank report released this month on the level of development in Nepal, nearly a million jobs in the tourism and transportation sectors were destroyed by the pandemic last year. The official coffers usually receive about 4 million dollars in climbing permits, since each foreigner pays about 11,000 dollars per permit, to which are added expenses of between 40,000 and 90,000 dollars for equipment and companions with which to climb.

Despite the long-awaited rebound in economic activity, coronavirus cases are on the rise in Nepal and this Friday the country reported 2,449 new infections, triple the number a week ago. On April 15, a Norwegian climber had to be evacuated from Everest base camp and, after his arrival in Kathmandu, he was diagnosed with coronavirus, becoming the first confirmed case on that mountain.

This gradual increase in numbers has sparked fears that this second wave of the covid-19, after the Asian country registered a peak of about 5,700 cases at the end of last October followed by a gradual decline. In early March, Nepal had just added 70 new infections a day. But beyond the pandemic, many mountaineers aspire to break climbing records.

Records on top of the world

Record holder Kami Rita Sherpa, 51, has announced that this year he will attempt to break his own record by climbing Everest for the 25th time after having his intentions thwarted in 2020.

Sherpa does not rule out reaching the top twice in a row. “It’s what I’m thinking, but it will depend on the weather conditions (…). I may go back to base camp and come back to the top with a team from Bahrain, “Sherpa told Efe. The experienced mountaineer will begin his ascent to Everest to open the route thanks to ropes and ladders, preparing the way for the rest of the climbers.

The Chinese Zhang Hong, 46, seeks this spring season to become the first blind man from Asia, and the third in the world, to crown Everest. “Zhang will be assisted by four guides“, Steven Sherpa, the director of Asian Trekking, who manages the climb, told Efe Dawa. After the Chinese climber announced his intention to crown the highest peak in the world, the also visually impaired Chitra Bahadur Khatri Nepalese, also announced his intention to reach Everest.

Better known as Amit KC, the climber appealed to the Supreme Court and managed to annul in 2018 a law that prohibited blind people and those who have suffered double amputations from climbing Everest, described as discriminatory for the disabled.

For the American Colin O’Brady, his personal challenge is to climb both Everest and Lhotse, the fourth highest peak in the world at 8,516 meters, in one go. “This spring I will try to climb Everest and Lhotse without stopping or using supplemental oxygen, “he said on the social network Instagram.

The first person to achieve this feat was the American guide Michale Horst, on May 14, 2011, in about 21 hours and with the help of oxygen. “Juan Pablo Mohr, my dear friend who recently passed away at K2 in Pakistan, prompted me to attempt this journey without oxygen,” added O’Brady.

Spanish athlete Kilian Jornet intends to explore Everest’s dangerous western ridge without supplemental oxygen, according to a Nepalese expedition organizer who requested anonymity. Sheikh Asma Al-Thani, an adventurous member of the Qatari royal family, also seeks to be the first woman in her country to reach the roof of the world, an ambition born from his desire to break stereotypes.

All the goals of matchday 40 of Segunda

Andrea Sánchez Falcón: “Hopefully they don’t put a roof over women and we can continue”