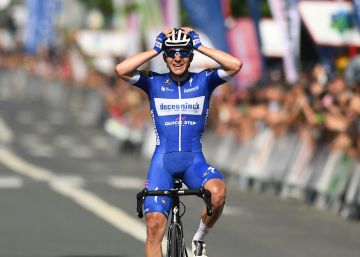 The young Belgian prodigy Remco Evenepoel, 19, won the victory in the 39th edition of the San Sebastian Classic, benefiting from the mid-career abandonment of the big favorite for the triumph and winner in 2018, the Frenchman Julian Alaphilippe.

The triumph of the Deceuninck-Quick Step corridor was set, as expected, on the ascent to the top of Murgil Tontorra, an elevation with the narrow and twisted road, in which hundreds of fans meet, and who arrived together Victory favorites very close and finish.

Mikel Landa, who was not well at any time of the day, had given in before, not so Alejandro Valverde – world champion – or the Colombian Egan Bernal – winner of the Tour – which thus became the highest contender to win in San Sebastián .

But Evenepoel attacked before. He took a few kilometers to make room for Tom Skujins and left him behind seven kilometers away.

The group tried to hunt Evenepoel, but the Belgian already tasted the great success and kept the hole down the port and in the streets of San Sebastián to raise his arms alone at the goal of the Gipuzkoan capital.