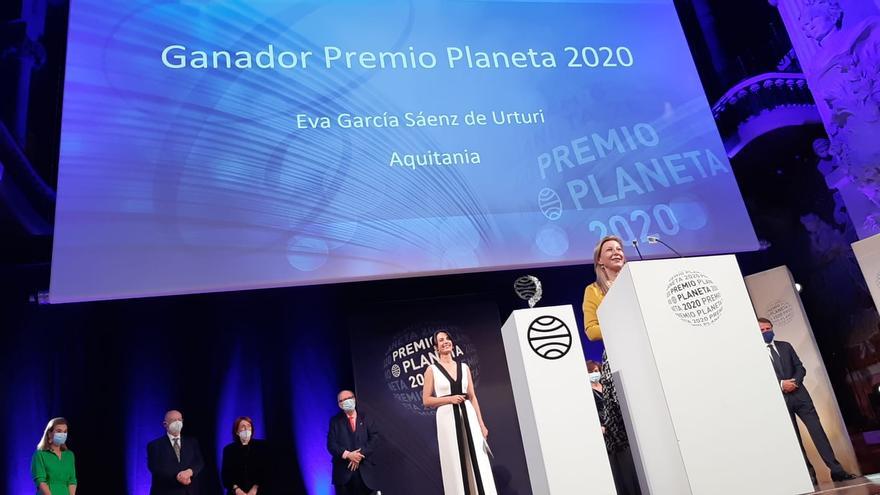 The Planeta 2020 Prize has gone to two authors: the best seller of the house, Eva García Sáenz de Urturi with the novel Aquitaine, which has emerged as the winner; and television host Sandra Barneda, finalist with the novel An ocean to reach you.

This was dictated this Thursday at the Palau de la Música Catalana in Barcelona by a jury made up of José Manuel Blecua, Fernando Delgado, Juan Eslava Galán, Pere Gimferrer, Carmen Posadas, Rosa Regàs and Belén López, as voting secretary, who had to deliberate on ten finalist works selected from among 582 submitted and from around the world.

If last year many applauded that the Planet “returned to quality literature” at the hands of Javier Cercas and Manuel Vilas, this time the rumors pointed to the best-endowed award in the Spanish language (601,000 euros for the winner and 150,250 for the finalist) it would necessarily go to the hands of names with a strong commercial pull, whether or not they corresponded to the prestige of literary circles.

Sáenz de Urturi (Vitoria, Álava, 1972) is known above all for its Trilogy about the white city, inspired by his hometown and composed by The silence of the white city, The water rites Y The time lords, which to date have produced more than fifty editions and the magic number of one million readers. That at a time when established names yearn to reach 5,000 copies sold.

The winning work is entitled Aquitaine, “A medieval thriller, a tribute to The name of the rose and a Game of Thrones of what would later become Europe, ”said the author, who dedicated the award to the victims of the pandemic. “The world of culture will survive this pandemic, explain it to us and move forward. My characters have a motto, three S’s: I only know how to follow. Literature only knows how to go on, always ”.

If Sáenz de Urturi, it could be said, was a clear candidate to win the Planet, the finalist was a surprise instead. Sandra Barneda Valls (Barcelona, ​​1975) is currently a popular figure thanks to her work as a presenter in the program ‘La isla de las temptaciones’ by Telecinco and Cuatro, but her facet as a writer was not as well known, in which titles such as Laugh in the wind (2013), The land of women (2014), How to build a superhero (2014), They will talk about us (2016) and The daughters of water (2018).

Barneda’s work is titled An ocean to reach you. The author, who could only be present by videoconference, stated that it was “a dream.” “I write to reinterpret myself, to reinterpret the world, to tell and to tell myself. This novel is a tribute to the vulnerability from which we hide so much, a novel that embraces the wounds of life. A novel that speaks of, as we have seen this year, the need to value the ordinary as extraordinary ”.

These two names will aspire to once again conquer the top of the Christmas sales charts. However, unlike other editions of the award, this year’s winners will hardly be able to do the promotional tour of the award, which takes the winners throughout Spain and Latin America. But it is just one more aspect of a Planet that has been atypical in everything.

“Ah, but are they celebrating the Planet this year?” That has been the most asked question in Spanish literary circles in recent weeks. In a city like Barcelona, ​​which these days weighed the threat of harsh restrictions due to the pandemic, the feeling of provisionality has been a burden that the organization has managed to solve by reducing the format of the award: reduced press deployment and suppression of the delivery gala have been the measures that have made this edition viable.

In other words, this year there was no dinner with authorities, businessmen, media celebrities or star writers, that display of power that the Planeta group carried out once a year to remember its hegemony in the Spanish publishing market. Specifically, it has gone from a thousand guests at the last gala to 200 this Thursday, almost entirely journalists. Naturally, all with a mask.

On the other hand, Planeta could not miss the opportunity to take its flagship for a walk in a 2020 that has been extremely difficult for the world of books, with publishing labels that have billed 40% of what was planned for the entire year. Taking into account that last year the winner of the Planet, Javier Cercas, sold 250,000 copies in Spain and Latin America and in its edition in Catalan, and Manuel Vilas 120,000 copies, it will be understood that the option of waiting until 2021 to re-convene the award nor was it mentioned.