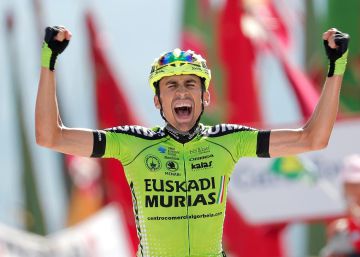 The Euskadi Murias team leaves the Spanish professional squad a little more orphaned. The times in which Hispanic squads flourished in cycling are far away. Now, except for the structure that Jose Miguel Echavarri and Eusebio Unzue once mounted, and which continues to lead the latter under the sponsorship of Movistar, there are no Spanish teams in the Elite World Tour category, and in the second step, in which they survive the Caja Rural and the Burgos BH, the gap left by Euskadi Murias remains vacant.

“Today we can officially confirm that the Euskadi - Murias team will not continue next season. The summary of these years is of enormous satisfaction. The sports results obtained and the spirit created within the team, both by the different athletes who have been with us during these years, and by the staff technician have made the result has been honorary registration, ”says the official statement of the sports group, which leaves after five years, despite the fact that its director, Jon Odriozola, maintained the hopes of continuing during the last Tour of Spain.

The team expected the entry of a new sponsor, which could also increase its budget of 1.2 million euros, but finally, the movement has not occurred. Everything was at the expense of the will of the construction company Murias, who has seen how in recent months, some of the real estate projects that he was considering have not been carried out, so after the meeting between Odriozola and Paulino Barrenetxea, the sponsor, the dissolution of the team has been decided, in which all runners are free, including Mikel Iturria, winner of the Vuelta a España stage with an end in Urdax.

Some of them could join the Euskadi Foundation team, encouraged by Mikel Landa, who could announce in the coming weeks their access to the category in which the Euskadi Murias took part in the last five years.