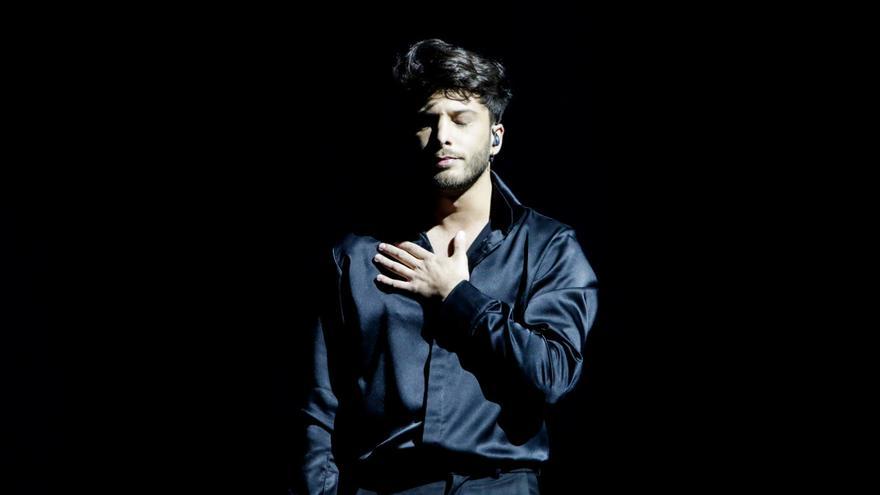 Blas Cantó has carried out this Thursday its first official test before the press as representative of Spain Eurovision 2021 with his song ‘I’m going to stay’, with a large luminous moon and the emotion of his voice as the main protagonists of his proposal.

Solved some technical problems that have interrupted the first attempt at performance, it was late this Thursday when the Murcian musician has become the last of the 39 candidates of this 65th edition to show his cards for the grand final of the 22nd of May.

Apparently in this first contact on stage at Ahoy Rotterdam, the city that is hosting the festival this year, Cantó and its set designer, the Dutchman Marvin Dietmann, have opted for a sober concept that places almost all the weight of the candidacy on the singer’s well-tuned voice.

Some of the elements that were already present when ‘I’m going to stay’ were chosen by RTVE viewers are kept, such as the gloomy lighting at the start, the fog along the track and the vocal start to “cappella”, now slightly longer. , as well as the scenographic resource of the eclipse projected behind him.

As a great novelty, in addition to changes in the musical arrangements of the song that have not been to everyone’s tasteIn the middle of its performance, the eclipse has given way to a large moon that begins to descend on the stage, with plays of lights in time with the music that bounce off its surface.

In rigorous black, Cantó wanted to leave more spaces within the song, as he anticipated in Madrid at his last press conference, and he has prolonged the last “me” of the chorus with which his song closes.

The singer has been vocally solid, even in the most delicate parts, such as the sharp sustain that serves as a climax before facing the final section of the cut.

In a press conference after the rehearsal, Cantó stressed that his presence in Rotterdam shows that “dreams come true” and assured that the rehearsal and his presence for the first time on a Eurovision stage were a “very emotional” moment. , in which he felt “very good.”

“The dream started when I was a child. (…). It’s like he’s still in the dream. I think that when we do our performance (in the Eurovision final), the circle will be closed. This is like a fairy tale, ”he added.

He sang, who was moved several times during his conversation with journalists in Rotterdam, assured that “it is not easy for him to sing this story, it is very difficult” and he acknowledged that, if he thinks “too much about the story behind the song, he could be crying all the time “and that is why he prefers” to think about the people who are still among us. ”

“I do not want to cry on stage because this is the time of my life,” he said.

After the previous days of rehearsals focused on the semifinals, this Thursday afternoon has been expressly dedicated to the first tests of the countries directly classified for the final, that is, the host (Netherlands), and the components of the so-called ‘Big 5 ‘(France, Germany, Italy, United Kingdom and Spain).

Who is Manu Ríos, the new signing of ‘Elite’ that will shake the relationship of Omar and Ander