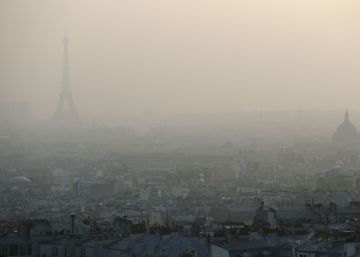 Europe tries to wake up from lethargy in the battle against global warming thanks to a mobilization of resources never seen before. The European Commission is already running its New green deal. The European Investment Bank will focus on financing green projects. Christine Lagarde is determined that under its tutelage the ECB includes environmental criteria in debt purchases. And the Eurocamara, which last week he declared the weather emergency, is always one step ahead in the demand for ambition in reducing polluting emissions.

The institutional and citizen atmosphere is seen to be conducive to a draft transformation, but throughout that chain Member States are the last and most relevant link. And if they do not accelerate the pace, the objectives set by the EU will remain on wet paper. This is what the report warns The environment in Europe. State and perspectives 2020, published this Wednesday by the European Environment Agency (EEA). "The pace of current progress will not be sufficient to meet the climate and energy objectives for 2030 and 2050," concludes the text. For the first date, the EU envisages a reduction in greenhouse gas emissions of at least 40% compared to 1990, and between 80% and 95% on that same threshold by mid-century.

The EEA assessment sees the light every five years, and its 499 pages are a compass to find out where the Twenty-Eight are on the road. The section on climate change begins with a message addressed to skeptics and deniers: "Climate change is happening. Variables such as temperature and sea level rise have broken records in recent years. Climate change has caused a substantial increase in extreme phenomena such as heat waves, torrential rains, floods and droughts in many regions of Europe, "he warns.

Specialists recognize in the report that the EU has reduced greenhouse gas emissions by 22% between 1990 and 2017, and the share of renewable energy over the total amounted to 17.5% that same year. They consider it the fruit of a greater political will around the climate, the improvement of energy efficiency or the transition from coal to gas, but also the result of exogenous factors such as an economic environment weighed down for years by the recession, which reduces activity and Therefore, energy consumption, milder winters that involve less expense to heat homes or the transition from an industrial economy to another focused on services.

The good news becomes negative when talking about transport and agriculture, where harmful emissions are on the rise. "The transport sector remains one of the key challenges to decarbonize the economy," the document said. Fossil fuels –coal, oil and gas— they account for almost 80% of all greenhouse gases sent to the atmosphere, but their close link with the economy complicates leaving the vicious circle. "The greater the contribution of renewables, the easier it will be to break ties between economic growth, demand for energy and emissions," estimates the EU agency.

The reluctance to change also falls within their forecasts. "It is likely that the radical modification of production and consumption systems disrupts investments, employment, behaviors and values, causing resistance from affected industries, regions or consumers," they admit.

Although climate change affects everyone, burden sharing can be uneven. The executive director of the EEA, Hans Bruyninckx, identify two opposing actors by pulling each one end of the rope. On the one hand, the potential losers of the ecological transition, mostly nestled in the east of the continentThey have already shown their opposition if there is no juicy reconversion fund that compensates them for the transition to a fossil fuel-free economy. To the other, the youth of the Greta generation, restless about the progressive deterioration of the planet, have demanded urgent measures in numerous mobilizations. "If we fail to change current trends over the next decade, the sense of fear that the future arouses in them is grounded," says Bruyninckx, hopeful with the change in direction taken by Europe, but cautious at the same time. "One thing is to change the way of thinking and another realize a real change. "

The worst case scenario would be materialized in phenomena that would directly hit citizens, who have already expressed their concern by placing climate change as the main priority of the European Parliament in the last Eurobarometer. "It is likely that the acceleration of change climate causes increased risks, particularly for vulnerable groups. The impacts may come from heat waves, forest fires, floods and changing patterns in the prevalence of infectious diseases, "the report said.

Technology is one of the ways to avoid it. Therefore, the EEA calls on governments to devote public resources to support experimentation and innovation, and to put means to encourage private investment. According to his calculations, around 75% of the terrestrial environment and 40% of the sailor are seriously altered. "The Earth is experiencing an exceptionally rapid loss of biodiversity, and the number of endangered species today is greater than at any time in the history of mankind. In fact, there is evidence that the sixth mass extinction is ongoing of biodiversity, "they warn.