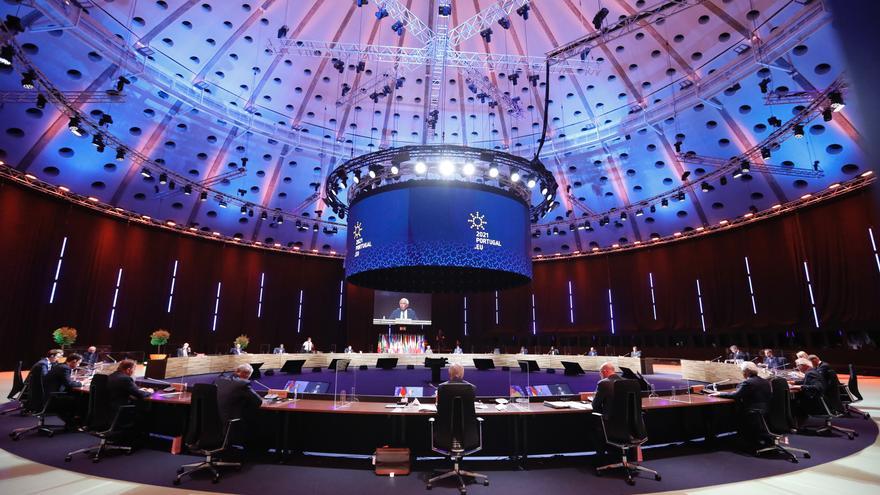 It is often criticized that the European social pillar is more declarative than binding. Especially if you look back at the management of the previous economic crisis to the dictation of cuts in social rights, public services and sacrifices from which economies such as the Spanish or the Greek had not yet recovered before the arrival of the pandemic .

But with the pandemic, fiscal rules were suspended, those that do force deficit and debt figures, on pain of receiving punishments, but not those of unemployment, investment in public services or education, as well as the persecution of unfair competition by way of taxes carried out by some countries, such as the Netherlands, Luxembourg or Ireland.

This Friday in Porto the Heads of State and Government have met, together with social representatives, to sign a declarationn. Indeed, it is not binding, but it does state a commitment to advance in that social pillar that often pales in the face of the Stability and Growth Pact, now deactivated but is expected by 2023 with the hammer of structural adjustments – that is, cuts to balance the macroeconomic accounts.

And in that declaration, the leaders of the EU, on the eve of the evaluation of the recovery plans to receive the 750,000 million of European funds, are committed to “joining forces around an inclusive, sustainable and fair process, and a job-rich recovery, based on a competitive economy and leaving no one behind. ”

“We are living in unprecedented times,” says the statement: “Our shared ambition for a transition to a green, socially just and digital economy will shape the livelihoods of people across Europe for decades to come. COVID-19 puts pressure on our health systems and has exposed Europe to more far-reaching changes in our jobs, education, economy, welfare systems and social life, causing a deep economic and social crisis. ”

The statement affirms that “with the increase in unemployment and inequalities due to the pandemic, it is important to channel resources where they are most needed to strengthen our economies and focus our political efforts on equal opportunities, access to quality services, creation of quality employment, entrepreneurship, and the reduction of poverty and exclusion “.

Thus, the partners have adhered to the three main objectives for 2030 established in the Action Plan of the European Pillar of Social Rights of the Commission in a joint Social Commitment of Porto: at least 78% of people aged 20 to 64 years they should be employed; at least 60% of all adults must participate in training activities each year; the number of people at risk of poverty or social exclusion should be reduced by at least 15 million, including at least 5 million children.

In addition, the leaders pledge to “promote gender equality, closing the pay gap and guaranteeing the right to equal pay for work of equal value.”

Likewise, the document calls for “mobilizing all the necessary resources (investments and reforms) to overcome the economic and social crisis, improve Europe’s resilience to future crises and strengthen the competitiveness of the European economy, based on sustainable and inclusive growth. , decent work and social justice, and with special attention to the environmental, digital and technological empowerment of workers, companies and institutions, with an emphasis on small and medium-sized enterprises and services of general interest “.

In the same way, it is called to “take measures to improve the functioning of labor markets so that they contribute to sustainable economic growth, international competitiveness, promote decent working conditions and fair wages for all, and promote the integration of women, young people and vulnerable people in the labor market “.

Along these lines, the President of the Spanish Government, Pedro Sánchez, has indicated: “Winning sectors of the digital transformation that are expelling the workforce while they are earning six-figure salaries and increasing their benefits and bonuses. I do not think this is acceptable , and I think that from the political dimension we also need to give a forceful answer “.

Something similar has expressed this Friday the third vice president and Minister of Labor, Yolanda Díaz.

In the same way, the president of the European Parliament, David Sassoli, has asked to follow the expansive example of the US government and called for the reform of the Stability Pact, which fundamentally monitors fiscal magnitudes. The reform is planned, but it has not yet been announced whether it will be done before or after it re-enters into force after the activation of the escape clause by the European Commission.

The President of the European Commission, Ursula von der Leyen, has highlighted the “three basic objectives for 2030 to create jobs, better jobs, good jobs, jobs prepared for the future. And one part is, of course, investment through NextGenerationEU: investment and reforms. But of course, a lot depends on our employers and unions, present today. The target is at least 78% of EU adults in employment by 2030. At least 60% of all adults who participate in training activities every year. Here we need employers, trade unions, organizations and civil society. But, of course, also the infrastructure of the Heads of State or Government, or of the Member States, flanked by cohesion funds and European social funds. And, the third objective, to reduce the number of people at risk of poverty by at least 15 million, including at least 5 million children. ”

Of course, in his speech, Von der Leyen interpreted the famous quote from Lampdusa’s El Gatopardo the other way around, which was a denunciation of the rearrangement of the elites to stay in power. “The world is changing and we too will have to change”, said the president of the European Commission: “To put it like the great Giuseppe Tomasi di Lampedusa, in Il Gattopardo: ‘Everything has to change if everything must remain the same.’ We have to act on climate change. We want Europe to be a pioneer in the digital age. But we also want Europe’s social promise to be full of life. We are here to build a social Europe that adapts to today. ”