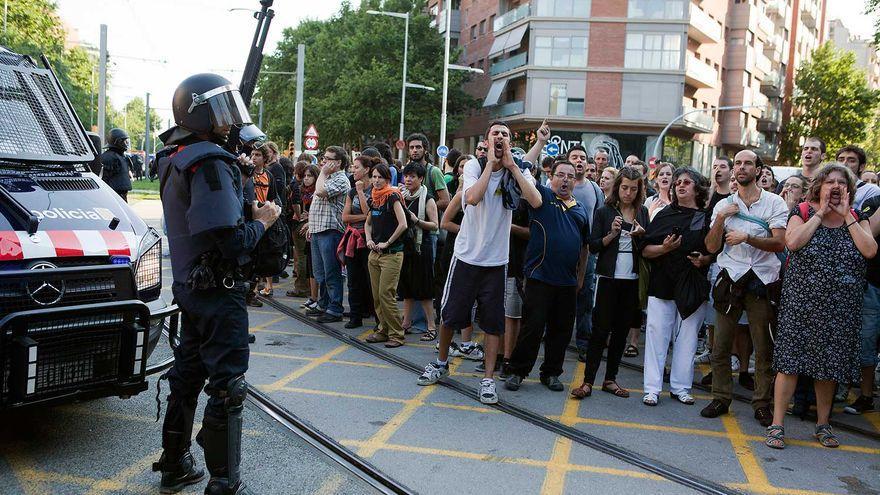 The European Court of Human Rights (ECHR) has ruled for the first time this Thursday on the petitions for protection of those convicted of the protest ‘Aturem el Parlament’. The response of the Strasbourg-based court has been contrary to the interests of those convicted. The European judges overturn the first request for protection in this case, which generated a deep political and legal controversy, concluding that one of the convicted women did not exhaust the internal remedies in Spain, something essential to go to the European instance.

He Supreme Court annulled in 2015 the judgment of the National Court that he had acquitted the defendants from the protest around the Parliament and sentenced eight of them to three years in prison for a crime against the high institutions of the State. The magistrates did not contradict the proven facts of the first sentence, but they considered that the National High Court made a “patent error” in prioritizing the protesters ‘right to protest to the deputies’ right to political participation to attend the Chamber.

In his sentence, the president of the Criminal Chamber of the Supreme Court, Manuel Marchena, addressed the appeals of the Prosecutor’s Office and the Parliament of Catalonia and the Generalitat, then commanded by Convergència under the Government of Artur Mas, and revoked the acquittal that had been decreed by the National Court in a sentence of which Judge Ramón Sáez was the rapporteur.

All those convicted appealed for protection to the Constitutional Court in 2016. The court of guarantees admitted the appeals of five convicted by the Supreme Court, which are still pending resolution. On the other hand, it did not admit another three resources from the beginning, which left the doors open for these three convicts to take their case to Strasbourg. This Wednesday’s ruling is the first of the appeals that were presented to the European Justice.

The ECHR points to formal errors in the appeal made in Spain as the reason for rejecting the petition for protection of the convicted person. The European judges point out that the convicted woman did not sufficiently justify “the special constitutional importance” of her appeal, one of the requirements of the Organic Law of the Constitutional Court for the court of guarantees to study the appeals for protection.

For the ECHR, this formal error amounts to not exhausting the remedies in the State and, therefore, it refuses to rule on the case. The plaintiff, argue the European magistrates, “does not allege that it was unable to comply with the formal conditions required for the presentation of its appeal and limited itself to discussing the admissibility rates of the constitutional court’s amparo remedies without other explanations.”

In sum, the ECHR recalls the requirement to exhaust the domestic remedy to be able to admit an amparo petition not only implies presenting the pertinent appeals before the state courts, but doing so correctly both in terms of “terms, forms and merits”. This is what the convicted person did not comply with, at the discretion of the ECHR, by not specifying the reasons of “constitutional importance” in her appeal to the Constitutional Court that were worth the admission of her appeal, and which consequently closes the doors of European Justice.

The plaintiff’s lawyer, Benet Salellas, has regretted the decision of the European court. “Not entering the fund by the ECHR is to orphan fundamental rights,” said Salellas, who has shown his “disappointment” with the court’s ruling. “Leaving the protection of fundamental rights in whether the Constitutional has entered or not in the background gives a power to the Constitutional that empties the ECHR of functions,” he added. In turn, he has considered the ECHR ruling a “warning to sailors” for future lawsuits on the process.