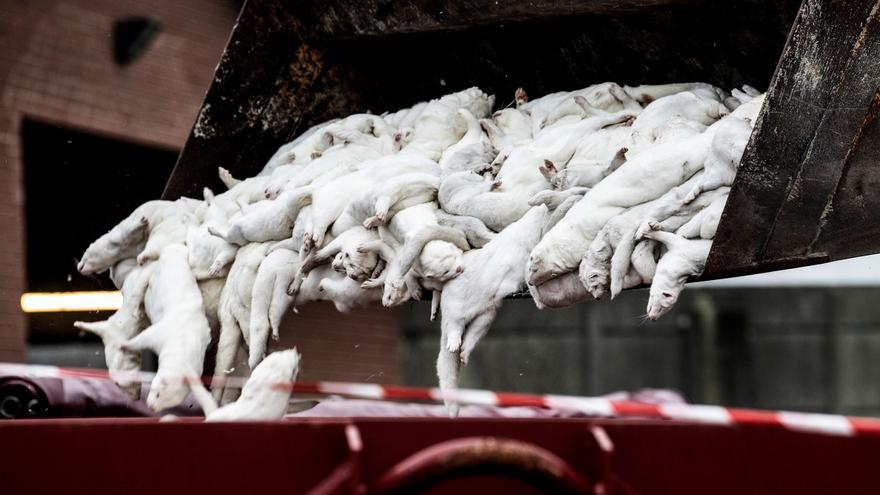 The European Center for Disease Control (ECDC) recommends that mink and fur farm workers be tested for the virus that causes COVID-19 after positive cases detected in Denmark showing varieties of the pathogen related to these animals.

The SARSCOV-2 mutation identified in mink has been found in 214 people. This mutation is suspected to weaken the formation of antibodies that fight infection. “The infection among mink farms is increasing in number and geographical extension, without preventive measures having worked,” admitted the Statens Serum Institut, the Danish reference center for infectious diseases, on 6 November, 24 hours after meeting the first cases. The Nordic country then sent slaughter some 17 million minks that are raised on more than a thousand farms.

Spain is concerned by this problem: it is still one of the production points of the fur industry in the European Union where some 750,000 minks are raised on 37 farms, according to data compiled by the WWF organization. In fact, in mid-July, some 97,000 minks from a farm in Aragon had to be slaughtered after some specimens tested positive for coronavirus. The wife of one of the workers and six other workers contracted the disease. Most of the Spanish farms are in Galicia, although there are also farms in Castilla y León, the Valencian Community and the aforementioned Aragon.

Spain has remained as a pole of production for the fur employers’ association in the face of the list of states that have been rejecting this type of exploitation: Austria and Great Britain have prohibited fur farms for more than a decade. Other countries that have joined the legal eradication have been Croatia, Slovenia and Bosnia-Herzegovina once their transitional periods have been completed for the bans to be effective. Even the Netherlands, which has been the world’s second largest producer, will close its farms in 2024. This trend was also joined by Macedonia or the Belgian region of Wallonia. Several federal states of Germany also do not allow these farms.

They accumulate variants that can jump to people

Now, the EDC admits that the transmission of the virus to people and vice versa “poses a danger to public health.” The possibility that humans infect minks means that the pathogen can then spread among animals due to the living conditions of mustelids (many specimens and very close together in production centers) and “their own biological characteristics”. In fact, an investigation last April showed that this virus reproduces quite well in ferrets that are from the mustelid family such as minks.

This pattern makes it easier for the virus mutations that occur as it replicates to accumulate. Since SARS-CoV-2 has the ability to jump back into people, those mutations can reach humans. This is what is estimated to have happened in Denmark.

“If these variants of the virus spread among the population, they could affect the effectiveness of vaccines now under development,” says the Center, adding: “Minks could become a reservoir of the virus where problematic variants of SARSCOV-2 would develop” .

So, as there is still great uncertainty about this phenomenon, the ECDC asks the European national authorities to “implement measures aimed at farms, workers and the areas where they are located.” In addition to the tests on animals and people, it demands that “the antigenic characteristics of the virus be sequenced” that measures are put in place to prevent infection of people and prevent the leap of the disease from animals to humans and development of a preparation plan ”.