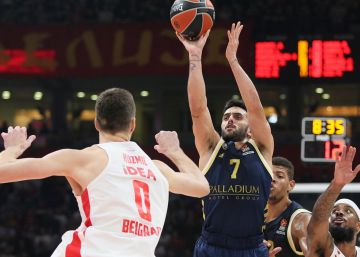 He Real Madrid He knew how to resist in Belgrade and ended up giving up the Red Star with solvency (60-75) to achieve his first victory away from home in the Euroleague. Those of Laso reached the last quarter below on the scoreboard and with a calamitous 3 of 22 in triples, but unleashed in the last 10 minutes with a partial of 8-26, they amended the statistics in a big way from 6.75 ( 7 of 9 on that stretch) and they embraced a revitalized Tavares (11 points, 9 rebounds and five blocks in 30 minutes on the track) to put their European counter positive again (four wins and three losses). Llull and Rudy seconded the Cape Verdean center and cut off the remarkable game of Baron and Brown. On the Tenth stage, Madrid came out triumphant again.

Real Madrid players appeared in Belgrade with much more attitude than success. Laso took time to value their voluntarism weighed down by their blur in the perimeter (1 of 9 triples in the first quarter) that marked a trend, but they held on to their firmness and made their way through the thicket. The Madrid plan consisted of reuniting Campazzo with Llull as a double engine and stretching the renewed influence of Tavares (12 consecutive minutes on the track). After weeks unsettled, the Cape Verdean pivot appeared decisive against Alba Berlin last day and, taking advantage of his reprisal, Laso used him as the axis of operations.

With the gigantic reference of Tavares and the energy reinforcement of Garuba, Madrid increased its piggy bank to 10 points in the middle of the second quarter (12-22, m. 14). But, between the respite of complacency and the imbalances of the rotation, those of Laso granted a partial of 7-0 in three minutes that lowered their stretch. On Gavrilovic's slate, the Brown-Baron-Gist shortlist proved to be essential for his own, monopolizing production and minutes. On the Madrid side, however, the repertoire was diversifying. Laprovittola escaped his European ostracism with a good relief before the break and Mickey sustained the struggle in painting.

In the systole and diastole before the trip to changing rooms, Madrid again stretched the rope with Rudy's first triple (22-31, m. 19). And Laso's set minimized his poor 3 of 15 in triples with concentration (only three losses in the first half), defense and voracity, in rebounds, steals and blocks.

Carroll left to find the triple switch, but the fourth Tavares plug came earlier than the fourth Madrid triple. Madrid scored at a good pace on that stretch with Campazzo and Carroll himself approaching the ring, but the Red Star replied with an effervescent Baron and the episodic appearances of Dobric and Simanic (two consecutive three-pointers of a promising 2.09m of 21 years) . And, from the exchange of blows, it was a third quarter unleashed and a matched marker (45-45, m. 26).

Obfuscated since 6.75, Madrid was distracted in that stretch of its defensive obligations. The Madrid dyke, which had only conceded 27 points in the first half, fit 25 only in the third quarter. The Stark Arena woke up and the Red Star entered the finish line ahead. The 3 of 22 in triples went from being a quagmire to being a hole (52-49, m. 30).

Rudy placed 52 times the draw at 52 as he finds oil, Causeur linked another one to momentarily break the thicket and Llull added the third to unleash Madrid's optimism after the 0-9 partial (52-58, m. 34). The streak did not stop there. Rudy scored a triple more and with the aim forward the rigor also reappeared. In the absence of four minutes, Tavares returned to the track to protect his own hoop and hammer the opposite. And, with the intimidation of the Cape Verdean and the experience of Llull and Rudy, Madrid grabbed their first home victory in the Euroleague to return their counter to positive their counter: four wins and three losses in seven days.