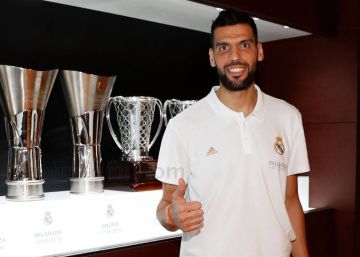 Salah Mejri returns to Real Madrid basketball. The 33-year-old Tunisian center, 2.17m, who played in the white club between 2013 and 2015, will underpin the internal rotation of Pablo Laso's team after passing through the NBA and the Chinese League. In a meteoric race, which started professionally at almost 20 years old, Mejri had enough three seasons in the Endesa League to launch make the Americas in 2015 after two white courses. In the NBA he played 204 games with the Dallas Mavericks, in which he averaged 3.4 points and 4 rebounds per game in 12 minutes on average. In the last World Cup in China he led Tunisia and stood out in the statistics with 16.2 points, 10.2 rebounds and 25.2 valuation in 30.9 minutes on average. After the World Cup, he signed a temporary contract with the Chinese Liaoning Flying Leopards but the call from Madrid has brought him back to the ACB with a contract until the end of the current campaign. In his first white stage he won a Euroleague, a League, two Cups and two Super Cups. Laso already has double for Walter Tavares.

The Tunisian pivot was the first signing of Madrid for the 2013-2014 season and now becomes, after Laprovittola and Mickey, the third reinforcement for the ninth course of Laso. Mejri soccer player until the age of 18, finally gave up without much conviction to the pressures that encouraged him to try in the world of the basket. After averaging 5.1 points and 4.9 rebounds in the Afrobasket of Libya in 2009 and leading Tunisia in the conquest of Afrobasket in 2011 in Antananarivo (Madagascar), where he was designated MVP (second maximum rebounder: 9 per game, and 2 , 4 caps), made the jump to Europe.

Between 2010 and 2012 he played in the modest Belgian League (in the Antwerp Giants, where he averaged 9.2 points, 7.8 rebounds and 2.5 blocks per game in the regular League and 7.3 points, 7.2 rebounds and 1 , 8 caps in the Eurochallenge). But Mejri took enough careers, played the London Olympics with the Tunisian national team, managing to be the top capper, with an average of 3.4 per game and second rebounder of the tournament (10 per game) and, after participating in the Summer Orlando League with the Utah Jazz, Obradoiro opted for him throwing him to the ACB showcase. He did not miss it. One year was enough to reach a great and wear white.

The Tunisian, a fan of Real Madrid football and Figo from a young age returns to the white club four years later. He arrived for the first time in 2013 with the Revelation Player cockade after completing several relumbron matches in the remarkable season of Obradoiro, a meritorious quarterfinalist on that occasion against Real Madrid himself. He averaged 9.4 points, 5.3 rebounds, 1.6 blocks and 11.1 valuation in 20 minutes on average per game. The League champion relies again on his mobility and his intimidating ability to which he has added a greater range of shooting with outside threat to double Tavares.

Vicente Moreno: “When you don’t do things right, Real can make you a suit”

Kobe Bryant has died in a helicopter crash, according to TMZ