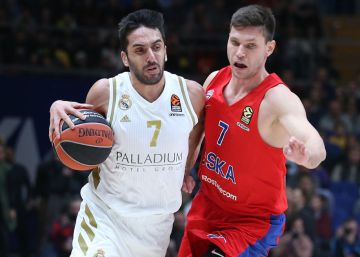 There is no greater Comanche territory for Real Madrid de Laso than the CSKA court. In a match that turned out to be an ode to the thicket, by trapped and erratic, the whites signed their worst score of the season and saw their streak of 13 consecutive wins in the Euroleague stopped. Mike James and Darrun Hilliard monopolized the few points that were distributed in Moscow, where 32 losses were seen between both teams, 16 by side, and squalid shooting percentages: 5 of 20 in triples for the reds and 19 of 61 in field shots For Real Madrid Laso’s team, which in the first quarter scored 21 points, was only able to score 34 more in the remaining 30 minutes. Another white record was frozen in Russia.

On January 23, 2014, Messina’s CSKA defeated a Madrid of showtime which was presented in Moscow with a sequence of 13 consecutive wins in Europe within a total run of 31 unbeaten games at the beginning of that season. History was repeated this time and Laso’s set record was interrupted again in his damn track. Whites have not won there since 2008, at the time of Joan Plaza, with Bullock, Felipe, Mumbrú and Hervelle in front. It’s been 12 years without finding the way to escape alive on the roller coaster.

Madrid appeared without complexes at the Megasport Arena in Moscow despite the precedents. To face the assault on the only Euroleague court in which he had never won, Laso grabbed the effervescent state of form of Thompkins, and the American responded with 9 points in the first 10 minutes of the match, but did not set a trend . With the success of the pivot, an applied defense, the solvent management of Campazzo and the productive reappearance of Deck, after his injury in the classic of the end of the year, the whites far exceeded those of Itoudis in the staging. The CSKA crashed before the rival ring and closed the first quarter with a 5 of 16 in field shots that allowed the visiting run. It was short and ended in a quagmire of just 55 points for a team accustomed to moving in the 90s on average.

By then, the Real Madrid captains were already back. After 51 days off due to a muscular problem with relapse included, Llull returned in a fang duel, with Mike James as a dance partner, but with Laprovittola coverage as a base. It was not his day (0 of four in the shot, two rebounds and an assist in 15 minutes). Felipe Reyes also joined the cause, who in Europe had barely played four minutes against Zalgiris on the third day and was an episodic protagonist of Madrid’s first demarrage with a triple that raised his income to +12 (14- 26, m. 12). The basket allowed Felipe to beat another personal record by exceeding 3,000 points in the Euroleague. Laso still lacked decisive pieces like Randolph and Rudy but, in front, the CSKA also added to the casualty list, in addition to Clyburn, Hackett and Strelnieks. Only Kurbanov was at the height in a first half famished of the Russian team (5 of 20 in shots of two and 2 of 7 in triples).

However, the CSKA managed to compensate the fight for the rebound with the passing of the minutes and thus contained the Madrid flood. With the breaks of Campazzo, Thompkins and Tavares in the second quarter, Madrid lost punch and intimidation and, after a poor 12-12 in that quarter, the score remained 26-33, with better sensations for whites but also with a remarkable relief of the reds for staying hooked to the duel. “The attack has to accompany the defense and you have to stay focused,” Laso explained to the cameras at the entrance, without major reproach to his people. “We have to change everything,” Itoudis snapped. And, in the resumption, the protocol Muscovite reaction was mixed with the Madrid blackout.

Despite recovering his initial quintet, Madrid went deep into the thicket and, after more than five minutes without scoring, granted a 10-0 run until Thompkins rescued a two plus one first and a rebound lost after they resulted balsamic to stop the boiling moment of the red army. From 36-33 it was changed to 43-43 at the end of the third quarter after an exchange of triples between Campazzo and Hilliard. Some unprecedented figures at the height of the 30th minute. Those of Laso went from the 12 points of the second quarter to 10 of the third, added, one point more than those achieved at the start of the game. The biggest Madrid traffic jam of the season after the Palau.

While James collected the usual points for his file, Hines and Bolomboy saw the moment of becoming strong in the painting before the doubts of Madrid. Whites defended themselves with a triple of Mickey and another of Taylor, but the air was blowing in favor of CSKA. James reached 19 points and placed his own ahead of the moment of fear (55-52, 2m 23s). Thompkins’ triple made the tie but, with the intimidation of Tavares and a tray of Deck, the victory remained on the ledge: 55-54 at 1m 21s. James and Campazzo failed since 6.75, but Hilliard succeeded three times the resolution of the contest. Llull lost the ball of hope to Hines. The streak of 13 consecutive victories of Madrid froze in Moscow. On Thursday, before Khimki, second chapter of the white tour in Russia.

Recognition of the longest – La Provincia

Interview with Aitor Ariño before the European final: “The thing about extremes is to fly, observe and try to deceive the goalkeeper”