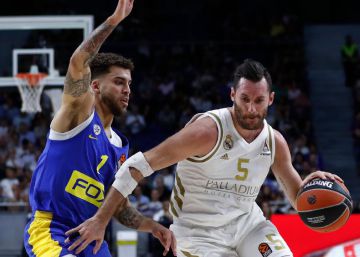 Jaycee Carroll won the oppositions to hero in an agonizing final against the Maccabi and gave Madrid his second victory in the Euroleague. The Wyoming escort, back after 11 days off, escaped all the blocks of the tough rival defense and rose gracefully to resolve, in the absence of two seconds, an intense and balanced match. The 14 points of the American gunner crowned with the triple of the sentence put in value almost on the horn the remarkable performance of Jordan Mickey (16 points, 11 rebounds and 30 of valuation), which was enlarged in the painting the day that the official Salah Mejri's return to the white club.

The Maccabi was presented at the WiZink Center with Scottie Wilbekin and Tarik Black as recognizable livelihood and with Tyler Dorsey, Elijah Bryant, Nate Wolters, Quincy Acy and Othello Hunter as a battery of solvent reinforcements to revitalize the Ioannis Sfairopoulos project, but without Omri Casspi . The former NBA, the most lustrous signing of Maccabees, caused last-minute leave due to stomach problems and lowered the potential of a growing team. The tenants of the Hand of Elijah, League champions in 41 of the 45 editions played between 1970 and 2014, spent a few years drifting but, once rebuilt their plenipotentiary domain in Israel with two consecutive alirones, they now seek to reedit the thriving apparitions in Europe of a historical club, the third in the medal winners equaled six crowns with the Panathinaikos. At the moment, two defeats in two complex starts away from his head. Panorama opposite to that of whites who remain undefeated at the beginning of the course (7-0).

Madrid took advantage of the prolegomena for present to the newcomer Mejri, who received the ovation of the parishioners of the Palace and lived the game next to the Madrid bench, next to Felipe Reyes (who will follow another week to two points of reaching 3,000 in the Euroleague), Thompkins and Nakic, who stayed out of the call for the duel against the Maccabi. Laso already has twice as many Tavares, to reinforce the internal competition and keep the drawing on the track in the absence of the Cape Verdean with another giant that replicates his influence in the painting. With the return of Mejri, 33 years old and 2.17m, Laso's workforce already reaches 16 pieces, seven of them pivots. An almost football repertoire that grows and mutates without losing the essence, identity and agonistic spirit when it plays.

The Maccabi began firm, with Wilbekin and Wolters hammering the Madrid ring, until the Campazzo raised its revolutions and activated the white machinery, lack of feeling in the staging. With three points, three assists, a steal, two fouls received and a couple of highlights In the first seven minutes, the Argentine base contained the initial onslaught of the Israeli team, which, however, took advantage of their trip to the bench to balance the first set (22-22, m. 10). It took a while for Llull to find the pulse, but Mickey (10 points and three rebounds in his first three minutes on the track) far exceeded the performance of Tavares and Laso began to find solutions to diversify their production. Bryant and Dorsey tried to stretch the Maccabi blanket which, with Carroll's points, began to fall short (43-34, m. 16). Madrid came to rest with a 7 of 12 in triples and dominating the rebound thanks to the eight catches of Mickey in that section. Arguments outside and inside to gradually impose their style.

However, the roadmap for the targets was disrupted. With the starting quintet on track, Madrid was delayed in the resumption and the Maccabi was punished with a 0-12 partial starring Dibartolomeo who returned the initiative to visitors (50-56, m. 23). Used to shake the matches in that space, Laso's team was troubled by the change of scenery. Randolph reacted with five consecutive points that hustled his own before the Israeli reengagement gained too much strength. Without a trace of the Taylor that emerged before Fenerbahçe or minutes for Laprovittola, Laso turned to Mickey again after making him rest for the entire third quarter (65-65, m. 30). Madrid rowed in a group to balance the successive Maccabi advantages, but Wilbekin extended the local quagmire already in the finish line. He tied the game Deck with two free throws (77-77 at 3m 15) and Campazzo and Rudy returned to the court to play the victory at the funambulo.

With a tie at 81, Facu missed a triple and Rudy was fouled on Wilbekin in the rebound. The Maccabi franchise player scored both free throws and placed his two up with 50 seconds left. Another triple of Rudy went to the iron, the rebound of Mickey with foul received was not a basket because he left from inside but, crying, the two free throws of the American returned to tie the contest (83-83, to 27s). Taylor lost the Wilbekin mark that escaped Rudy and scored a vaseline before Mickey's arms to leave Madrid two down with 10 seconds left. Llull climbed it and handed it to Carroll to triple the second victory of Madrid in the Euroleague in another film final at the Palace.