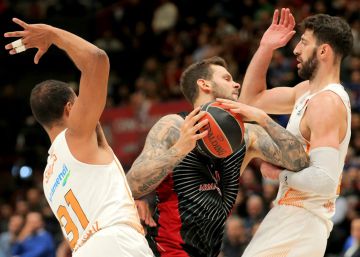 A stumble can turn a good afternoon into a disaster. The Baskonia was scalded from the Mediolanum. He lost because he could not get out of the black hole in which he got into the final minutes of the first part, after a key action for the game. He went to 7.36 to get to rest. Nik Stauskas responded with a triple that put Baskonia with nine points of difference (17-26), which Chacho Rodríguez had achieved in the opposite basket a few seconds earlier. However, in that play, the transcendent action was not the success of the Canadian bomber, but what happened next to the baskonista bench, where Pierria Henry circulated, who stepped on a wet area, just when his partner armed his arm to launch, and He sprained his right ankle.

He fell to the ground in bad posture and limped off the field, after a few good minutes, and left all responsibility for the other base, Luca Vildoza. From that moment until the end of the first part, the lights went out to the Baskonia, It was not the same team with ease that had appeared in the first bars. The comfortable advantages available to him vanished; defensive discipline was diluted, ideas in attack disappeared Milan changed the pace, approached until 23-26, and not even Perasovic's downtime managed to stop the collapse. The Italian team went to rest with advantage (40-34), and the feeling that things did not work. Shengelia, well defended, went into depression. The colossus of the previous nights could not turn on the long lights to illuminate his team. Vildoza, with all the responsibility on him, seemed overwhelmed. Only Stauskas and Fall, each in their task, seemed to endure the pull.

Things were the same at the beginning of the second part. Baskonia did not enter the triple that had given him an advantage in the first quarter and also began to lose balls in an indefatigable bleeding. Although Milan was the same with stubborn insistence, these advantages were not taken advantage of by the players of the Vitorian team. Henry returned, but it was not the same. Baskonista base lacked confidence. Milan extended its advantage, although with a partial 0-9, Baskonia approached to a point, and even had the possibility to get ahead. It was an optical illusion. Messina's team squeezed again and with 17 consecutive points, he left permanently in the light.

The Italian coach did not have to use his figures. Rodriguez's performance was not epic, as on other occasions; Scola spent many more minutes on the bench than on the court. It was enough for Milan to pull the bottom of the closet. Between Della Valle, Mack and Roll ripped the Baskonia, who only approached to make up on the scoreboard when the defeat was no longer remedy.

Asdrúbal Padrón: “My ambition is to achieve the objective that escaped a year ago”