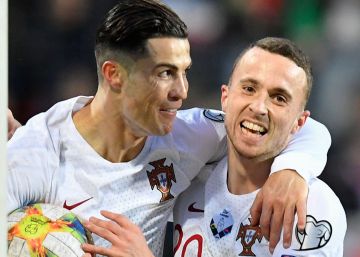 Portugal qualified for the European Championship in Luxembourg. But until the last leg of the game he exhibited all the problems that have made him a suffering team within the framework of Group B. Mainly, a surprising difficulty in controlling the ball, considering the technical wealth of his cast. The staff of Fernando Santos is not lacking anything. The game he practices is missing many things, despite the fact that he is the current champion of the League of Nations and has won the right to defend the title he conquered so accidentally in France, in 2016.

On a raised and irregular field nobody finds it easy to play. Neither to Portugal, much less to Luxembourg, which hardly has professional-level footballers. I do not care. The local team had enough with the Thill brothers, two frills with enough class, to get the champion in trouble. As usual, the person in charge of removing his team from the quagmire was the feverish Bernardo Silva. A pass from the City midfielder in the 37th minute enabled Bruno Fernandes in the 0-1. Another pass from Silva served Jota 0-2 after a backlash well driven by Jota himself and Cristiano. They finished both. One on the goalkeeper on the second stick, the other to push the ball over the line. The referee awarded the goal to Cristiano.

The 0-2 relieved Portugal in the 86th minute. It took too long for the team to secure their second place in Group B. Luxembourg had a couple of chances to tie the game, and not by chance. Finally, Ukraine ranked first in the group with 20 points after drawing 2-2 in Serbia. Portugal followed with 17 points, three more than Serbia, which is alreadyHe aspires to playoff. Now the current champion becomes the first stumbling block of the draw series heads that will be held on November 30.

Valencia CF: Maxi Gmez is already an idol of Mestalla