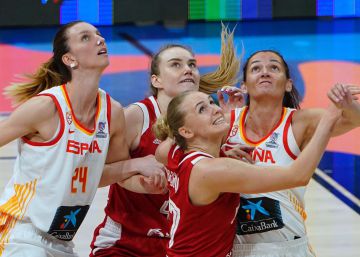 Spain won the Eurobasket semifinals and the ticket to the Tokyo 2020 Olympic Qualification after overwhelming Russia in one of its best matches of this winning cycle (78-54). Mondelo's team will meet the winner of Serbia-Sweden in search of his seventh consecutive medal in big tournaments after another exhibition of voracity on the key day of the championship. With Ndour (24 points and 12 rebounds) and Nicholls (11 points and 7 rebounds) back in front, the Spanish team was a marabunta of hunger, passion and talent in which the Russian army melted: 24 points of difference, 48 -35 in the rebound, 15 steals and 23 losses caused. Vadeeva, the rival coconut, stayed in six points with a 1 of 6 shots in the field and did not throw a basket in the second half.

From beginning to end Spain was a whirlwind that devoured the parquet in its path. He overwhelmed his rival based on intensity and agitation and subjected Vadeeva with a guild and selfless plan of defense aids that allowed him to get the rhythm of the game in a heartbeat (15-7, 7 m). Olaf Carsten was forced to review the lesson as soon as he started and Russia reacted momentarily by altering his script and betting on the one against one and the insights. But it was a mirage. With Ndour and Xargay taking charge of the quarterfinals and Laura Gil successfully handling the offensive rebound, the Mondelo team was recognized in its best version, put its match plan in value and took the Russian giants direct to the divan. They found no possible response to such a display of competitive passion.

Pending the tactical retouching to limit the influence of Vadeeva, sometimes with pressure others with zonal defenses, the Spanish coach worried on the eve of the attack. "We make a huge wear on defense to compensate for our lack of physique against rivals and that penalizes us in attack. It is not new, but in other years it was more disguised because Alba (Torrens) took out very complicated baskets in static attack and gave us many resources in the open, "Mondelo explained before facing Russia. "Winning with 60 points is very complicated. In addition to continuing to defend at a high level, we must reach 70 ", he said, marking the way and the figures.

Scoring at a good pace from the start and rescuing second options based on collecting rebounds, Spain fulfilled the purpose. He reached the 10th advantage before the trip to the locker room (35-25, 12th minute) and, without conceding truce, unleashed the storm while Russia attended, troubled by the rapid-fire and thrilling counterattacks of the European champions. They arrived a triple from Ouviña and two free throws from Abalde to underline the excellent contribution of the bench and, immediately afterwards, four consecutive points from Anna Cruz to throw the whole of Mondelo. The best version of Spain left the army of Vadeeva in 12 points in the second quarter and was launched on the scoreboard (44-25, 19).

Attacking from the defense, competing with a sublime mental strength and sharpening its essence, Spain again reduced the importance of the centimeters to put the character into play. Vadeeva closed the first 20 minutes with an eloquent 1 of 6 in field goals. No more shot to basket. The rebound, the statistics of hunger, reflected by then a 27-15 in favor of the Spanish team. Seven robberies and 10 provoked losses completed the exhibition. The Russians were only able to deliver three assists in the first among the Spanish defensive marabunta.

In the resumption did not slow down the Spanish. From 48-28 from minute 21 to 58-36 five later. With Vadeeva isolated and deranged, Xargay, Nicholls, Cruz and Ndour advanced in the conquest of the ticket for the pre-Olympic while Russia looked for shortcuts to try a reenganche to the desperate one. Between the end of the third quarter and the beginning of the last one, Carsten's side put together a 2-9 of part-time, but there again appeared the connection that has concreted to Spain during the championship. A triple from Ndour and another three points from Nicholls recovered the 20 income for Spain and ended up surrendering to Russia. Nicholls' own injury to the left ankle less than a minute from the end was the only bad news of the game.