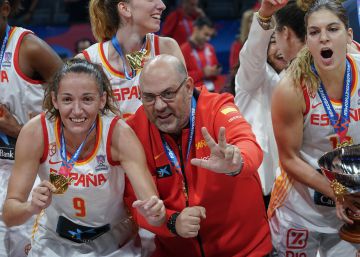 So far this century, the women's basketball team has already climbed 13 times to the podium: nine in the last 10 Europeans, one in Games and three in World Cups. Only Russia, with 10 metals in the same stretch, holds, increasingly from afar, a sequence in which Spain wins by competitive strength. The heirs of the USSR (which won 21 of the first 23 European Championships between 1938 and 1991) fell off the World podium in 2006, the Olympic in 2008 and the continental in 2011, will not be in Tokyo 2020 either. Nor France (eight medals since 2001), already resists comparison. No European country holds the pace of Spain, second in the world ranking just behind the Martians from the USA

"Of the party I am not going to explain anything", released Lucas Mondelo to begin his press conference. "We have suffered so much this year, from the World Cup to here, that the final has been a liberation. In Tenerife we ​​had many injuries and a lot of pressure, but we knew how to take everything forward with much suffering. But we drag it all season. We could not recover well from all that. In addition, we started the concentration without Alba (Torrens) and the weight was accumulating. But we were ourselves again and, as in 2017, we played semifinals since the quarterfinals ", developed the coach in his review of the process that led to the Belgrade gold, the seventh consecutive medal of this group. "I've been with them for many years but they never cease to amaze me. I want to thank all my technical staff because there is a lot of work behind to be at the height of these artists, "said Mondelo.

Before the triumph in the Eurobasket of 2013, where it was installed in glory, Spain was the fourth continental power and the sixth world in absolute category in the official ranking of the FIBA ​​of women's teams. But even then, it was the second world power in training categories, only behind the US. The natural evolution of the success from the quarry has meant that, in this decade, the Spanish players lead without discussion the European list.

"We continue making history. Winning this final by 20 did not fit into the plans and the way of playing has been incredible. We have enjoyed a lot, "added Silvia Domínguez. "Another challenge overcome. I do not know what will be next. I do not know what else we can do, "said the base of Perfumerías Avenida, which cost more to cost the network as a symbolic trophy than surrender to France. "We started the match very early and we became very strong. After all the suffering before Serbia we are liberated. Everything has entered us and we have been very concentrated as always in defense ", completed Domínguez while the champions were run over in the corridor of attention to the media.

Next to her, Astou Ndour, with her eyes still glassy. "I'm dreaming. This team is a pride and this gold puts in value the great work that we have been doing for years. The mvp I was very excited, "said the statistic leader of Spain in the championship, with 14.8 points, 8.2 rebounds and 18.3 average rating in the six games, all resolved with victory. For the first time since 2013 precisely, Spain completes the tournament with full of triumphs. "This team hates losing," returned Mondelo. "The rivals every time know us better, but it only helps them to lose for less," he joked in his usual mocking tone. "This is sport and this cycle will end at some point, but we are stretching it in an incredible way. We are prepared for any adversity. Maybe if we did not suffer so much we would not achieve everything we achieved ", crowned Laia Palau.