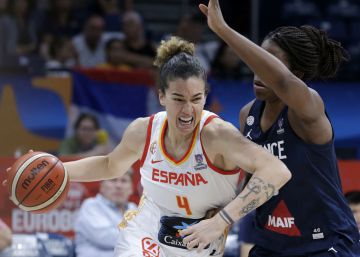 By dint of expanding their limits they stopped believing in impossible. The women's basketball team was proclaimed in Belgrade European champion for the fourth time in its history after returning to France, as in the previous three, for talent and mentality. For the Spanish players the final was a prize after surviving the Serbian hell in the semifinals; for France a revalidation for having stayed three times in a row on the second step of the podium and measuring herself against her indelible demon. Triunfo a Spain of pure gold, a legend group that in this tournament has won the passport to eternity with its seventh consecutive medal between Europe, World and Games. No team had managed to link two crowns in the last 28 years, since the empire of the USSR fell in 1991 after 17 titles. The whole of Mondelo did it, after an exhibition of game and tuning led by Marta Xargay (23 points) and seconded by the mvp Astou Ndour and the rest of her companions. The revolution was not French this time either.

Four continental golds, the four against the French team, mark the last 26 years of the national team. The first, in 1993, when the pioneers of all this overcame the disappointment of staying at the gates of the Olympic podium in Barcelona and stretched their competitive perseverance to embrace the title in the Eurobasket of Perugia, an unprecedented glory until then, the first gold of all Spanish basketball, the first medal of women. The trip to a Moon It took 20 years to get back on track.

In 2013, after silencing the Marseillaise at the Pévèle Arena in Orchies with a vibrant and proud basketball, Spain returned to bathe in gold at the farewell of the illustrious Amaya Valdemoro and Elisa Aguilar, who dismantled at the top of the podium after almost two decades pulling the car. By then, the army of Pacho Villa, as Amaya called the team kamikaze At the beginning of the century, when he began to hunt bronzes, leaving his soul, he had already become the voracious battalion of cojonera flies, as Elisa called the irreducible spirit of an increasingly winning group that was about to jump to another dimension.

With the courage of always and more talent than ever, with the incorporation of a differential value like Sancho Lyttle to reach world podiums, with the burgeoning later appearance of Astou Ndour, with the luminous and procacious potion of Lucas Mondelo and with the best litter of players of the history of Spain came excellence, as long as brilliant. The nucleus composed by Laia Palau, Laura Nicholls, Silvia Dominguez, Marta Xargay, Laura Gil and, the now absent, Alba Torrens has built an empire, without realizing or importance, assaulting all the skies without the airs of stars.

Thus, with a happy group, an emotional basketball and a non-negotiable intensity, came the third gold, in the Eurobasket of 2017. In Prague, Mondelo's players, self-sacrificing, supportive and brave, melted again a more robust rival based from the heart A heart of pure gold, with Alba Torrens as a stiletto and Sancho Lyttle as a pillar. Neither of the two mvps I was in Belgrade, but the resources, the talent and, above all, the capacity for sacrifice remains infinite. France succumbed again to the Spanish marabunta, which went from surviving to overwhelming.

It was the third Spain-France final in the last four Europeans. In Garnier's list only two players repeated with respect to the duel of 2013 (Myem and Gruda); in Mondelo's, six. And, with the same core and the same plan, the selection was again impressive in the fight for gold. Three three-pointers by Marta Xargay in just two minutes, four points from Laia Palau, another four from Nicholls and a partial output of 17-8 that became a 32-21 at the end of the first quarter. France still did not know, but he had already lost the final, his fourth consecutive.

He began rowing alone Gruda, but, years later, France confirmed that he still could not find the kryptonite for Spain and without reading the Lazarillo de Tormes. Laia Palau and Silvia Domínguez imposed their pirouette against Epoupa and began to apply the roller (46-29, m.17). The purpose of the Gallic amendment was to toughen up the defense, but even with that, Mondelo's team did not go to rest with 50 points (7 of 15 in triples), dominating the rebound and managing the times, equaling the best score in the game. first half in a women's Eurobasket. There was no more end, a Spain for eternity had devoured her in 20 minutes. A roller of passion. A team of pure gold.