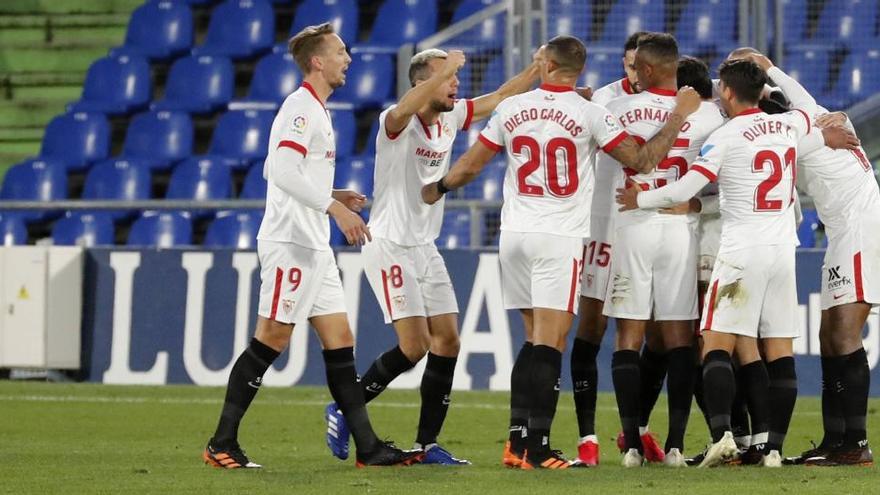 The Seville returned to the path of victory in The league Santander by overcoming by 0-1 to Getafe with an own goal by Xabier Etxeita, which symbolized the crash of the azulón team after accumulating seven games without winning.

In a meeting to forget about both teams, with almost no chances, blunt, gray and excessively tactical, only an unfortunate action by Etxeita in the last minutes gave Sevilla the three points, which gained momentum in qualifying to settle in the European zone.

Resolved this week against Rennes their streak of two games without winning, Sevilla appeared at the Coliseum Alfonso Pérez with the need to add three points to return to the path of victory in LaLiga. He Real Madrid Last day he closed his series of good results and could not fail to get close to the top of the table.

I had it difficult. In front, Getafe was in great need. Almost more than ever since José Bordalás took office, who for the first time saw his team looming over the bottom of the First Division. After chaining six games without victories, they had gone from the European euphoria to the rush to get away from relegation.

In full depression, the Azulón coach opted to take a step back. Accustomed to trying a suffocating pressure from the front lines to recover and surprise, he ordered his players to wait crouched in their field well enclosed and without leaving gaps to end the number of goals conceded in their last games.

Given this approach, Sevilla hit a wall again and again. Although Lopetegui returned to a more league eleven with the return of the Brazilian Fernando, the Argentine Lucas Ocampos, Joan Jordán, Aleix Vidal and with the return to an eleven of Marcos Acuña after overcoming an injury, he was never able to cross all the lines from Getafe in the first half.

He only got it once. It was a set piece, at 19 minutes with a free kick by Jordan from far away and hit hard on the crossbar of the goal defended by David Soria. He did not fire again between the three sticks. For Getafe, their defensive system worked well, although it was difficult to never get close to the domain of Moroccan Yassine Bono.

Going through the changing rooms changed the style of the game little, which remained flat, gray and with the same approaches: control of Sevilla and closure of Getafe waiting for an isolated goal to continue in the cage until achieving three points.

Among the thicket only the figure of the Uruguayan Mauro Arambarri emerged, the only animator of boredom with a distant shot that Bono stopped without problems and with two robberies in the center of the field that ended up in galloping paths to the Sevilla area that came to nothing for very little.

That was the only thing that happened until the last leg of the crash. With the physique worn out on both sides, the last cartridges were spent. Sevilla used them on a header by En-Nesyri and Getafe on a David Timor foul that was miraculously saved by Jules Koundé.

The French defender, located in the barrier, abandoned it at the last moment to position himself on the line of his goal. The ball appeared right in place and saved a sung goal. There was nothing else except the unfortunate action that gave Sevilla the points.

With just nine minutes to go, Suso launched a seemingly innocent cross from the right wing and Etxeita, with a header worthy of a pure center forward, drove the ball into his goal. It was the end of Getafe, which, if it was already played, ended up sunk with that goal. Bordalás, definitely entered a crisis. Lopetegui, returned to smile in LaLiga.

Incidents: match corresponding to the thirteenth day of LaLiga Santander played without an audience at the Coliseum Alfonso Pérez in Getafe.