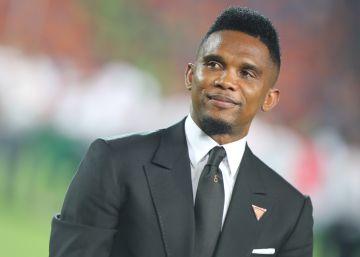 It was in his presentation as a new player of the Football Club Barcelona when Samuel Eto'o said what would run "Like a black to live like a white", a declaration of intent that brought together two of its most celebrated characteristics: commitment and excess. Because if of Ronaldinho it is always remembered that he returned the smile to a depressed club, from Eto'o it could well be said that Barça took his tongue and fang, so necessary when one tries to build a team but also a story. There is much talk about the pair that the Brazilian and the African consolidated on the field, little of which Eto'o and Joan Laporta himself built the cameras and microphones before: that was like putting Dean Martin and Tupac together on the same stage .

We will never know how much or how happy Samuel Eto'o was in Barcelona because his days passed before our eyes at the speed of lightning, which is the only one that knew the tip. His was a level of commitment difficult to qualify, always oscillating between the common good and self-interest, between doing the best for the team and everyone recognizing him as someone essential. He arrived at Barça pissed off with Madrid, who preferred Michael Owen's kitsch to his proven effectiveness, and left the Barca club angry at everyone, unable to accept other leaderships that were not his own. In fact, it should be pointed out that he did not leave, rather they threw him out and with a year of delay compared to the initial plans of the then coach, Pep Guardiola. The Champions League that he raised with Inter Milan at the Bernabéu seemed to load him with reasons but then Wembley's, that masterpiece of choral football, would arrive to put things in place: no one, not even Samuel Eto'o, ran More than the ball.

From there Eto'o began to worry more about the economic than the sports, somewhat disenchanted because the universe seemed never to tire of conspiring against him. No recognition ever seemed enough to him and there resided much of his charm, that of the rebels with a diffuse cause – those who have none are truly insufferable – that of the winners who prefer to live as outsiders. Few athletes have represented like him that refusal to recognize himself in what they really are, except, of course, Latrell Sprewell, who was able to dispatch a juicy renewal offer by the New York Knicks claiming that he had a family to support .

In a world where perfection is demanded at every step, Samuel Eto´o taught us the beauty of the opposite: of defect, of wrinkles, of imperfection. His newly announced retirement, after a last adventure in Qatar, leaves us with a bitter feeling, as if football had already abandoned him before. And this is why a brilliant career will not be forgotten, which has long assured him the category of world football myth: perhaps now that he has stopped running he finds the necessary pause to enjoy all that has been achieved.

LaLiga Santander 2019 – 20: There is already a date for Eibar-Real Sociedad: it will be played on March 10

Do you have equipment for the Indy? Fernando Alonso is asked. And this is your answer