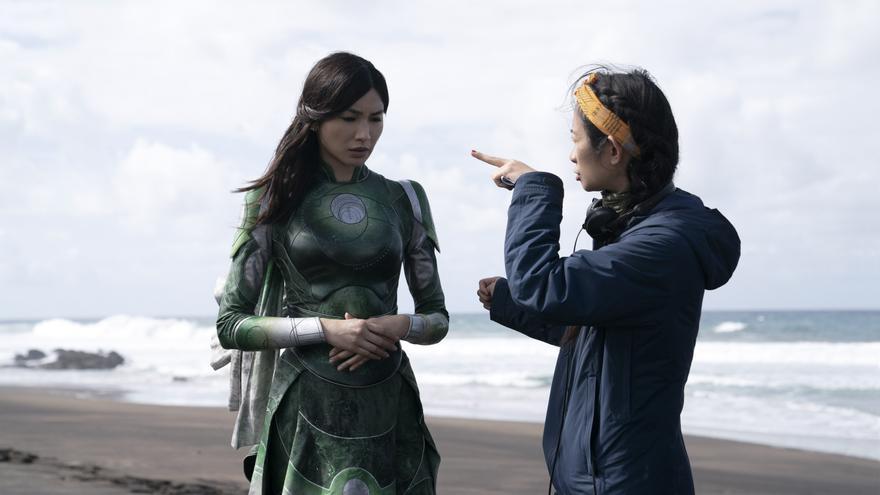 When Chloé Zhao became the second woman to be awarded the Oscar for Best Director last April by Nomadland, I was already facing the post-production of Eternals. The Marvel machine, powered by Kevin Feige, had glimpsed Zhao’s potential before anyone else and could now benefit from the signing of a female director. Oscar winner during the promotion. It is this element, above the purpose of Eternals to act as a debut for some new Avengers, the one that perhaps manages to grant the film number 25 of the Marvel Cinematic Universe -UCM, hereinafter- with a certain distinction.

And it is a sought-after distinction, which perhaps tries to impose itself on certain questions that have always surrounded its development. As is inevitable in franchises of this scale, Marvel Studios has a long history of problems with its directors. Before directing Wonder woman, Patty Jenkins was involved on Thor: The Dark World; After its resounding abandonment of the project, Marvel spent eight years without commissioning a new production to a woman. It was also traumatic when edgar wright left Ant-Man, wave frustration of Joss Whedon against the interference suffered in Age of Ultron, which motivated a change of plans about who should pilot the main Avengers saga from now on.

Scott derrickson he dissociated himself from Doctor Strange 2 due to the creative differences regarding the tone that the film should have. And James Gunn, although his sensibilities fit the designs of the dome, He was fired when some conservative voices rescued old tweets in which he made jokes about pedophilia. Ended up coming back, Yes, but it is clear that the franchise has an ambivalent relationship with the directors, or with supposed authorial concerns. Being Zhao an artist of great prestige, forged in independent cinema, Eternals It is a good occasion to discern if the existence of an authorship in Marvel is possible. I mean, one other than Chief Kevin Feige’s.

In principle, it is easy to refute this skepticism when it comes to identifying own voices in the UCM. The aforementioned Gunn, as much as his interests foresee an amount of violence and eschatology unacceptable for the Marvel machinery – not so much for his rival DC team, as demonstrated The Suicide Squad-, has always shown a love for his characters very in tune with the care of the franchise to design arches and relationships. While Taika Waititi, with his buffoonery humor, has also fitted in just enough to steer Thor away from his corseted pose. In contrast there are names like Jon Watts, Peyton Reed or the brothers Joe and Anthony Russo, whose main characteristic is professionalism: the one that led the Russo to direct a mastodon like Avengers: Endgame with unanimous praise.

Then there are isolated cases like Shane Black in iron Man 3, a striking detour that ran into the rejection of the fandom. The examples are abundant and enough to completely rule out that Marvel Studios is a machine that tames or, in the worst case, silences voices attending to a template. But the debate resurfaces every time a new film arrives —or a new series in recent months—, and perhaps it is opportune at this point to problematize the idea of ​​”author.”

It is common, within the cinema, to associate this figure with André Bazin and the Cahiers du Cinéma published since 1951, but the truth is that a theorist as early as the German – and a militant Nazi – Walter Julius Bloem was investigating similar ideas much earlier. As art of the masses in the wake of the novel or painting, the cinema was susceptible, according to Bloem, to being read by the public as a final product that an artist delivered, being the difficult thing to identify that artist. French critics agreed to single out the director and praise staging accordingly as the ultimate indication of the value of a work, but this theory – converted into politics by François Truffaut – had a weak origin, for the local.

While in Europe it was not uncommon to find directors who collaborated on the script – and therefore had a direct impact on the narrative, an element easily readable by the public -, if we shifted the focus to the United States, we were faced with a strictly collaborative regime , where the maximum power was held by the producer. This filmic genealogy is still present in our days – as it shows that in European festivals it is the director who receives the award for best film, while in the Oscars this role corresponds to the producers – but given the limitations of their postulates, the French critic knew how to find other strategies. In Hollywood the idea of ​​author was also possible; you just had to look hard for it, and understand that the creative drive — or the need for personal expression — was capable of defying industrial constraints.

Hence, these publications wanted to rescue names from the golden age of large studies, and hence the impact that their theories had in the US; first expanded by Andrew Sarris and then implemented by the New Hollywood generation in the late 1960s, benefiting from a collapsing system. As much as the birth of blockbuster modern a few years later —with Shark and Star wars– to put an end to this experience, author politics has remained since then as a basic analytical tool, which tends to assume that a work is more relevant the more clearly it locates particular concerns within it. Today, Hollywood is more like the studio regime of the 40s and 50s than ever, which does not by any means prevent its productions from continuing to reflect on this extemporaneous formula.

Adjusting to the capitalist mutations of the end of the century – with neoliberalism exalting individual subjectivities and in continuous competition – author policy has ended up becoming a new market asset. One that Netflix can draw on when it comes to selling itself as prestigious producer – calling up Cuarón, Scorsese or Fincher – and also Kevin Feige, without embarrassment attributing the success of the UCM to the freedom of the directors he hires. Nobody has been surprised since it has been assumed that if something is personal, or at least it seems, it is good.

Adding these considerations to the referent of the vignettes or to an element as little studied as the scriptwriters of the UCM – who tend to repeat more than the directors, and in the case of the Christopher Markus / Stephen McFeely duo with Captain America they show a creative temperament of surprising consistency – it is inevitable to conceive authorship as a sterile debate, especially when it seems to obey critical inertia rather than a real concern of the fandom. However, based on the disruptive nature of Eternals and Zhao’s trajectory, it may be appropriate to try to assess it by following this rhetoric.

With three feature films before Eternals, this director of Chinese origin quickly showed a great interest in the American geography, not only with a view to reflecting its aesthetic greatness but also to dialogue with the background culture that it has behind its back and is inevitably linked to the western. On Songs My Brother Taught Me Zhao explored the everyday life of an Indian reservation, while in The Rider he did the same with the inner circle of a former rodeo star. Through these characters, the director explored the heritage of the American founding myth — that is, that propelled by pioneers and channeled into a utopian land of opportunity — and rehearsed an ingenious rereading of the precepts of the western and one of its main guarantors, John Ford.

How? Throwing his avatars to a present as devastating as it is realistic, in its strongest possible expression. Zhao is aware that this genre has always revolved around the preservation of dignity in a hostile environment; Hence, in order to make his update more powerful, he chose in his first works to include in the cast a majority of non-professional actors whose previous experiences greatly resembled those of their characters. We are talking, then, of calculated crossroads between documentary and fiction, which inject closeness to classic assumptions –Nomadland as a post Great Recession review of The Grapes of Wrath– and they do not shy away from basking in the beauty of the surroundings, underlining the insignificance of their passersby as well as their indomitable courage.

Zhao has an effectively complex artistic discourse, with its obvious impostures – such as the instrumentalization of these experiences or the final docility of its reflection, exemplified by Amazon’s presence in Nomadland– but a solid one, in short, that would be very much to the liking of the critics of the middle of the last century. So we come to Eternals, a film that after Phase 3 and in tune to the seen on Shang-Chi and the legend of the ten rings seeks to present unpublished corners of the MCU through the insertion of new characters. Contrary to Shang-chiHowever, in this case we are talking about a whole superheroic group that could act as a relief for the canonical Avengers, and that weaves among its ranks new ways of relating to the world and the idea of ​​heroism.

The Eternals are not humans, but beings created by the Celestials to protect us for centuries from threats on a specific scale. That is why they did not intervene in the fight against Thanos, and that is why the plot of the film conveys the doubts of each character in terms of their saving mission. In short, it is about gods wondering why they should help us – very in tune with the contributions of Zack Snyder in the DC universe – and the answer to these doubts lies in knowing how to perceive the intimate beauty of their mundane environment and of those who they populate it. This is where Zhao’s sensitivity comes into play, worrying about portraying this beauty with his camera, and proclaiming that she deserves to be saved.

What is the problem? That Eternals evidences the current susceptibility of the authors’ policy to become a trademark, to the extent that a particularly leaden and congested script with subplots suffocates Zhao’s identity. Or rather, it reduces it to its most superficial coordinates, bringing them closer to the self-parodic. The overabundance of sunsets, in combination with a solemnity that seeks to differentiate Eternals of other affable marvelite entertainments, illustrates this coercion, and casts a product as hypocritical as it is symptomatic of the MCU’s ability to assimilate zeitgeists and capitalize on even the neuroses of the most stunted cinephilia.