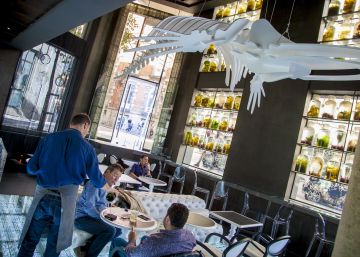 Last week, the Provincial Court of Badajoz withdrew shared custody to a waiter because, as he argued, his schedule was incompatible with the care of his children. The news, which is not an isolated case at all, highlights the double penalty (family and work) that some parents suffer for overwork. The endless days in the hospitality industry, the complicated schedules of the pilots, the firemen's guards or the constant trips of the managers, are a drag when discussing the regime of the children in the divorces.

Although not yet widespread, the shared custody It has ceased to be an exception and is already granted in three out of ten separations. According to him Supreme Court, is the "desirable" regime because it guarantees parents to participate in equal conditions in the growth of their children. This, in practice, means that judges do not penalize those who work full time, but, as family lawyers admit, in a large number of cases, if there is no real possibility of conciliation, there will also be no custody. .

Hourly availability, says Paloma Zabalgo, managing partner of the office that bears his name, "is a requirement for both shared and exclusive custody." In his opinion, Badajoz's sentence is well founded because he analyzes all the circumstances at stake and concludes that the current situation of the father is not the best for the children. It is not about committing to organize in the future, as the worker claimed. In family law, Zabalgo emphasizes, "the futures do not exist, the experiments are not worth it; what is the benefit of the children is the first thing." This does not mean that parents with more complicated schedules cannot have custody, but they should make an extra effort to reconcile.

However, each case is a world. As Rosa López, a partner of ABA Abogadas, points out, it does not penalize having a bad schedule if the other parent does not have it much better (for example, if both are managers). According to the lawyer, the judge usually looks at "how it has been reconciled in the past" and seek to maintain the situation before divorce so that minors "notice the smallest possible difference." It is not, therefore, only a matter of schedules, but also of the will of the father or mother. Although it is true that, sometimes, it is the shared custody itself (for the distribution of time) that facilitates the conciliation.

Traditionally, workers have had two legal instruments to combine family and work: leave and reduced working hours, although both entail an economic decline. Since March, however, they have a third party: the call a la carte day, which allows the employee to request an adapted schedule.

As the laborists anticipated, this reform is conflictive and in the courts the litigations already emerge. The lawyer Victor Canalda will appeal to the Supreme Court the case of a head of gardening who requested to enter an hour later to be able to leave his son in the school the days he is in charge. The company objected alleging that the schedule was imposed by the contract. The Superior Court of Justice (TSJ) of Catalonia has given the company reason by giving priority to the business organization to the conciliation of the employee.

According to Canalda, although the law does not give a subjective right to the worker but an "expectation", the judges have to weigh the interests at stake. To the extent that organizationally, he explains, the company must adapt to the needs of the employee. It will not be valid, therefore, a refusal based on the fact that "it generates a comparative grievance with its partners," the lawyer reflects. Coffee for all or the grounds of ordinary legality, he says, cannot impede flexibility if there are "constitutionally protected interests such as family protection and the prohibition of discrimination." Without a doubt, he explains, it will be problematic if there are several employees who ask for another schedule, but companies must assess the requests of those who have children to prevail, for example, over those who want to be able to go to the gym.

When will a schedule request be justified and when not? This is a very controversial issue. Recently the TSJ de Galicia said that the company cannot require the employee to prove that he has no other way to reconcile. However, as Canalda points out, there is discrepancy between courts. "There are too many gaps and many judges prefer not to get in until this reaches the Supreme and it is he who clarifies it."

While jurisprudence sheds light on dark areas, the challenge is for companies to balance their organizational interests and workers' reconciliation needs on their own. The companies, says Fernando Bazán, partner of Deloitte Legal, fear an avalanche of applications that hinder their production and can "pervert" the good end of the norm. For example, he says: "What happens if someone is hired to travel and then asks for a specific time that, in practice, prevents him from traveling?" The casuistry suggests a large number of litigation, so, in the end, "it will be the courts that will define the criteria to follow," he says. Now, as Bazán concludes, the question "should it be a reason to ask for the day to the letter the risk of losing custody of children?". The answer, at least on the theoretical level, must be that "no doubt, yes."